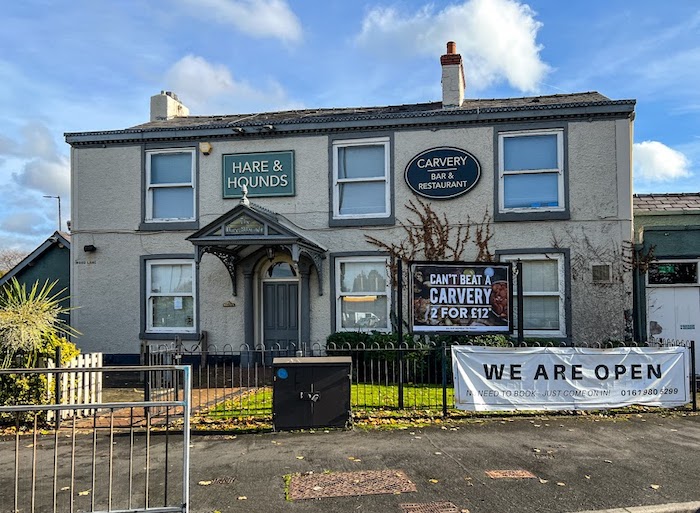 Trafford Council blocked the move, which would have seen Timperley’s Hare and Hounds pub turned into 68 retirement homes.

The Hare and Hounds has been a community pillar on Shaftesbury Avenue for nearly 200 years.

It is owned by Marston’s Brewery.

Despite the ongoing application, the pub remains open.

Churchill previously submitted plans for the site, then withdrew, but then re-submitted them in May this year.

The new plans were intended to address concerns raised by the council, from the loss of the pub as a public asset to the outward shape and appearance of the retirement homes that would be built in its place.

But the council put paid to the application October 14.

They accused Churchill Retirement Living of making ‘no amendment’ to the plans.

The planning decision said: “The proposed development would lead to the total loss of a non-designated heritage asset which would have an adverse and irreversible impact on its significance.”

It adds: “The proposed development, by virtue of its design, scale, height, massing, siting and layout would introduce an uncharacteristic and visually inappropriate development in this prominent location which would cause significant harm to the character of the area and the street scene.”

Speaking to I LOVE MCR, Trafford Council explained why they had put paid to their plans.

A spokesperson for the council said: “Trafford Council refused the application on the grounds that there were no plans for on-site affordable homes, the designs were not to the required standard and the proposed scheme was on an inappropriate scale.

“We also felt that the pub would be lost as both a community and heritage asset.”

Marstons said they were still open for business, but added that they did have a contract to sell the property to Churchill Retirement homes as and when planning permission became available

A spokesperson said: “We still have a contract with Churchill Retirement Homes and they are as I understand planning to re-submit a planning application to the council.

“The pub is absolutely still open.”

Marston’s are looking to tell the property after agreeing a deal with Churchill when they approached them with a proposition to turn the pub into a care home.

Churchill have been approached for comment, but did not respond.