Is time running out for Man United’s Luke Shaw? 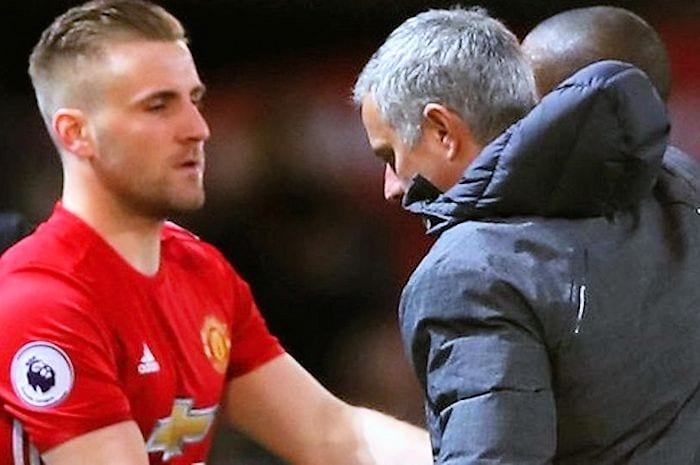 He’d just come back from the World Cup in Brazil – granted England had been terrible under Roy Hodgson – but Shaw had come out of it with his reputation intact. He signed for United in a deal worth around £30million and became the natural heir to Patrice Evra.

At 18, he could feasibly have been United’s first choice left back for the next decade.

Fast forward three years and he’s the forgotten man of Old Trafford. Currently Shaw can’t get anywhere near United’s first team. And that’s without another recognised specialist left back in the squad.

Currently Ashley Young is thriving in the position, having added a defensive side to his wonderful crossing game. When all are fit it’s likely Young, Matteo Darmian, Dailey Blind and Marcos Rojo would be picked ahead of Shaw.

There was talk this summer of Jose Mourinho being really impressed with Shaw’s work rate, application and professionalism since his latest injury setback. And that when back fit, the left back’s spot was his to lose.

So what happened and where is Luke Shaw? Has he already lost Jose’s trust again?

He recently posted on Instagram celebrating three years to the day he made his debut for United. He said: “Time flies but there is much more to come! #ProudToBeARed”. When we’re going to see any evidence of this is anybody’s guess.

Shaw’s troubled time at United has to be qualified by the horrendous leg break he suffered two years ago against PSV Eindhoven.

He showed great bravery to return to action last season, as well as the determination to push through the dark times, and the presence of mind to face it head on and discuss the injury in interviews as soon as he was back.

That much can be applauded, but there really feels like there’s something not quite right behind the scenes.

Let’s be straight. He’s not injured at the moment. He played his first full 90 minutes for the reserves at the end of August, plus another on the 8th September, before getting on the pitch for his first appearance of the season at home to Burton in the League Cup. Since then he’s been missing.

Mourinho has continually criticised his application, giving himself credit last season for directing a decent second half showing by Shaw from the touchline.

If you get on the wrong side of Mourinho, you don’t play. It’s that simple.

But the qualities that Jose looks for in his players, are qualities all professionals should be able to demonstrate. A willingness to put the team first, to do the work and buy in to his way of playing. If you do that you’ll do well under him.

Look at the way he has shaped Marouane Fellaini, Rojo, Antonio Valencia, Young and, of late, Phil Jones. A question mark must remain about Shaw’s commitment, mentality and desire to play for Mourinho.

There’s also been a few odd things. Changing his number from 3 to his preferred 23 seemed strange and hinted at a lack of confidence in his own ability to be first choice at United.

His house share with mates in Manchester was weird and not what you’d expect from an elite athlete. He also seems to have struggled with his weight.

The fans shouldn’t care what goes on behind the scenes as long as the players are performing on the pitch and there has been times when Shaw has looked the player we hoped he would be. Having struggled in his first season he shot out of the blocks in 2015, putting in some wonderful performances before cruelly suffering that most horrendous of injuries.

All United fans want to see him back to that level, but it just doesn’t seem to have happened. There’s loads of us, hoping he’ll get his chance soon and he’ll prove he still can be United’s left back for years to come. It just looks like time’s running out.