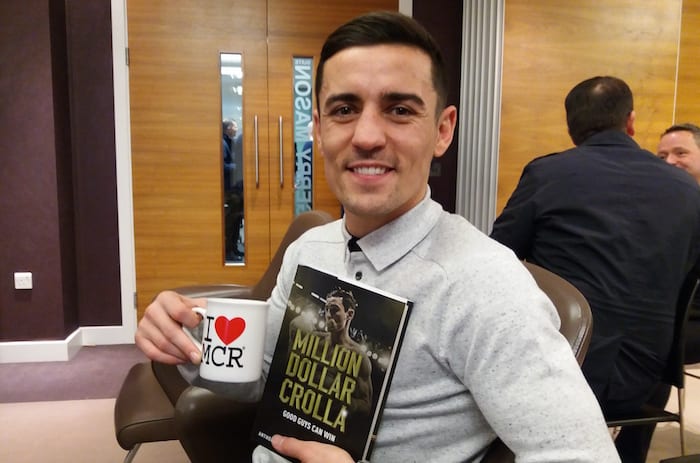 Oozing confidence at the launch of his book Million Dollar Crolla – Good Guys Can Win the former World Boxing Association Lightweight Champion said: “I firmly believe that this time next year we’ll be sitting here and I’ll be world champion again.”

He was speaking at an exclusive fan meet-and-greet event at the head office of Salford-based recruitment and design specialists Morson Group. The venue was fitting for the boxer, who benefitted early in his career from the sponsorship of Morson.

The book, co-written by respected Manchester sport journalist Dominic McGuinness, tells the unique story of the ‘nicest man in boxing’ and his remarkable path from prospect to has-been, from victim to world champion. Written off by many, an office job beckoned for Anthony Crolla before a devastating but defining fight put him back on track.

After overcoming the demons of badly injuring a rival, his boxing dreams were shattered again after a neighbourly deed left him seriously injured. But against all the odds, he fought back to win a world title in front in his home fans.

Covering key moments in a bumpy ride, the book gives a unique insight into the preparations for the biggest nights of his boxing career – a rematch with the exceptional Jorge Linares and the must-win domestic showdown with Ricky Burns.

Crolla, who recently turned 31, has been a professional boxer for 11 years. A long time in the fight game. Did it feel like a long time to him? “It sounds like a long time but really it only seems like a couple of years. It absolutely flies by. It’s scary how quickly time goes by.

“But boxing has been good to me. I am one of the lucky ones. The last fight [against Burns] really was make or break. I got the win there. If I hadn’t, maybe I’d be assessing things now, but I want to move on and get to the top again.”

Is being known as the nicest man in boxing a bit of a drawback when many fighters strive to be the baddest? Crolla chuckles and says: “No – it’s just a job, that’s all it is. I just put a mask on when that bell goes. Shake hands before, shake hands afterwards with your opponent. That’s something I’ve always tried to do. I don’t go in for all those weigh-in shenanigans. That’s never been my style. Boxing is nothing personal, it’s business.”

Was there any significance in the timing of the book? Most autobiographies come out at the end of a career. “No, no,” says Crolla, “there are a few more chapters left to write in my career. There are going to be a few more big nights and a few more titles to win.

“Anyway, it’s not an autobiography. It’s a behind the scenes look at my career, an easy-read background story to my fights. It’s been well-received and I’m thankful for it and very proud. Dom McGuinness has done a really great job and hopefully everyone else thinks that as well.”

More chapters. So what’s the next one about? “The next chapter will see me sitting down with the team next week. The promoters are coming up and we will look towards setting a date in the early part of 2018 – March maybe – for the next fight.”

Crolla says a rematch with Ricky Burns, whom he defeated in the make-or-break showdown at the Manchester Arena last month was ‘very unlikely’, adding: “I’ll be trying to move on to, if not a world title fight, then a world title eliminator. So win that and the world title shot is there.”

But what if Jorge Linares, the Venezuelan fighter who took Crolla’s world title in September 2016 and beat him again in the rematch last March – both fights at the Manchester Arena – is standing in the way?

Crolla smiles and says: “Listen, Jorge Linares is a great fighter and we’ll see what happens. Obviously if Jorge is the man I have to fight, then so be it. I know I’d have to change a few things but I think we’d work out what the best route is. I believe that this time next year we’ll be sitting here and I’ll be world champion again.”