Laugh through January with a smile as Justin Moorhouse brings his stand-up tour to The Lowry on Friday and Saturday.

If you think you can do a better job, take part in the Women’s Comedy Workshop on Saturday 19th in Hope Studios. You’ll be able to get guidance and first steps on writing your own comedy ideas as well as tips on story creation, performances and handling those all-important critical reviews.

PUSH festival continues its run (as we wrote about last week), with artistic performances and talks across the weekend including a virtual reality cinema experience and a Northern filmmaker showcase.

Further into the cultural depths we have the Moscow City Ballet performing Swan Lake in the Palace Theatre this weekend. A real treat for dance lovers. 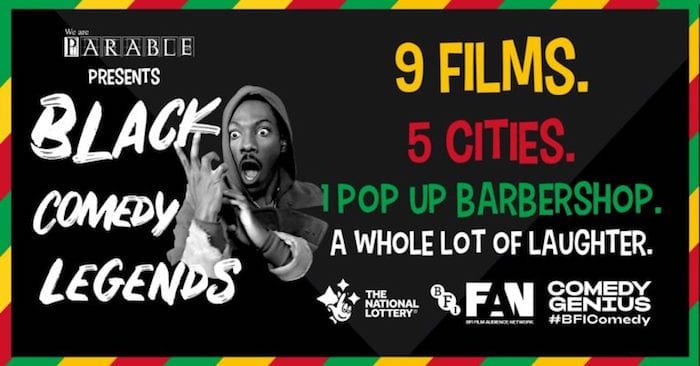 Channel 4 90s comedy Desmond’s is celebrating its 30th anniversary in 2019. To celebrate, events company We Are Parable have decided to reimagine the iconic Peckham barbershop as a pop up barbershop, making up part of their work with the BFI and their ‘Comedy Genius’ season, which will come to the Stretford Mall on Saturday.

Running from 1989 to 1993, the Trix Worrell creation Desmond’s captivated audiences young and old with stories and adventures from the Ambrose family, who ran a barbershop in Peckham, South East London.

“When Desmond’s came on a Monday night,” event co-founder Teanne Andrews reminisces, “it felt like such an event because you could recognise and resonate with all of these characters – because you knew people just like them in your own community. Trix Worrell created a real window into what it was like to be black and British in the 90s, and we wanted to celebrate that with this project.”

“Not only was Desmond’s an important cultural moment in the black British experience, it was also an extremely funny sitcom, with the late, great Norman Beaton’s facial expressions always guaranteed to raise a smile,” says Anthony Andrews.

The barbershop will be in the Stretford Mall on Saturday 19th January from 10am-6pm and Sunday 20th January from 11am-5pm, providing free haircuts to the general public and hosting free film screenings across the weekend.

GRUB, pioneers of street food and social occasions in the city, are hosting their third Winter Beer Fest this weekend from Friday 18th.

You can expect big dark beers, classic German lagers and all manner of seasonal ales from some of the best craft breweries around such as Magic Rock Brewing, Runaway Brewery, Kernel, Buxton Brewery, and Brew By No.

The festival will take place in their dedicated events space Fairfield Social Club where nearly 100 beers will be poured from over 40 taps brewed by nearly 50 local, national and international breweries.

For the first time this year, Manchester cake legend Bakeorama will have her own ‘dessert bar’ serving up specially created bakes alongside perfectly matched beers. If you aren’t a fan of beer you can still come along and have a good time as the festival bars will be knocking out mulled wine, mulled cider and a range of soft drinks.

Winter Beer Fest takes place over five sessions starting on Friday 18th January. Tickets are limited but there are still some available for some sessions.

We’re clicking the heels of our wellies together in glee as The Whitworth‘s free, play-based outdoor art sessions make a welcome return every Saturday morning from 19th January until half-term.

Even in winter, Whitworth Park is a beautiful spot, full of history, tall trees and different landscapes to walk, leap and tumble around. You may even spot the odd resident parakeet.

The sessions are different each week, but expect larks such as mud sculpting, painting in puddles and water play with channels, chutes, funnels and tubes. The little artists lead, so construction materials can become either outdoor sculptures, dens or obstacle courses – whatever you fancy.

Outdoor Art Club runs from Saturday 19th from 10.30am-12pm and is every Saturday until mid-February.