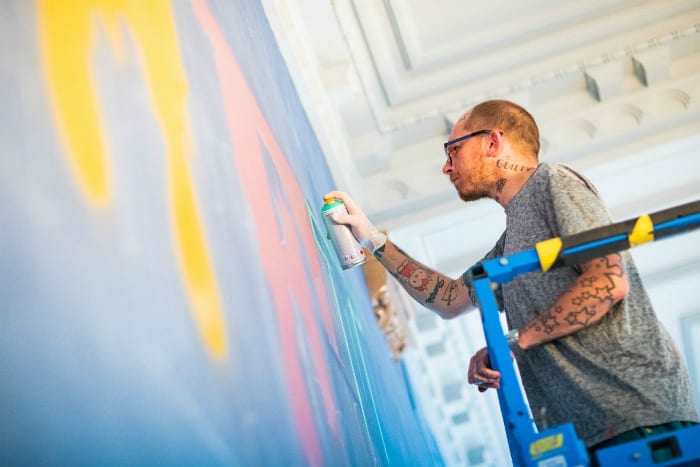 Regarded as a pioneer in the use of the letter form, Ben Eine has been working in his distinctive style for over 30 years. His instantly recognisable typographic tags have transformed streets around the world from London to LA via Mexico City, Miami, Paris, Dublin, Tokyo, Stockholm and San Francisco.

Now, the world renowned street artist is creating his first mural in Manchester, thanks to Manchester Art Fair – the UK’s largest and most respected art fair in the north.

Art in progress… Ahead of @McrArtFair world renowned street artist @beneine is creating a Mural named ‘Hell Is A City’ based on the 1960’s movie that was filmed right here in Manchester.

Together with Luke Cowdrey and Justin Crawford from The Refuge, Ben has chosen to paint Hell Is A City on the long wall. The film of the same name is one of the great British cult classics – a 1960 cop thriller starring Stanley Baker, John Crawford, Donald Pleasance and Billie Whitelaw, and directed by Val Guest.

What adds to its enduring appeal is that the film was largely shot on location in Manchester, making it an amazing record of the city as it existed a half-century ago. The Refuge Assurance building on the corner of Oxford Street and Whitworth Street was a key location in the film’s climactic chase sequence.

I spoke to Ben as he was painting the wall to discuss his inspiration, his thoughts on Manchester, and what it’s like knowing that Obama has one of his paintings.

“It’s a bit of Mancunian history,” Ben says about Hell Is a City, the inspiration for the wall. “A lot of the film was filmed in this building. It’s such an iconic movie.”

The mural, which takes over a long wall in The Refuge’s bar, consists of the artist’s trademark lettering along with some influences from its location.

“I just love handmade stuff,” he says, showing me a hand-cut stencil he is using for a black and white pattern on the mural, taking inspiration from the Winter Garden’s striking monochromatic floor tiles in The Refuge. “Everything here is hand-painted and hand-cut.”

Ben became interested in lettering as an art form when he was just 14 – over 30 years ago.

“I found this book called Subway Art, a book on New York graffiti,” he says. “This book became my bible. I did graffiti for years. And graffiti is all about exploring the letter form.” 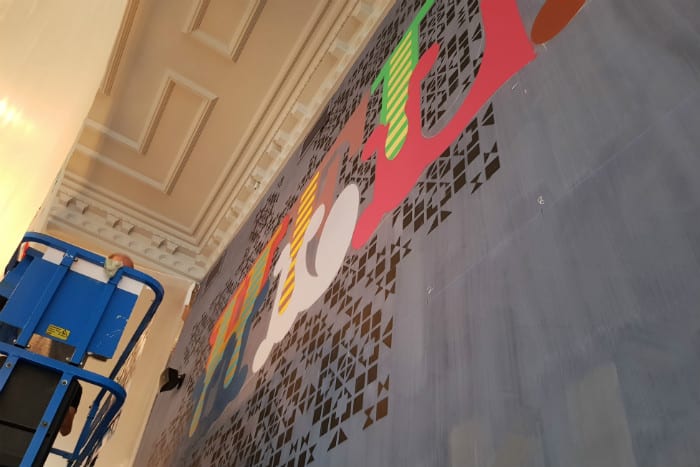 Ben’s bright and colourful letters appear on shop shutters and often spell whole words across walls – a particular area of the East End was named Alphabet City after his colourful array of shopfront ‘shutter art’.

He first came to prominence on the ‘commercial’ graffiti scene through his symbiotic partnership with London graffiti artist Banksy. In 2003, the pair set up the famous Pictures on Walls gallery together with a collective of other artists in order to print and sell street art.

But the name Ben Eine became even more widely known in 2010, when then UK prime minister David Cameron gifted a canvas by the artist to President Obama. What did it feel like knowing a president knows your name?

“President Obama knows my name. This kid from south London who did graffiti. The painting is currently hanging in one of their daughter’s bedrooms.”

It led to a huge demand for Ben’s work – one that he was not prepared for.

“When all that happened, the interest in my work went mental. I wasn’t really comfortable with it,” he says.

“I’d like to be known for my art, not just known for that one thing. The press was insane. Everyone bought my art, and not necessarily for the right reason.

“Now it’s gone more back to normal. I’m a lot more comfortable selling paintings for what I think they’re worth to people who really want to buy them. Someone who wants to live with it, rather than someone who wants to sell it in a few months time and thinks they can double their money. To me that’s one of the most ugly aspects of contemporary art.

“The art fair gives people the chance to buy my art for a reasonable price.” 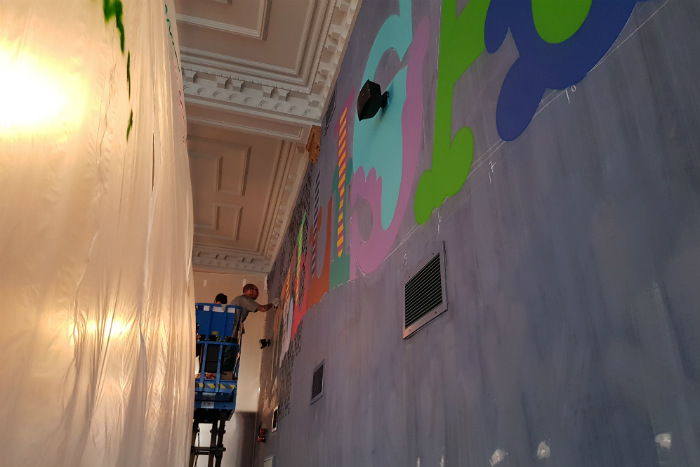 Is this the first time he’s painted in Manchester?

“I’ve done graffiti in Manchester, back when I was a vandal,” he says. “I used to come to Manchester quite a lot. Let’s just say this is the first big legal thing I’ve done in Manchester.”

“Last year we did 100 ‘Manchester’ prints, a blue one and a red one,” says Leon. “They sold out and were a huge success.”

This year, the prints will feature a Manchester music lyric – ‘dance to the radio,’ by Joy Division.

“We’re going to have 100 prints, 50 of each colour, one will be dark and one will be more disco and colourful,” says Leon. “There are three canvases, too.”

10% of the sales of the prints and the canvases will be going to Mustard Tree, a local charity supporting people across Greater Manchester in poverty and facing homelessness.

“I think even if you don’t know the lyrics are Joy Division, it sums up Manchester,” says Leon. “The love of music, the love of dancing.”

Hell Is A City by Ben Eine will be revealed this week at The Refuge at The Principal Hotel. Limited edition ‘dance to the radio’ prints will be available via art consultant Leon Martyn at the Aviva Investors Manchester Art Fair, Manchester Central, 12th-14th October.