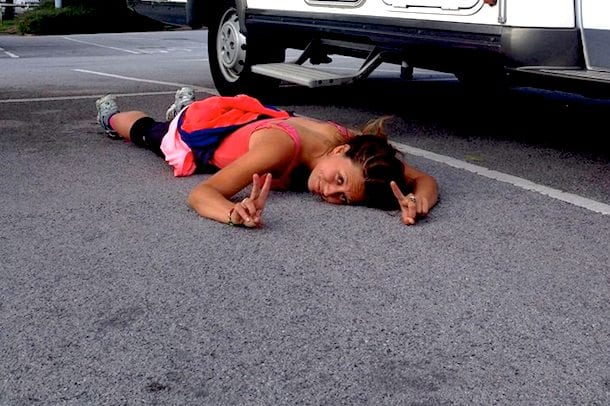 A young girl called Amy Hughes is in Manchester tonight having just completed a marathon in Stoke – an achievement in itself – but when you consider this is her 52nd Marathon in 52 Days, you start to think about your own fitness level.

“…to encourage the youths of today
to become more active…”

Fitness freak Amy, 26, is attempting to break a world record by running 53 marathons in 53 cities and towns around the UK in 53 consecutive days!!

As crazy as this challenge sounds, it’s one health junkie ‘AYMZ’ says she has absolutely relished so far and has got so much out of. The aim of the project is to raise awareness and encourage people (especially the youths of today) to become more active and live a more healthy lifestyle.

“I intend to promote and inspire healthy living to as many people as possible!” Said Amy.

“Through doing so I Intend to raise as much money as possible for a very special and worthy charity: The Isabelle Lottie Foundation. This charity aims to raise awareness of early diagnosis of Brain tumors within children and young adults.”

Amy is going to be dined tonight (but maybe not wined!) at the fantastic 47 King Street West Restaurant, but it can’t be a late night for her as she has her final 26 miles to complete at 9.00am tomorrow.

If you wish to support Amy, come and meet her at the start of her final challenge at Albert Square tomorrow morning (Saturday 27th September). She sets off at 9.00am.

Barry Hymanson, co-owner of the restaurant said; “when we were asked to support this challenge, it was without hesitation that we said yes. We are really looking forward to welcoming Amy to the restaurant, giving her a great carb-fuelled dinner and sending her on her way for her final marathon.”

Amy has already raised awareness throughout her journey and appeared on BBC Breakfast this morning.