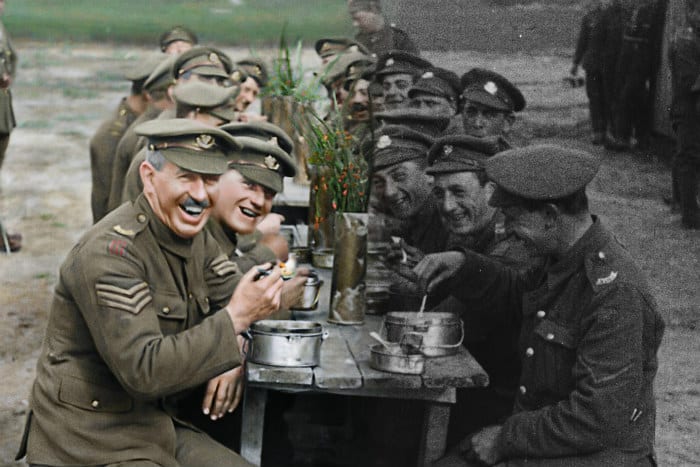 Using restored footage from WWI, director Peter Jackson (The Lord of the Rings) has made an extraordinary documentary that brings life in the trenches vividly to life.

An end credit on They Shall Not Grow Old reads “Filmed on location on the Western Front, 1914 to 1918”. The achievement of Jackson’s film is that it transports the audience to the front-line, bringing home the full horror of the experience in the process.

Working with extensive archives from the BBC and the Imperial War Museum, Jackson has applied painstaking restoration techniques to make the original 1914-1918 footage look as up-to-date as possible.

The techniques include sharpening and colourising the footage, adding sound effects, and using lip readers to recreate the dialogue of what the soldiers were actually saying. The film has also been converted into 3D, although the 3D version is only screening in limited venues.

Rather than use the footage to illustrate a history lesson, Jackson overlays the images with real-life accounts from more than 150 soldiers, their oral histories captured in the 1960s by the BBC and others.

As well as Major Victor Hawkins from the Lancashire Fusiliers, the film also includes contributions from Sgt James Payne of the Manchester Regiment, their regional accents standing out clearly amongst their fellow interviewees.

Jackson’s film follows the progress of the war chronologically, beginning with the recruitment drive in 1914 and 1915, where many of the men admit to signing up aged just 15 or 16. This is brought home by footage focusing on young faces in the lines of the soldiers.

As the accounts of the soldiers recall the details of their training, it’s clear that none of them really knew what was waiting for them at the front.

Cleverly, Jackson keeps the training footage in black and white, without sound, in 4:3 ratio (an old movie-style square screen), but once the soldiers reach the front, the screen expands to full size and the colour and sound seep in.

The effect is extraordinary. As the accounts from the soldiers become more and more harrowing, the images match their stories. It’s frequently unbearable to watch.

The details are horrific. Soldiers recall tales of fat rats (“and you knew how they got fat”), plagues of lice, trench foot, heavy boots softened with urine, and the fact that you could die if you stepped off the duck boards and into the mud.

The footage of colourised gangrenous flesh in the section on trench foot is horrific enough, but there are also shots of dead and mangled bodies, amid multiple tales of heads exploded by gunfire.

What the footage brings home, more than anything, is how much of it was sanitised for public consumption at the time. One sequence, involving a row of men’s naked arses sitting on an open-air latrine bench, is simultaneously comical and shocking.

When the men reach the front, the film becomes incredibly intense, the sound and footage of mortar shells and mines (using real-life sounds, captured by Jackson’s team) making you flinch alongside the men on screen.

Later, when the men go “over the top” and into No Man’s Land, Jackson replaces the footage with illustrations from a magazine called War Illustrated, since it was impossible for cameramen to film the attacks themselves (indeed, even the over-the-top footage is from training sessions in the trenches).

When the footage returns, the men talk about the Germans they captured, and the film takes on a remarkably humane tone as images show the British soldiers bandaging the Germans’ wounds, making them tea and joking about with them.

There is humour in the film too, from cheeky reminiscences of brothel visits to an awful but funny latrine incident, to a bit of business with a bottle (a man pretending to play it like a guitar) that could be from a Chaplin film.

However, what stays with you is the faces of the men. The nature of the camerawork meant that many had never seen a movie camera before, which is why they often stay absolutely still when the camera is on them, believing it to be like a normal camera.

With the footage colourised, the effect of that is that it feels as if they are staring back at you, as if we have been granted a window into their time and place.

The film ends on a deeply unsettling note, not just the caption informing us how many men lost their lives, but also the accounts of how the soldiers faced indifference on their return and found it hard to find work, with some businesses even displaying signs saying “Ex-servicemen need not apply”.

It leaves you with a profound desire to thank the men for everything they went through. In a sense, Jackson’s film does exactly that. It could not be more timely.

They Shall Not Grow Old is showing at cinemas across Manchester, and will be broadcast on BBC Two on Sunday 11th November at 9.30pm.