These sensational sandwiches will have you salivating until Xmas

Everybody loves sandwiches. We munch our way through a staggering 11.5 billion every year. And that’s just in the I Love Manchester office.

Little did John Montague, the 4th Earl of Sandwich know that his order of beef between two slices of toast back in 1762 (so he could carry on playing cards) would kickstart a multi-billion pound industry.

Sandwiches are often thought of as a dull lunch option. That’s probably because most people buy the same sandwich every day.

But if you think sandwiches are boring, think again. Say goodbye to tuna sweetcorn, farewell to cheese, and hello to these beauties. 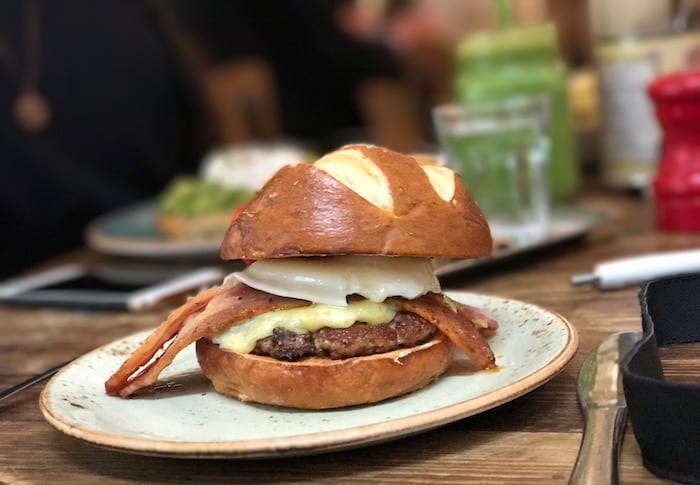 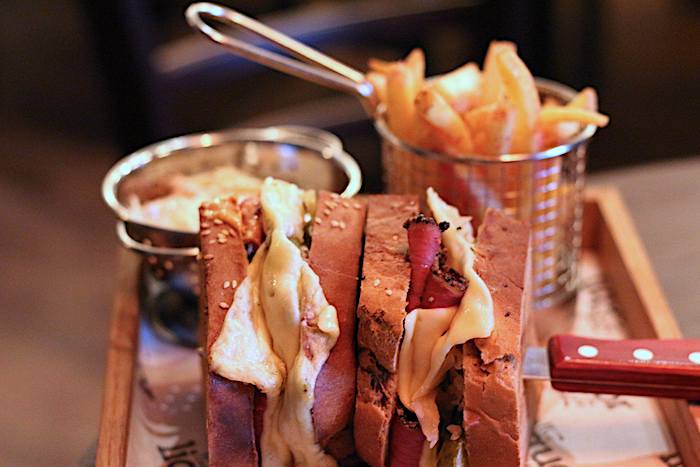 The US-style meat and cheese combo – when you are feeling like something substantial, a Reuben from The Liquor Store feels like a sandwich which has all bases covered. Layers of melt-in-your-mouth pastrami along with swiss cheese, pickles, sauerkraut and Thousand Island Sauce on toasted rye. It’s served with fries and a side of slaw too – yum.

The breakfast club sandwich at Westcorner 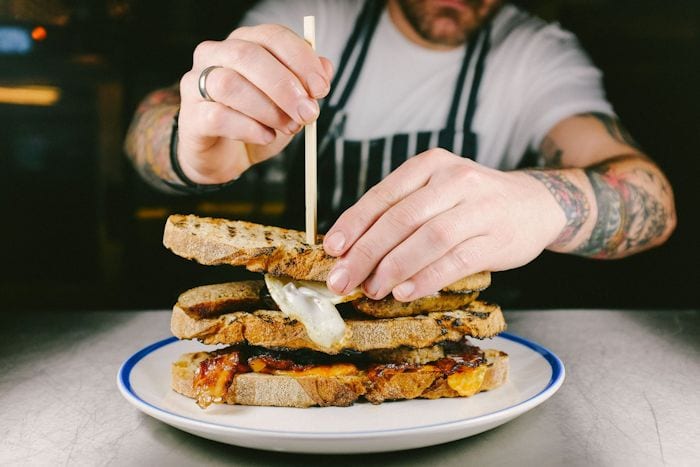 Forget boring old breakfast barms, Westcorner – a new US-inspired diner in Stevenson Square – is serving up a triple decker special to start the day. Butchers Quarter pork sausage is joined by pepper cured bacon, black pudding, fried mushroom, egg and Ballymaloe relish between three slices of bread. What’s that you say? Ballymaloe is a traditional Irish relish combining rich tomatoes with sweet sultanas. Oh, and the whole sandwich is infused with a five-cheese melt too. This is also the home of the French dip – a beef sandwich with its own dipping gravy. Sweet. 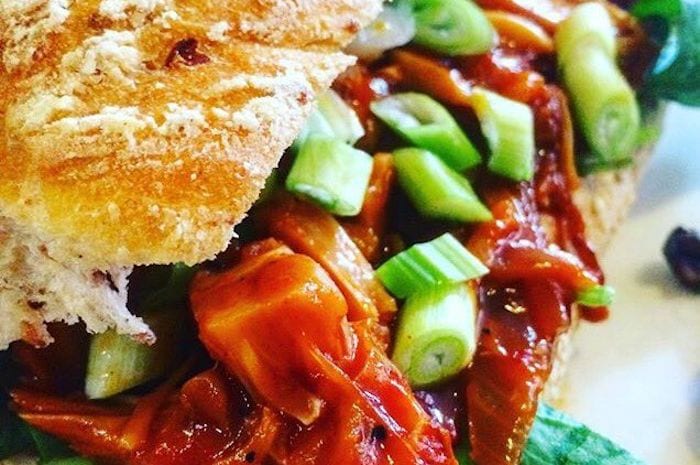 Strawberry jam is probably as far as you go to having fruit on a sandwich. But why not go a step further and try jackfruit? It’s the national fruit of Bangladesh and makes a banging butty, cooking down to the consistency of pulled pork and finished off barbeque style. You’ll love every tender, flavoursome mouthful. It’s surprisingly meaty, yet seriously vegan. Part of the even bigger hot sandwich menu at Soup Kitchen.

The Bombay chip butty at Mowgli 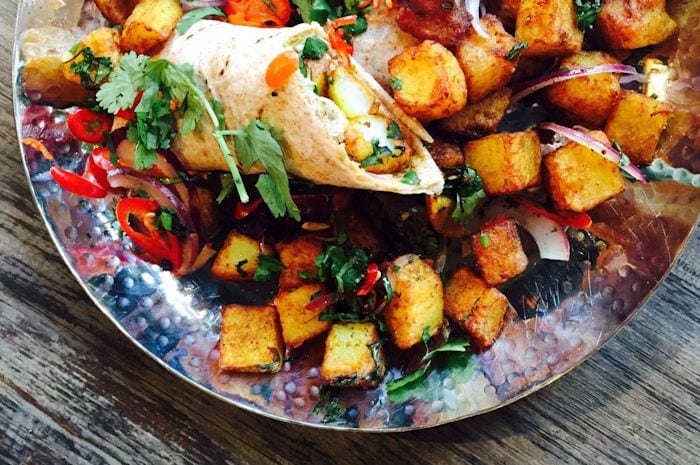 The ultimate fusion food. Nicknamed the ‘flavour grenade’, this little sandwich is served on the Street Chat starter menu at Indian Street Food restaurant Mowgli in The Corn Exchange. It’s a brave re-invention of a chip butty, bringing fenugreek-spiced turmeric fries together with chilli pickle, red onion, green chill, coriander and their signature tomato relish. You’ll get no scraps here though. Just bags of flavour. Plus it’s vegan.

The bacon (and plenty more) butty at Federal 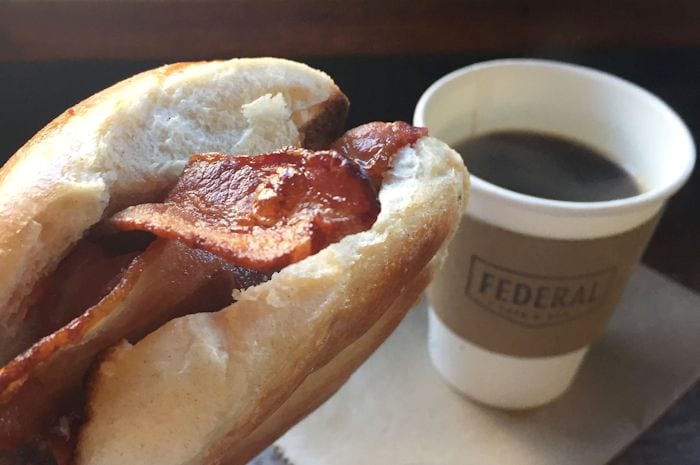 No sandwich list would be complete without a bacon butty. Federal, the Australian-inspired diner in the Northern Quarter, take theirs to the next level. Forget flimsy white bread, here they use fresh bagels, so you can pile them high with your breakfast favourites. How about bacon, egg and grilled halloumi? And vegetarians are catered for here in an exciting way too – give the citrus avo bagel a try. All sandwich options are available on gluten-free bread. 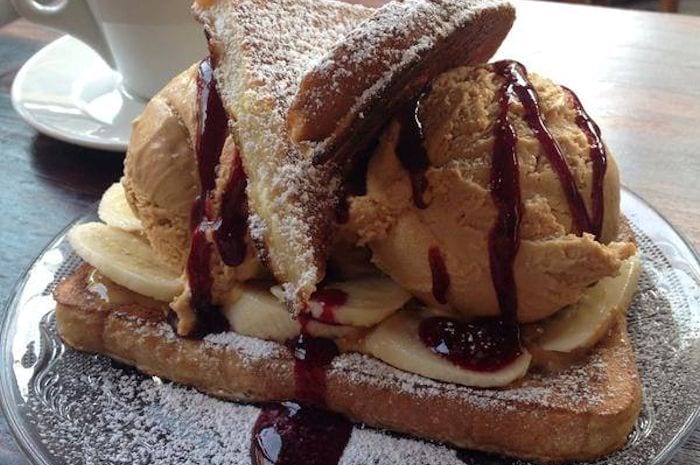 The Bikini at El Gato Negro 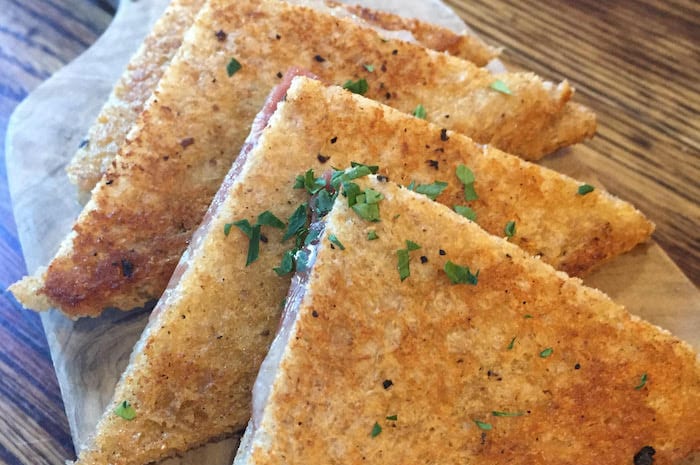 The sexy sister of the ham and cheese toastie. It’s not called a Bikini because it is skimpy. Far from it. It’s a toasted sandwich named after the famous Bikini Concert Hall in Barcelona and combines jamón Ibérico cured ham and Manchego cheese topped with truffle oil. Stripped back and beautiful, the quality of the ingredients does the talking here. Expect the best from King Street’s stylish Spanish restaurant El Gato Negro.

The Olympus feta granary at Katsouri’s 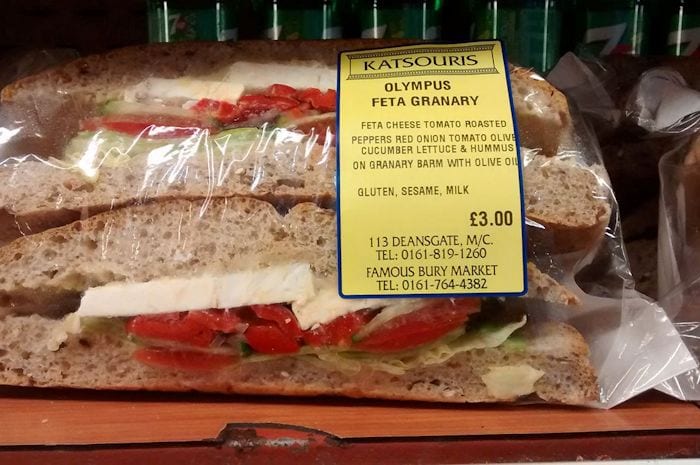 This characterful Greek deli on Deansgate is well worth the queue. The sandwiches are freshly made on-site, fillings are customisable, and they are huge. And great value. On the menu it says,’ Not eaten for three days? Try a full Ciabatta to remind you of what you missed.’ And it’s true. Half-size is still enough to fill you up for the day. We’re loving the Olympus feta granary – generous slices of feta (no gratings here!), tomatoes, roasted peppers and salad with beautiful olive oil. And practically every other sandwich they sell here.

The beer battered fish finger sandwich at The Parlour, Chorlton 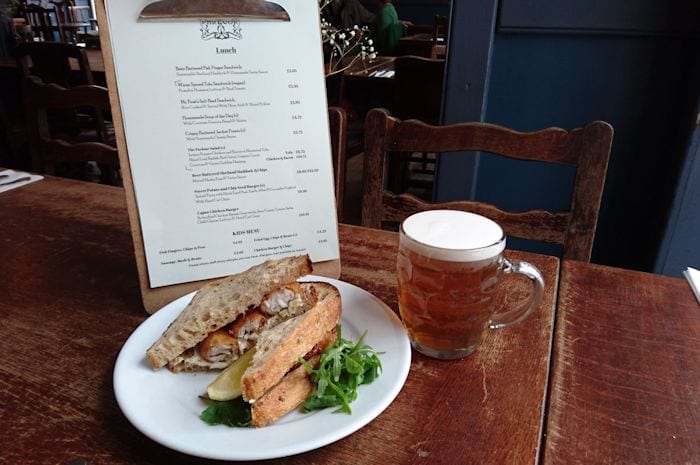 If you haven’t sampled the wonders of a fish finger butty yet, British Sandwich Week is the ideal opportunity to try. There’s something about the crispy batter, tender fish and soft bread combo which just works – and The Parlour’s creation is spot on. They use sustainable Shetland haddock, and homemade tartare sauce. A taste of the seaside just off Beech Road.

The marinated aubergine at The Pen and Pencil 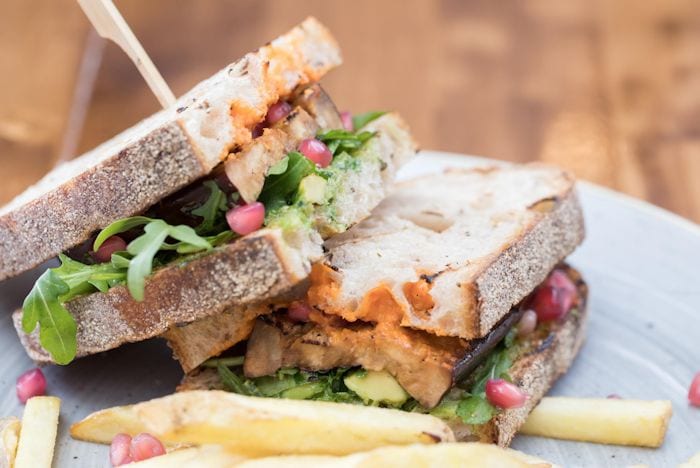 Whilst an aubergine might not seem like the most obvious sandwich filling, Manhattan-inspired bar and kitchen The Pen and Pencil serve up a marinated delight which is vegetarian too. Caraway rye bread is spread with avocado salsa then filled with grilled miso glazed aubergine, red pepper pesto, pomegranate and rocket, served with fries. Moussaka meets sandwich.

Lobster Roll at The Hawskmoor 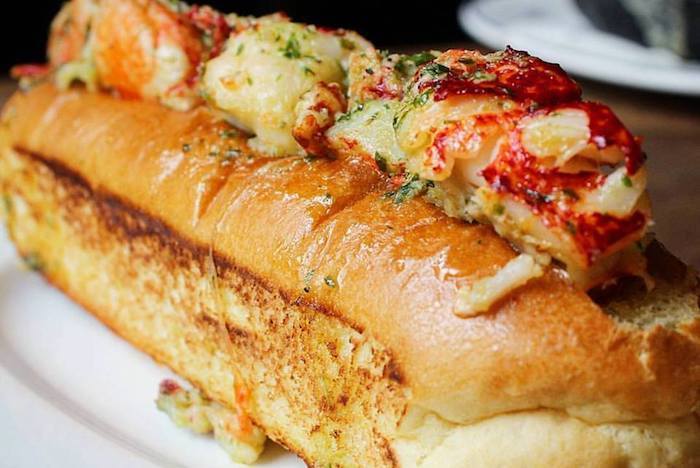 An always bustling neighbourhood spot in The Hawsmoor serve up sarnies as good as they get. They have simplicity down to a science; simple buns garnished to perfection, a few spices, garlic butter and a piled high with the highest quality lobster meat. It’s a winner.