“The worst words in the restaurant world are TripAdvisor.” Meet The Drunken Butcher 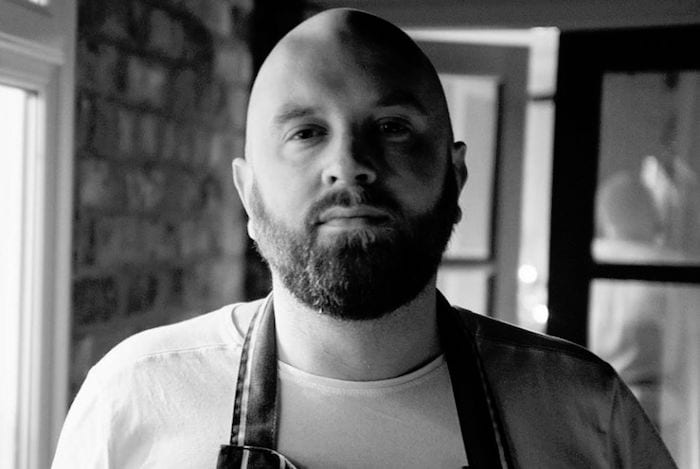 Despite sounding like the nickname of one of The Sopranos, The Drunken Butcher is actually a chef and supper club host with a passion for fresh ingredients and a more relaxed style of eating. Forget Come Dine With Me levels of awkwardness and bodging, the Drunken Butcher provides adventurous and wholesome food in an environment where like-minded foodies can fill their faces, drink and have a bloody good time.

On how a Drunken Butcher supper club works

I started Drunken Butcher in 2012 at the Manchester Food and Drink festival. Since then regular guests have become helpers and friends who now eat for free in the kitchen, in exchange for some light serving duties. I think I  offer great value as I can guarantee almost no wastage at my events as  I’m buying an exact amount rather than wondering what the customers in a restaurant will be buying that night. I can work in ways restaurants can’t due to the flexibility. For example I can get my meat out first thing in the morning to bring it right up to room temperature.

I'm a man with a plan, and that plan involves ham pic.twitter.com/oVpUXow3U0

I don’t have an alcohol license so it’s bring your own booze. I have occasionally had guests get too familiar with the bottom of a bottle and I have had to email them in the morning just to let them know they were a little bit too clattered for a supper club. A lot of people worry about the awkwardness of meeting strangers but if you come to something so specific you’re likely to meet like-minded individuals. I rarely have any problems. In nearly 150 events I’ve only ever had to bar one person for good. Lots of guests have now become good friends so if you’re worried about meeting strangers I’d say that a supper club is probably quite a good way to start.

On food fads and copyrighting dishes

The eggs and avocado obsession is probably from the US. I don’t really like eggs so I don’t bother with them. There will have been a fight as to who invented it, who was the first to Instagram it – which is the main point of eating it, or so it seems. But claiming dishes as your own is hard. You can’t be certain you’re the first but in the case of Splendid Kitchen, I’m pretty sure they were the first to do Eggs Benedict fries, which were then copied by other establishments without as much as a courtesy call.

I’m known for a pork cheek braised in chilli and soy canapé, the salt and heat of which gets people straight to the bar. I’ve never seen it done that way before but I’m sure someone in China did it years ago. I hate it when people use the word ‘authentic’ in cooking.It’s easier to be honest and credit the book or chef you got the idea from rather than pretend that you came up with something brand new – which statistically is highly unlikely.

On restaurant closures and the lack of Manchester Michelin stars

I’m good friends with Mike and Emily (owners of the now closed Splendid Kitchen) so we’re looking to do a ‘It Was Splendid’ supper club where I do a Drunken Butcher take on my favourite dishes of theirs. Splendid and Grinch are right to blame the Metrolink’s expansion, whose poor management and lack of communication effectively killed off their lunch and early evening trade.

Right now in Manchester I think that the main reason for restaurants closing is that we’ve hit saturation point. You need a lot of talent and passion to succeed at the moment. El Gato Negro are smashing at the moment because of their immense skill – I visited them after a trip to Pamplona and in my opinion, the quality was no different.

I think high end places like Quill tapped too much too soon on people’s credit cards rather than Michelin’s door, and it’s unquestionable that the Michelin guide hates Manchester. The heads at Michelin must’ve had a daughter who dated a Manchester lad who treated her badly.

Another factor is that food is too cheap in Manchester. If front of house have little experience apart form a part-time job they had in the summer holidays and they’re on the minimum wage, they’re going to let the restaurant down. 20 years ago I used to wait tables and I told a customer to “f**k right off.” After that I took my shirt off, went into the kitchen and said “I’ll be your pot washer instead.” Amazingly I wasn’t fired and ended up becoming a chef. I wouldn’t recommend that as a viable career plan though.

On new openings and the homogenisation of the high street

There’s a finite amount of diners with disposable income and if they have a bad experience they’re going to move on quickly. Burgers get mocked as hipster these days but you can’t go wrong with a messy Almost Famous date.

The trend for bottomless prosecco or other unlimited free drinks is a strange one. It used to be if you broke even in the kitchen, you’d  make profit on the drinks, especially on soft drinks and wine. Restaurants need to make money and it seems that they’re all fighting for an ever diminishing pot.  Unfortunately Manchester council aren’t famed for giving independents council tax breaks. And with there being no real, creditable opposition to them, they do what they want without question.

I’m really worried about certain aspects of Manchester right now, Tony Wilson said “we do things differently here” but if you walk down parts of Deansgate or Piccadilly you see the same fast food joints as Birmingham, Newcastle etc. It’s homogenisation of the high street. I mean the food market in the Arndale is home to some great food, but you only have to walk a few minutes till you come to the food court and think “for f***s sake.” Consumers demand too much choice and that’s what we end up with. We’re seeing the decline of some great places, some forcibly (Sir Ralph Abercromby etc) in favour of glass, steel & concrete and becoming a modern ‘city by numbers.’

Even the Northern Quarter has a Tesco Express and a Co-op Local, and a lot of the bars are owned by the same people – although they don’t go out of their way to tell you that.

Most start-ups miss the kind of drive Tim Bacon was famed for. There’s far too much ‘it’ll do.’

On complaining like a pro and the problem with TripAdvisor

I actually wrote a blog about ‘how to complain’ because customers’ expectations are wrong. The worst words in the restaurant world are TripAdvisor. It’s morally bankrupt and disgusting. I’ve witnessed people go into somewhere and say ‘I going to review you on TripAdvisor can I have free drinks.’ That’s extortion!

The problem is people still trust TripAdvisor. I’m fairly suspicious of any new opening who gets huge numbers of people who just joined TripAdvisor to post one positive review.

People need to complain in the right way. Tell the restaurant to their face rather than say ‘Yes it was all lovely’ then slag them off behind their back.If they’d actually told the place what was wrong then it would have probably been fixed and they’d have had a far better experience.

I try not to comprise. If someone has a genuine allergy as opposed to a fad diet, I’ll prepare their meal differently. If a vegan asked to come to a meat themed evening I’d say no, because there’s no point, I’d direct them to one of my occasional vegan ones.  But worse than that would be if someone came and said they were on TripAdvisor and expect something free or preferential treatment because of it. I’d tell them to get out of my house.

On the idea behind Drunken Butcher

The name comes from two things. An old poem called Drunken Butcher of Tideswell by William Bennet and from Viz – which I absolutely love! They have a cartoon called the Drunken Bakers which I flipped. I met Barney Farmer who wrote the cartoons and he had agreed to write me a one-off comic strip for Drunken Butcher which is awesome. I’d rather be in Viz than in the Michelin guide.

I think my name and Twitter presence lets people know it’s going to be informal. I hate wearing ties and long sleeved shirts, and I don’t want my guests to feel that they have to be formal. When I write menus I think what would make me happy? I have only ever made one thing for a supper club I didn’t like and that was because it had banana in it, which I dislike.

The portions are massive though I’m trying to be more realistic with that, and as I buy things like fish and veg on the day I often throw in a bonus course if I see something that looks fantastic. For things like steak, I cook it my way. I don’t ask anyone how they want it done. The only exception being one pregnant women who didn’t want to eat red meat.

On vegans and veggies

I respect veggies and vegans but they’re not coming to my steak night, I won’t accommodate them there. There’s no point. Vegan food is great, my friend Eddie Shepherd (https://twitter.com/vegetarianchef) also does great supper clubs in Whalley Range for veggies and vegans. We’re two polar opposites in the same area.  I’m a  member of the Chorlton Facebook group and any threads on vegans  I instantly mute due to the same predictable idiots posting bacon memes. It’s difficult to eat in large groups these days and satisfy everyone due to different dietary requirements.

Veggie food is really fun and it’s what I’m into at the moment. It’s a challenge for me. I know steak, chips and red wine will taste great, but this takes me out of my comfort zone.

Twitter can be a dangerous place – especially after a few beers. I’ve become a bit smarter over time and reigned myself in so things don’t come back to bite me on the arse. But, as always with writing things down rather than being able to hear them in the context of a conversation, some people will misunderstand or deliberately misconstrue what you’ve said to get themselves some attention on social media.