The story of Manchester in 101 objects: #11 mediaeval Manchester 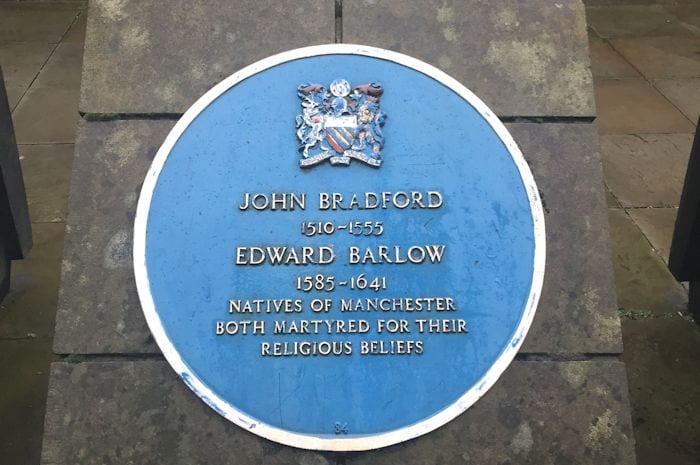 In 1596 Nicholas Mosley, a local wool manufacturer, journeyed to London to buy Manchester – the whole of Manchester – from merchant John Lacy for £3,500 and become Lord of the Manor. Mosley was knighted by Queen Elizabeth for raising money to fight a campaign in Ireland and became Lord Mayor of London in 1599.

There was not the slightest trace of democracy in what would become the city of democracy. The Lord of the Manor’s steward would appoint a jury, the Court Leet, from the freemen of the town. The Court Leet, which was based where Fopp now stands on Brown Street, ran the mediaeval town until the council was created in 1838. The jurors of the Court Leet would elect a Boroughreeve, Constables, Market Lookers, Ale Tasters, Muzzlers of mastiff dogs and other honorary officers.

These were violent times. What is best recorded and most interesting about mediaeval Manchester is the violence and religious persecution.

When Mary Tudor came to the throne in 1553, priests who had accepted the teachings of Martin Luther were in trouble. John Bradford, a local Protestant preacher, was arrested on a trumped-up charge and taken to the Tower of London as a prisoner. From there he was taken to Smithfield on 1 July 1555 to be burnt at the stake.

So large was the crowd that the execution, scheduled for 4am, was delayed. Bradford was chained to the stake at Smithfield with an apprentice, John Leaf. Before the fire was lit, he begged forgiveness of any he had wronged, and offered forgiveness to those who had wronged him. He turned to Leaf and said: “Be of good comfort brother; for we shall have a merry supper with the Lord this night!”

Then he repeated Jesus’s words from Matthew 7: “Strait is the gate, and narrow is the way, that leads to life and few there be that find it”. Bradford got off lightly. He was supposed to be burned at the stake before his family and friends in Manchester, but at the last minute the authorities relented and exacted the punishment in London so that his blushes would be spared. How kind.

Catholics later suffered like Protestants. In 1605 the new king, James I, clamped down on Roman Catholicism. Catholic priests were hanged at the front of what is now Manchester Cathedral, captured grimly by Harrison Ainsworth in his factitious novel, Guy Fawkes (1840).

Catholics often got the worst deal. Thomas Syddall Snr was a Manchester barber who was hanged at Knott Mill in 1715 for his involvement in the Jacobite rebellion to put the Catholic James Stuart, the so-called Old Pretender on the throne of Britain. After hanging, his head was removed and put on a spike at the Market Cross (where the entrance to Harvey Nichols is now).

It stayed there for nearly 30 years, until 1745, when it was taken down on the arrival of James Stuart’s son, Bonnie Prince Charlie, the Young Pretender, who had launched the latest Jacobite rebellion, the ’45.

Thomas Syddall Jnr had seen his father’s skull whitening on top of the Market Cross throughout his boyhood. In 1745 he vowed revenge against the Protestants but the ’45 was a failure and the following year he was executed for his part in the rebellion.

He was one of nine hanged for three minutes, cut down and disembowelled, their hearts cut out. They were beheaded with a butcher’s cleaver. The heads were stolen from the top of the Exchange in January 1746.

Public humiliation for transgressors continued until the Industrial Revolution when a new age of rationalism replaced superstition.

It rained occasionally in mediaeval Manchester. Hollinworth’s Mancuniensis recorded how in 1616 “An extraordinary flood, called from the day Lambard’s Flood, in which the water suddenly rose many yards plumme above the ordinary course, that men stood upon Salford Bridge, and laded up water with a little piggin. It is a easy matter with God to drowne a towne; yea, a world.”