intu Trafford Centre is a shopping destination renowned for its collection of retail and leisure brands. The largest shopping centre ever seen in the UK when it was built in 1998, it attracts more than thirty million people visit every year.

But there’s more to intu Trafford Centre than just shopping.

Michael, whose new collection of poems Mancunia will be published later this year, ventures behind its facades to ask whether we’ve been looking at this building in the right way, and to find inspiration for poetry.

As part of his mission to explore its artistic importance and enduring appeal, he talks with Manchester School of Art historian Rosemary Shirley and architect Paul Danson, who designed the centre’s food court, as well as staff and customers.

Michael has long thought of the main dome of the shopping centre as one of its most evocative and striking features, and he draws parallels between its design and the ‘stately pleasure dome’ of Coleridge’s Kubla Khan – the inspiration for a new poem he writes, The Stately Pleasure Dome, which is performed by intu staff in the documentary. 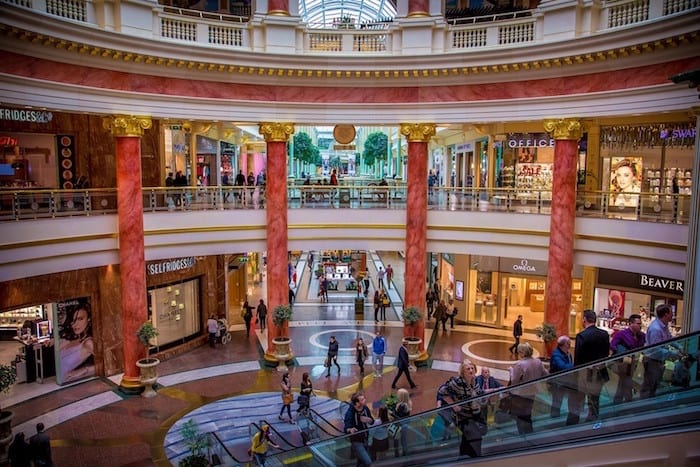 The poem describes how the centre’s iconic sense of place and design was inspired by global locations such as New Orleans and Chinatown, both celebrated in the decoration of its Orient food court.

“Early evening we reach port
The old Queen Mary brought us here
We are told there is a full moon in New York
A jazz band in the French quarter of New Orleans
In China town a summer rain is drying on the roof
In the piazza an old man is singing of lost love
This is the truth.”

Gordon McKinnon, operations director at intu, said: “We were thrilled to welcome Michael Symmons Roberts and the team at BBC Radio 4 to intu Trafford Centre for a behind the scenes glimpse of how the centre’s unique design has helped it to remain one of the country’s most popular shopping and leisure destinations, bringing smiles to the faces of our thirty million customers a year.

“This fascinating documentary celebrates the continued importance and relevance of physical shopping destinations and, in doing so, explores how they are often seen by their millions of loyal customers as much more than simply shopping centres.”

The Stately Pleasure Dome is broadcast on BBC Radio 4 on Thursday 23rd March 2017 at 11.30am. Visit www.intugroup.co.uk for more information.