The Printworks’ solar powered hydroponics system is a first in Manchester

The Printworks rooftop is the new home of a one of a kind hydroponics system previously unveiled by local social enterprise Sow the City at the Science in the City festival.

The environmentally friendly system consists of a water reservoir and pump that circulates a nutrient rich solution to the plant roots and back to the reservoir, enabling growth without soil. It’s the first of its kind to be used in a commercial setting in Manchester – and on top of a building!

The system installed uses solar panels to power the pump. Only a small amount of water is needed together with some nutrient for growth to happen. It uses up to 90% less water and can result in higher yields and faster growing plants.

The vegetable patch is already growing many varieties of lettuce, as well as chilli peppers, kale and strawberries. Once the team has fully got to grips with the system it will allow them to experiment with more products such as tomatoes, aubergines and herbs.

The award-winning urban retreat which was installed in 2012 is also home to Happy Mondays’ dancer Bez’s beehives, a wild flower meadow, orchard, herb garden and a unique hotel providing shelter and habitat for around 100 common ground beetles. 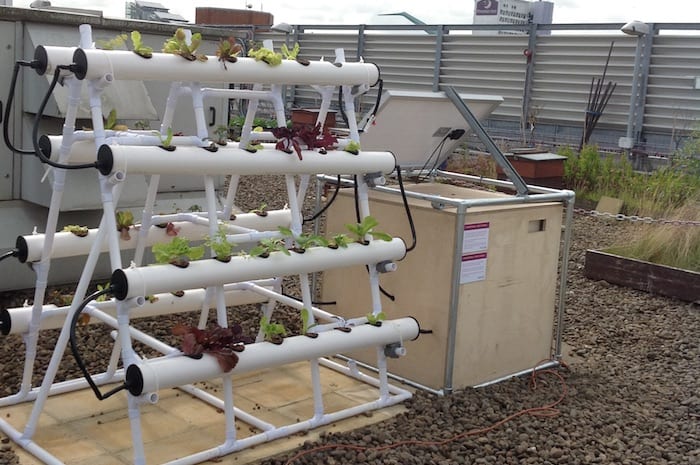 As well as housing creepy-crawlies and fauna, the project, which is a collaboration with the Hard Rock Cafe, has raised thousands of pounds for homeless charity The Booth Centre and Forever Manchester through the sale of its limited edition honey from Bez’s beehives.  So far two yields of honey in jars with labels designed by local artist Mancsy have been sold with some going for as much as £75 to keen collectors.

“We’re are very proud to be the first to be taking on an eco-friendly system for the rooftop, especially in a business environment, and hope more will take our lead,” said Print works centre director Fred Booth. “Our rooftop has had a vegetable patch for years, so it’s great to be able to keep it up to date.”

Sow the City is an award winning social enterprise building a healthier city where everyone can grow their own food. Established in 2009 with a few packets of seeds and some compost, it is now the leading specialist food-growing company in the city.

Director Jon Ross said: “We are excited to be involved in growing food in such a unique garden right here in the city centre. The Printworks’ garden rooftop is an ideal location for our solar powered hydroponics system and we can’t wait to see the results.”