The poet and the policeman: local PC publishes the work of a vulnerable man 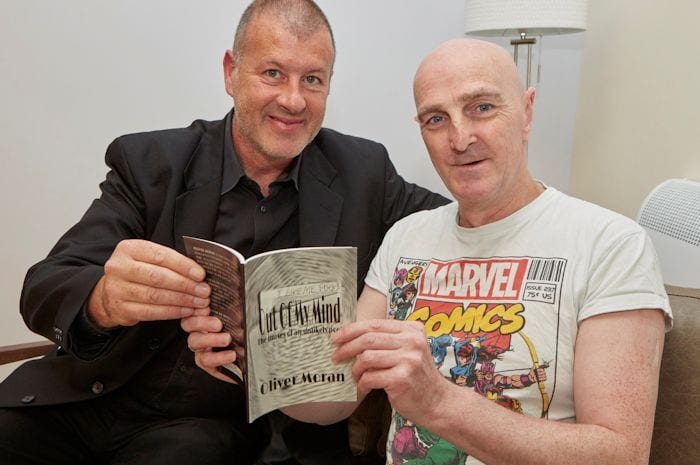 A Manchester police constable has helped a local man publish a book of his poems after hearing them recited to him in the back of a police van.

Out of My Mind is a collection of poems by Oliver Moran about his experience of mental illness which he recited as he was escorted back to his home at a north Manchester care facility by PC Paul Davies.

Little did PC Davies know that Oliver was a keen poet, often writing verse to help express his experience of living with mental illness. It was only in the police van on the way back to Brierley Court in Moston that Oliver broke the silence with a number of his own poems.

Having published four novels of his own, including Letterbox, a work about the 1996 IRA bomb in Manchester, PC Davies knew that he was hearing the work of a real talent.

He maintained contact and encouraged Oliver to collect his poems together in a book to help other people suffering from mental health issues and shed light on the reality of his experience.

Thanks to PC Davies having taken the time to listen to Oliver’s words, a talented wordsmith and endearing personality have been discovered.

“I never thought that I would be putting my personal thanks in a book that I have actually written, as things like this don’t normally happen to people like me,” says Oliver in his introduction to Out of My Mind.  “I am so grateful for having somebody believe in me and thus give others the chance to read my poems.”

He goes on to thank not only PC Davies but his family, friends, staff at the care home and the Greater Manchester Police for what he calls ‘making a dream come true.’

Oliver’s verses give a unique insight into his experience of being in care for the past 25 years with clinically diagnosed psychosis, manic depression and schizophrenia. Writing poetry proved both a refuge and a way to challenge prejudice for Oliver, who provides a blend of dialect, humour and gripping detail in lines such as ‘I like me poetry’.

The poems are strongly influenced by the city where Oliver has lived for much of his life. Now 47, he was born in Fallowfield and has spent time in various hospitals and care facilities in the area and is currently residing at the care home in Moston.

Interest in the book is now gaining momentum – with Oliver apparently delighted. Staff at the care home have also highly encouraging of his efforts, appreciating the awareness raised and it is hoped more people will pick up a copy of Out of My Mind and gain new insight for themselves.

Out of My Mind. The Muses of an Unlikely Poet is available at www.amazon.co.uk and www.padavies.co.uk priced £5.99 The money raised will split between Oliver and the charity MIND