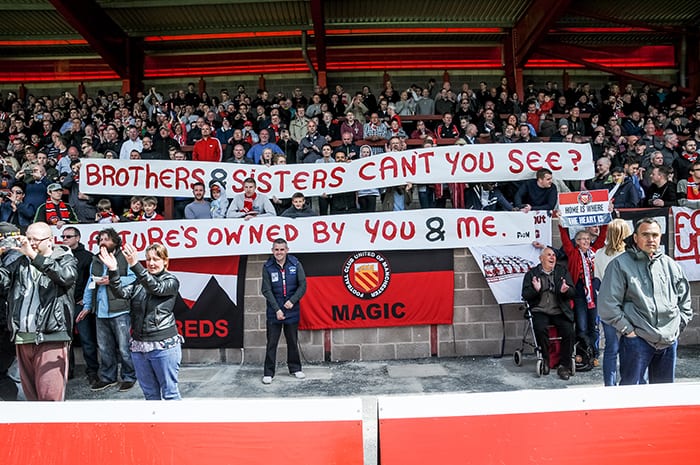 In the red corner, FC United of Manchester – the Rebels – the club founded in 2005 by passionate Manchester United fans dismayed by the takeover of the Old Trafford giants by the Glazer family. In the other red corner, Salford City – the Ammies – founded in 1940 but transformed in 2014 when the club was bought by five of Manchester United’s legendary Class of ’92, Gary and Phil Neville, Nicky Butt, Paul Scholes and Ryan Giggs.

This season the two clubs, sharing a common heritage but with philosophies as different as chalk and cheese, are rivals in the National League North. They have faced each other twice, Salford running out 1-0 winners on their home ground and recently scoring a 3-0 triumph at FC United’s showpiece Broadhurst Park stadium in front of  more than 4,150 spectators, an unprecedented gate for the sixth tier of English football.

While some Salford City fans may have been disgruntled by the five Red Devils’ stars selling half the club to Singapore-based billionaire Peter Lim – they each now own ten per cent – most have been carried along by the team’s ambitious plan to play in the Championship within 15 years and the stardust applied by a BBC documentary about their rise and rise.

Meanwhile FC United, a club owned by its fans, democratically run by its 4,000 or so members and governed not only by a unique 23-page constitution but also a club manifesto appears to be at a crossroads since making dramatic strides through a series promotions from their launch in football’s tenth tier.

Following a summer of discontent which saw the resignation of the board and the election of a new one, FC United of Manchester are currently 13th of 22 in their second season in the National League North. The club’s own match report following their defeat by Salford City reflected an air of resignation: “Backed by owners worth billions, Salford are on a fast track towards the Football League. As such, the Ammies were always going to be tough opponents. Salford were worthy winners and could have had a hatful of goals,” it said.

The driving ambition that saw FC United invest £6.3m in their new Moston home seems to have faltered, but board member Sam Mullock said the club was making progress in addressing a “huge fund-raising challenge” to enable it to meet its commitments and finish off the last bit of building work at the stadium.

“We have made our members and the wider public aware of the financial challenges and we are doing okay in terms of progress. However, we need to be doing better,” he said.

He described the National League North as a tough league containing a number of former Football League clubs such as Stockport County, Kidderminster Harriers, Halifax and Darlington, some playing full time. “Our playing budget is limited and our philosophy is that we have to cut our cloth accordingly.

“It’s only our second season in the National League North. Last year our aim was to consolidate in the new ground. This season we are mid-table, but our ambition remains clear – to go as far as we can go while staying true to our founding principles. We will not gamble the future of the club by paying the highest wages. What counts most is that we are football club with a social conscience that puts on a match-day experience that fans enjoy.”

Was the takeover of Salford City by the former Manchester United stars the worst thing that could have happened to FC United? “I don’t really think it had much of an influence on us,” said Sam. “We have our principle of putting fans first. Theirs is different. I just think it’s great for Manchester that we have such a thriving football scene from the top of the Premiership to the top of non-league.”

Noon next Monday is the deadline for resolutions to be submitted for debate at the club’s General Meeting on March 30. It will be a chance for members to vote, amongst other things, on the price of season tickets and membership for next season.

It will also provide members the opportunity to pronounce a verdict on the troubles of 2016 and an indication of where they go from here.