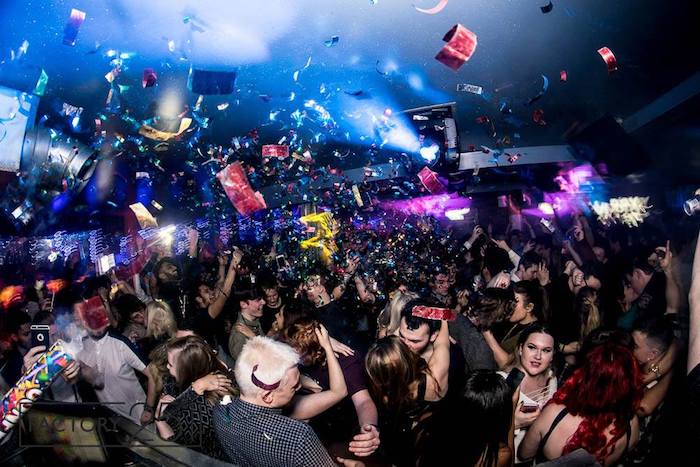 This year I will be playing my thirty-first consecutive New Year’s Eve to a congregation of happy clubbers at FAC 251. I was there last year and had a lot of fun, even though 99% of the crowd was less half my age. I was so energised I even braved the night bus home. Why would you willingly pay £40 to get a taxi from town to West Didsbury?

This year I turned down the chance to play a second set elsewhere. I used to do two a night. New Year’s Eve 1998 I went over to Cream in Liverpool, then came back to Manchester for an event at Granada Studios Tour. The promoter was Sacha Lord who now runs the Warehouse Project.

I can’t recall New Year’s Day ever being a big night in eras gone by, but I can see the rationale. These extra events don’t just feed the hunger for good times but also meet the need for an alternative to New Year’s Eve but without the enforced jollity of the midnight chimes, the ticket prices and those taxi fares home.

I like the challenge of the midnight chimes ritual, though. Building up to midnight, choosing the right records to match the mounting excitement, and then, of course, at midnight, you unleash a big tune.

Your choice of midnight tune is something you spend weeks thinking about. I have three options to hand – a choice of one of the big records of the year, some classic, or something no-one would expect.

One year at the Boardwalk, my friend Lemn Sissay walked onstage at midnight and read a poem.  It made a nice change from following the chimes with Candi Staton’s You’ve Got the Love.

Ideally, you cope with all eventualities, although that’s not always possible – as I learned on New Year’s Eve 1989/90. I had been DJing for a few months at a club called Isadora’s under the Corn Exchange, on a night run by Dave Booth and Gino Brandilani.

Dave was the DJ in the main room, playing a mix of psychedelic stuff and the likes of Stone Roses and Inspiral Carpets, and I was in the smaller room playing hip hop, electro, and stuff like Wood Allen’s Airport 89. I had one giant speaker in my room, which blew up every few weeks due to condensation and/or beer in the electrics, and it took an age to repair.

New Year’s Eve 1989/90 was my last night there. At about fifteen minutes to midnight, the speaker blew again and, knowing how long it took to get it back up and running, I realised not only my big build-up had been cut short, but that instead of chimes and a big tune at midnight, there would be silence.

The crowd started booing. I knew it would probably take until at least quarter past twelve to get the speakers up and running, maybe longer, and I’d soon start getting customers wanting their money back. I’m sorry to say, I let myself down.  I let everyone down. There was a back fire exit onto Fennel Street. I grabbed my box of records, took a left out of the DJ box, pushed my way out through the back fire exit, hurried on to Corporation Street, jumped into a cab and I was home by midnight. I didn’t get paid and I never went back.

My most memorable, though, was exactly twenty years ago. I played a set at the Boardwalk on Little Peter Street, a club I’d been associated with since its opening weekend in 1986, and then I walked the two hundred yards up the road to my other home-from-home, the Hacienda. At both places I was among so many friends, and really that’s always the best New Year’s Eve, whether you are working, or out enjoying it. You want to spend those midnight hours with friends.

At FAC251 there will be an enthusiastic crowd, but not so many friends. A lot of my generation have fallen out of love with New Year’s Eve. It might be the hassle or the cost or it might be that as you get older, the sense of optimism about the future is harder to sustain. The best we can offer is “I hope 2017 isn’t as bad as 2016”. Which is hardly a reason to cheer when the chimes play and the big record kicks in, is it?

Come the big day, I’ll be reminding the club to check the speakers to ensure the technology doesn’t let us down, and sorting my records. And no doubt some of my old friends will message me to ask me to put their kids on the guest list, and I’m always happy to do so. Passing on the baton to the next generation of 24 hour party people, and guaranteeing a room full of dreamers, optimists, and big hopes.