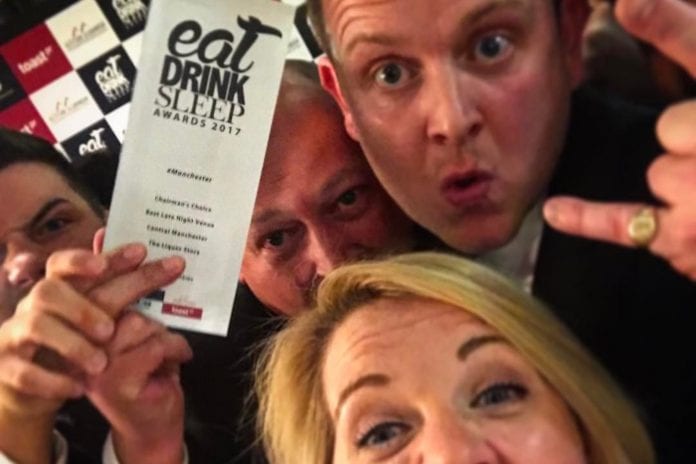 The Eat, Drink, Sleep Awards give you a pretty good idea of who’s hot and who’s not when it comes to the hospitality industry.  The ceremony is held every two years with a shortlist drawn up from open nominations. It’s then put to a public vote over a two week period to decide the winners.

The great and slightly tipsy of the industry headed along to last night’s red carpet event at Manchester’s Piccadilly Mercure Hotel where The Liquor Store, The Bierkeller and George’s Worsley were amongst the winners.

The Liquor Store co-founder Brett Collier said: “It’s great to win this award. We really pride ourselves on hosting a great late night party and this is recognition we are still hosting the best late night party in town, so make sure you come down.”

The Liquor Store has Mancunian roots through and through. It opened its doors in November 2012 on the corner of Blackfriars Street and has been going from strength to strength ever since. A second bar opened on First Street last year.

Bare brickwork, vintage signage and a bar chock full of expertly crafted concoctions from around the globe are just some of the features that the Liquor Store boasts. The bar plays all of your favourite jangles and whilst there’s no strict dress code, dressing to the nines for a late night shindig is definitely encouraged.

Co-owner Doug Waldron said: “I’m absolutely buzzing. Our Deansgate bar is a late night venue open until 3am every night for party and industry people alike. So thank you to everyone who voted for us. See you at the bar!”

Having won the Chairman’s Choice Award for Best Bar at the last Drinkies two years ago and now this, we have a sneaky feeling this won’t be the last time The Liquor Store brings home a trophy.

The man behind the awards is Paul Kilroe, who wanted to celebrate the achievements of the hospitality industry. He said: “People used to come to Manchester for Coronation Street or Old Trafford. Now they come for our restaurants.”