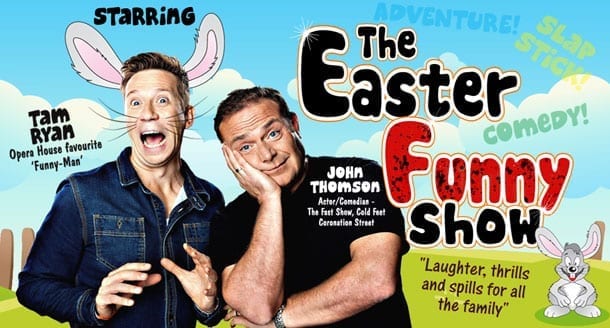 .”John and Tam have been specially chosen as guardians of the legendary Golden Egg of Easter but the timing couldn’t be worse as they are performing a family comedy extravaganza at Manchester Opera House. To make things even more complicated… enter Bad Egg Billy – the evil egg rustling cowboy of Salford. Can the show make it to the Grand Finale? Will the boys save Easter? And why are Chinese Takeaways closed on Tuesdays?”

The Easter Funny Show is written, performed and produced by John Thomson and Tam Ryan and features a strong supporting cast. In creating the show, John and Tam saw a golden opportunity for families to bring the comedy and adventure of a Christmas panto to the Easter Holidays. John says: “We decided to write a genuinely entertaining, affordable family show that would appeal to absolutely everyone, in the same vein as pantomime. We thought… why isn’t there a show that won’t break the bank, will give the kids a story to follow and provide laugh out loud moments for the whole family to enjoy? Well now there is, it’s called the Easter funny Show!”