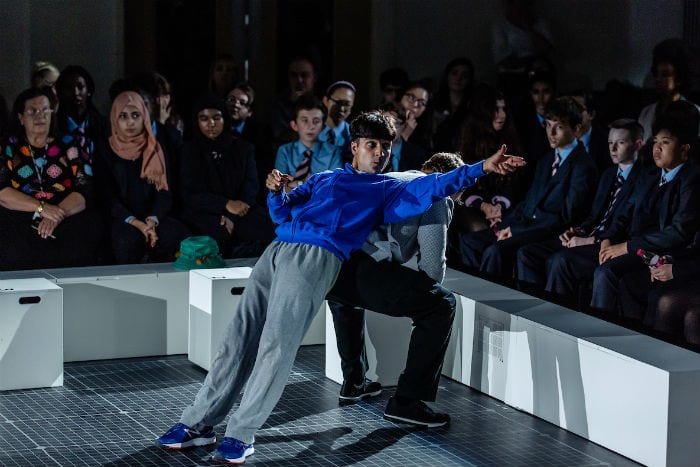 A specially staged production of the National Theatre’s award-winning play, The Curious Incident of the Dog in the Night-Time will visit 17 secondary schools in Greater Manchester this winter.

In partnership with The Lowry, the tour is part of the National Theatre’s drive to introduce new audiences to theatre. The aim is to to reach young people who may not have previously had many opportunities to see much professional live theatre.

The Curious Incident of the Dog in the Night-Time brings Mark Haddon’s best-selling novel to life on stage, adapted by Olivier Award-winning playwright Simon Stephens. The novel has won more than 17 literary awards and is widely studied in schools. Simon Stephens’ adaptation is a set text for GCSE English Literature.

The play tells the story of fifteen year-old Christopher John Francis Boone. He stands besides Mrs Shears’ dead dog, Wellington, who has been speared with a garden fork. It is seven minutes after midnight and Christopher is under suspicion. He records each fact in a book he is writing to solve the mystery of who killed Wellington.

Christopher has an extraordinary brain, and is exceptional at maths while ill-equipped to interpret everyday life. He has never ventured alone beyond the end of his road, he detests being touched and distrusts strangers. But his detective work, forbidden by his father, takes him on a frightening journey that upturns his world.

The schools tour is a 90-minute version of the play and will be followed by a Q&A session for students with the company. The tour is accompanied by a learning programme which includes professional development for teachers, as well as curriculum-based resources and workshops.

“It means the world to me that Curious Incident will be touring schools around the country,” said Simon Stephens.

“I have seen first-hand how inspiring drama is to young people in schools. I believe the arts to be fundamental to our society. We can’t afford to lose them from our education system. I am delighted that our play will play its part in introducing young people to the theatre.

As arts and drama is being increasingly marginalised in schools due to budget cuts and time pressures, the NT is bringing theatre directly to the pupils to give them the opportunity to experience it at school.

“We’re delighted to be touring this award-winning play to schools, and via our Theatre Nation Partnership with The Lowry, we hope that bringing Simon Stephen’s brilliant Curious Incident to young audiences in the Greater Manchester area will help to spark imaginations and encourage participation in theatre.”

The tour will start from Monday 19th November and will visit schools across Rochdale, Stockport, Oldham, Wigan and Salford.

“This is an amazing opportunity for our pupils to be inspired by theatre,” said Luke Tennant, teacher at All Hallows RC High School in Salford.

“Many of them haven’t been to the theatre and to see a show at this level of technical and artistic brilliance will open their minds. It is a privilege to be able to host this and a fantastic gift for the children and young people of Salford to see it.”