The Curious Case of Cheeky Changos

There’s something which has been puzzling Mark Jorgensen for quite some time – why there’s always a queue outside Changos on Oxford Road.

Most Sundays I carefully prepare a healthy and nutritious lunch for Monday at work. It’s placed in a little Tupperware box in the fridge, sometimes with an accompanying sauce or garnish to be kept separate until the last minute. We’re talking Michelin star type stuff.

I then mentally congratulate myself for doing so and vow that this is how I will do things moving forward as a newly functioning human grown up.

Unfortunately, what usually happens is that I either eat it before Sunday is out, or I forget it to take it to work on Monday morning and spend a fortune in Philpotts at lunchtime. Every day for the rest of the week. It’s an expensive but delicious foible.

Working near the Portland Street/Oxford road intersection, I’m not short of delis, supermarkets and restaurants to choose from, but one place around there which has always puzzled me is Changos.

Opened a couple of years back, Changos is a Mexican burrito bar and has quietly become one of the most popular lunch venues in the city. Every time I’ve walked past there at lunch time, there are queues snaking down the road. Through rain, hail, gales, snow, our plucky Changoers bravely wait it out. All for a burrito? 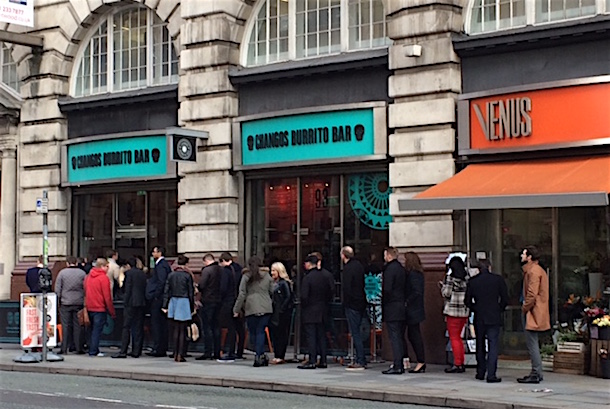 Don’t get me wrong, I like a burrito as much as the next person, but I can’t for the life of me envision a situation where I’d queue halfway down the road for one, particularly when surrounded by so many other options.

For a while, I began to suspect the place was a front for some kind of cult recruitment agency, but having been once about a year ago, I discovered they did in fact just sell burritos as advertised. This just made the die-hard popularity of the place even weirder to me.

Was it that good? My memory of it is hazy, but I remember at the time thinking it was a nice burrito, but certainly nothing to brave Hurricane Donald in October for.

I then asked a few colleagues who go a lot, and they all raved about how amazing it was. A-m-a-z-i-n-g. I watched each of them closely for the glassy-eyed stare and programmed rhetoric of a burrito-bedazzled Manchurian candidate, but saw nothing obviously suspicious.

Perplexed and hungry, I wrapped up warm, downloaded an audiobook and joined the queue to give it another try to see if I could get my head round it.

I went for a large chicken burrito with a can for £6.95 and it’s the usual production line burrito process. I must say that one thing I do like is the fact they don’t charge you extra for all of the rudimentary aspects of what makes a burrito a burrito, like other places do. You know the type, adding a cheeky 99p here for cheese, £1.50 for onions and peppers there, which all sky rockets the initially reasonable-sounding price once you’ve actually made a burrito.

That aside, the size of the large burrito is not exactly very large, and they are a tad stingey on the meat. So much so, in fact, that the lady serving me even took a little back off having felt she’d spooned a bit much there. Imagine that.

In terms of taste, the oak-smoked chipotle sauce is really good but, otherwise, it really is just a nice burrito. Nothing more, nothing less.

This puts me back at square one. I don’t really get it. Do you love Changos? If so,why?