Join me on a journey to the end of the Bury Metrolink line in search of a new cake shop and the woman behind it.
Share
Tweet
Share
Chat

Lilli Oliver Cakes is the new venture of Vedia Glover. She’s gone from a running a custom cake business at home to opening her first shop. Her signature offering is the ‘freakshake,’ an even more calorific version of the classic milkshake with ice cream, cream and sauce (chocolate fudge, salted caramel, strawberry or lemon) all topped off with a doughnut or piece of cake and then a sprinkling of something else sweet. Because, you know, why not?

You started baking seriously about 5 years ago. Was there anything in particular that changed in your life then?

I was working part-time as a teaching assistant after I had my children and was paying my childminder more than I was earning, so it was one of those “What do I do?” moments. I spent a lot more time at home baking, put a few of my pictures on Facebook and it just snowballed. I started getting orders from friends and family for cupcakes, then I started doing custom cakes.

You’d had no training at all?

No, I taught myself. Then in September 2015 I started a course because I wanted to train in pastry, become a professional. I started at college and the idea was to maybe go and be a pastry chef for about a year, cut my teeth in the industry and then open my own place. But as fate would have it, the shop came up. I’ve been looking for the right place for about 10 years. I’ve always wanted my own place like a coffee shop to get out of the rat race. It was the windows that I feel in love with. I was like “cake shop windows!” like something out of a Dickens novel.

You opened in March this year. How have the first three months of business been?

We hit the ground running. I finish at college in three weeks, so it’s been crazy. I also rent the shop out now and again on a Sunday as a private party venue, like for baby and bridal showers for afternoon tea. I love it, but it’s been an absolute whirlwind.

Tell me more about the products you make and sell.

Oreos are one of the few foods I think are vile.

That’s great! You can have some strawberry cheesecake then because I can’t give it away!

Tell me about the freakshakes.

I came across them on Instagram, they’re from Australia. What the Australians are doing is really ahead of the game. It was when I was starting so I did them at home, photographed them and everyone loved them so I thought I would introduce them in the shop. I did a bit more research and I thought nobody else was really doing them. I opened at the Easter holidays and everyone’s been enjoying them.

What about the cakes?

I have a ‘showcase cake’ which people oooh and aaah at but we do cupcakes, cheesecakes, brownies, things like that too. It’s a learning curve for me because I want to give people what they want, so I’m trying different things. 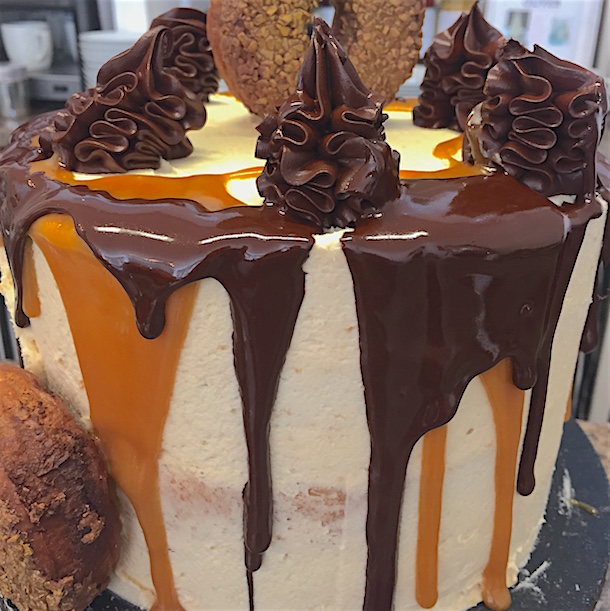 Social media seems to be a big part of your publicity. Would you say that’s how you get a lot of your business?

Yes, definitely with the freakshakes. Although I also get little old ladies coming in saying “We didn’t know you were here! Have you got any leaflets?” I am getting a lot of word-of-mouth people coming in as well. That’s helping, although I think I’ve got to get leaflets and be like Mary Portas giving out cupcakes and leaflets on the street saying “You, here, taste this!”

The shop’s not named after you but after your grandmother. Why is that?

I used to stay at her house every weekend when I was little. Just seeing my grandma at the sink or at the cooker, that home comfort food thing. I loved her to bits. She died when I was about eleven and it was my first death. I wanted to honour her. Having the name I’ve got, Vedia, I’m sick of it, being on the phone saying “VEEE-DEEE-AAAH” so when it came to doing the cakes and name I thought I needed something quite traditional. Her married name was Lally, so she was Lilly Lally, which was a bit of a tongue twister. I asked my mum and she said her maiden name was Oliver, so that stuck, rather than Lilly Lally Cakes. Or doolally cakes! [Vedia cackles]

So, the $64,000 question – is it worth the trip? Absolutely. And a party of seven who had driven an hour to get there seemed to think so, too. This is not a case of style over substance, in contrast to some cake places that have popped up over the past few years. The cheesecake was light and creamy, and the salted caramel cake with white chocolate ganache was pure bliss.