Another chapter in the story of the Class of 92. 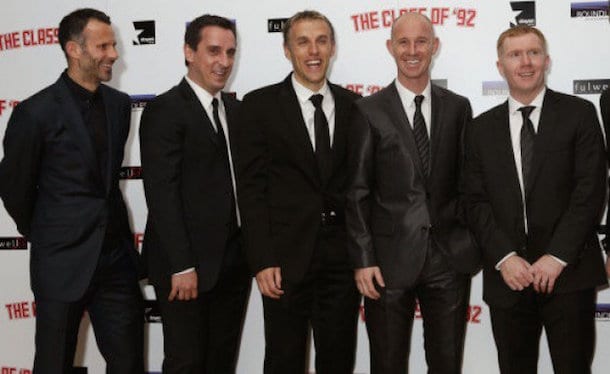 In case you’re not a football fan, last night Salford City beat Notts County in the first round of the FA Cup. Although Notts County are three tiers above Salford in the FA pyramid, it shouldn’t come as too much of a surprise. Upsets happen quite often in the FA Cup. But there’s another reason why we shouldn’t be too surprised. Because this wasn’t just an ordinary football match. It was another chapter in the story of the Class of 92. And just like the TV documentary, Class of 92 Out Of Their League, it had a happy ending.

The story so far. Six lads join a football club and win everything it is possible to win and a bit more – 120 medals and 389 international caps between them to be precise.

“If this was
the plot of a
film, people
would find
it hard to
believe”

Five of them – Ryan, Nicky, Paul, Phil and Gaz – are from Manchester. When they retire, they decide to buy a football club. It beats watching DVDs and playing golf like most retired footballers. (The sixth, a cockney called David , disappears and is never heard of again).

In their first season in charge, the club is promoted. The following season they get through to the first round of the FA Cup and beat Notts County, the oldest club in the Football League. This brings us pretty much up to date.

If this was the plot of a film, people would find it hard to believe because it reads like something out of Roy of the Rovers. So where will it all end? If past events are a predictor of the future, it will go something like this.

In the next round of the FA Cup, Salford get an easy tie in the second round and in the third round they are drawn at home against Manchester United. Salford decide to play the game at Moor Lane rather than switch the game to Old Trafford because Phil enjoys helping Babs the tea lady serve the half time pies and drinks from her refurbished kiosk.

A 1,400 capacity crowd watch United have most of the possession but struggle to score. Salford get a last minute penalty and knock United out of the Cup.

To cut a long story short, Salford make it to the FA Cup Final but they are suffering an injury crisis. They have only one fit striker and top scorer Gareth is on a modelling job in Germany so they put Paul on the substitutes bench, despite the fact that he’s a couple of stone overweight. He comes on in extra time and scores a wonder goal despite feeling the effects of a long lunch.

Amazing scenes, unreal match! Not one to forget in a rush.. #FACup #TheAmmies #giantkillers @ Salford… https://t.co/QizWN4yk6h

So far so good. Looking further into the future, Salford win promotion in successive seasons and move to a 75,000 seater stadium near Media City. In 2021-22, they win the Premier League and the following season the Champions League.

Job done. In the meantime, the boys pursue their interests outside football. They get their own TV show, Gaz becomes Mayor of Manchester and the Class of 92 brand becomes the biggest in the world. You can buy Class of 92 fragrances, Class of 92 Cola and Class of 92 clothes. You can even visit a Class of 92 theme park just off the East Lancs Road.

The story ends with the Class of 92 riding into Old Trafford on their white steeds and taking over the club, and the revelation that they are not just five ordinary blokes from Manchester but superheroes with secret powers who can perform miracles in times of emergency, like Ryan’s goal against Arsenal in the 1999 FA Cup semi-final. They are the Class of 92 Men.

Hard to believe? Not really. At this rate, it might just happen.