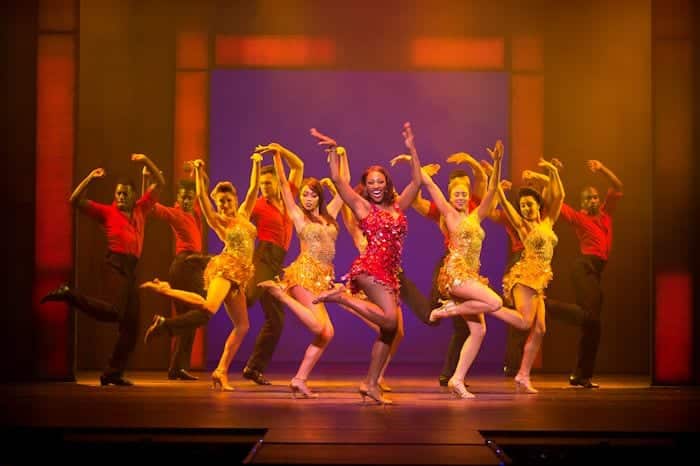 The Bodyguard was one of those hit films which, like Desperately Seeking Susan, Dreamgirls and The Man Who Fell to Earth, was marketed on the back of the star known more for their music than their acting ability.

In 1992, the producers of Mick Jackson’s film struck lucky when leading lady Whitney Houston proved to be a very fine actor. The camera loved her.

In the West End, the role of Rachel Marron, an international singing superstar who has just released her first film has been played some big belters, including Beverley Knight and Alexandra Burke.

Burke returns to the role here, having also toured with the show previously.

The plot follows Kasdan’s screenplay with some additions by Alex Dinelaris. Essentially though, it’s a love story between two people from very different worlds.

Frank Farmer (played by Ben Lewis) is sent to protect diva Marron (Alexandra Burke) as her bodyguard, following death threats from an unknown stalker. As the two begin to spend more time together, the Queen of the Night finds that The Greatest Love of All is right in front of her. Altogether now, ahhhhhhh!

The plot unravels like an old B movie and there are some moments when you find yourself sniggering. The villain of the piece – billed simply as The Stalker (Phil Atkinson, in a thankless role which he does a great deal with) hangs around the stage like a panto villain.

I was tempted to shout “Behind you” because as soon as a lead character rests their eyes, there he is tiptoeing around like a silent movie bad guy, ready to tie the heroine to a railway line, metaphorically speaking, of course.

But because this is big budget hokum, every now and then he stands there bare chested, staring out at the audience trying to look menacing. This is a fantasy stalker, as opposed to gritty realism.

There is the odd montage on a gigantic screen featuring Frank and Rachel and there is The Bodyguard, suited and booted, glancing over at his lover, as her protector.

One scene, a smoke-filled silhouette of Frank carrying Rachel, recreates an iconic scene from the film but resembles a vaping advert for people wanting to kick the cigs.

The problem is that because of the dramatic music and the corny glances he gives her, he resembles a supply teacher filling in until someone better comes along.

So the question is this. Why, when there is more cheese on display here than on top of a Domino’s four cheese pizza with extra cheese, is this show really enjoyable?

There are a few reasons. One of these is the music of the late, great Whitney Houston, including the much imitated I’ll Always Love You (a Dolly Parton song) and the epic quality of Run to You and I Have Nothing. These tracks have narratives worthy of a film’s running time condensed into three minutes and the emotional weight that they carry hits you where it hurts.

Alexandra Burke knows how to sing these songs. Very often you hear them oversung and that reduces them to Stars in Their Eyes cover versions.

But Burke keeps some gas in the tank so that the big finales of each song can have a greater impact.

Battling a pesky cold, she does really well and is a credible actor too. She excels during the concert scenes, which really feel like you are at a gig, without the forced audience participation. You want to clap, you want to sing.

Emmy Willow plays Rachel’s sister, who is overshadowed by her in more ways than one. The actor holds back for the first few songs and as her character feels more confident, she lets rip and has the voice of an angel.

Willow is that strong that if Burke had to step off stage to have a Lemsip, Willow could have stepped in at the last minute and pulled it off.

Karen Bruce’s choreography gives the show a modern feel and Burke shows you why she would have won Strictly if it weren’t for those pesky kids, sorry I mean trolls, on twitter.

The set is lavish and keeps surprising you – a log cabin, a karaoke bar, and Rachel’s massive and grand looking home. No expense has been spared.

The addition of Whitney’s hits One Moment in Time, All The Man That I Need, and Million Dollar Bill is inspired as it means her fans go home feeling that they have heard more than they came for.

The Bodyguard is corny and cheesy. But with Alexandra Burke at the helm, strong production values, Houston’s hits, Emmy Willow’s terrific turn, a great supporting cast who deliver some dynamic dance moves, and a terrific orchestra, with crisp and clear sound design, The Bodyguard leaves you wanting to dance with somebody by the time of the encore and just go with it.

The Palace Theatre until 4th January 2020