Manchester says ‘thank you’ in free festival of fun, thanks and remembrance 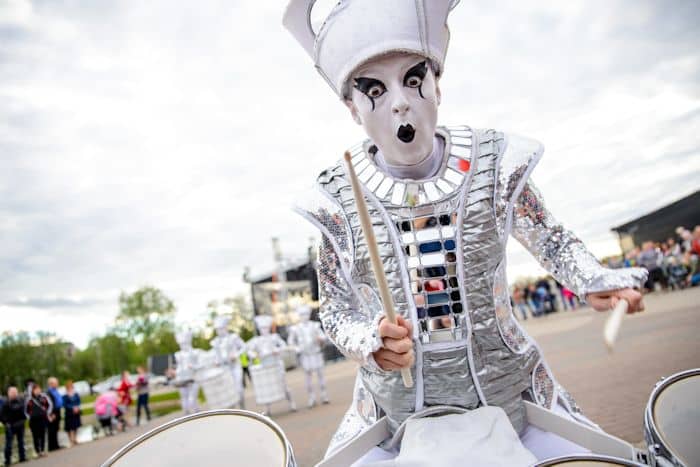 Manchester will be saying a big thank you this weekend (14th and 15th August) to everyone for helping and supporting each other during the pandemic with a festival of free entertainment.

The Thank You Manchester weekender is a free fun-filled festival of thanks designed to bring the laughter back and a smile to all.

There will be something for everyone with street theatre, dancing, toe-tapping live music, and a chance to get involved in creating a very special Manchester thank you with three city-based artists.

The weekend kicks off on Saturday with a big thank you from city bosses to all the amazing people Manchester simply could not have done without over these last 18 months.

Doctors, nurses, shop workers, bus drivers, food bank staff, teachers, mums and dads, and vaccination centre volunteers are amongst those in line for a special mention in the opening event that will pay tribute to everything they have done during this time to help keep us all safe, and to keep us going.

A spectacular weekend full of surprises and fun for all ages is promised, with music, circus performances, and walkabout street theatre, taking over the city streets and squares.

From rainbow stilt walkers and giant flamingos to human-sized pigeons, super-friendly special bees, and enchanting squirrels like you haven’t seen before, all ready to charm and delight, there will be something for everyone.

After a year and a half of lockdowns and the sound of silence across the city’s streets and squares, music lovers are also in for a treat over the weekend with a musical Manchester thank you for anyone who has been missing the sound of live music and performance.

With live music in Cathedral Gardens and Piccadilly Gardens, the city squares will be alive with music and sounds celebrating Manchester’s rich musical heritage. From Bollywood and brass, to samba, soul beats, and everything in-between, as well as cool jazz beats, rhythmic drummers, and a special performance curated by Matt and Phred’s.

Manchester Central Library plays host to a musical extravaganza on Sunday with an invitation to try your hand at playing one of the many instruments from the library’s collection, hear the Northern Chamber Orchestra perform, or catch the amazing Hip Hop archive exhibition, marking over 40 years of Hip Hop lifestyle and culture.

The weekend will also see performances from some of the city’s best loved local community groups, familiar sights all of them at city festivals pre-Covid. Drawn from right across Manchester’s widely diverse community, they will be showcasing everything from belly dancing to soul beats, samba and more.

Exchange Square will be home to a Manchester Market for the weekend, selling iconic Manchester pictures and Manchester themed clothing and accessories, alongside tasty treats from locally based bakeries, and other local produce.

On Sunday there will be a chance to come together to remember those we have lost and to reflect on the last year and a half, when the Reverend Canon Nigel Ashworth, joined by the Lord Mayor of Manchester Tommy Judge, will lead a short community gathering of thanksgiving and remembrance at 12:30 pm on St Ann’s Square.

This will include musical contributions from the St Ann’s church choir and the Greenfield Brass Band, along with communal singing. There will also be a minute’s silence for the city to pause, stand together, and remember and reflect.

And Mancunians are being asked to add their own thank you to an enormous sculpture made up of giant 3D letters that spell out Manchester.

Led by the team behind Art Battle Manchester, with help from event producers Engine No. 4, three local artists will be tasked with putting their own designs on the letters, which will become a huge colourful thank you to the city.

At 1.4 metres high and 14 metres long, it’s hoped that giant-sized thank you will go on display in the city as a reminder of the spirit of the city over the last 18 months, and everyone and everything Mancunians want to say thank you for.

An army of specially recruited volunteers will be on hand during the weekend to support the event – which couldn’t be delivered without them – with more than a hundred responding to the callout for help in just a few days.

The festival will be spread over the whole weekend with performances on Saturday repeated on Sunday, to give as many people as possible the chance to come into town, enjoy the atmosphere, and have fun safely.

To find out more about the weekend go to welcomebackmanchester.com/thankyou