Heading to Take That at Manchester Arena? Here’s a sneak preview of what to expect and it looks INCREDIBLE 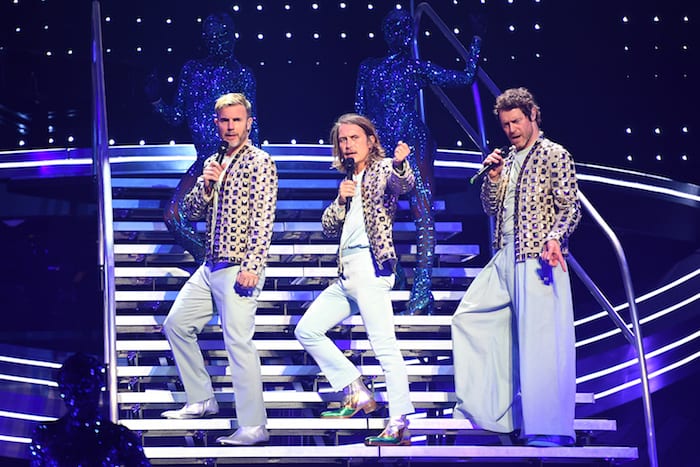 Manband Take That return to home turf in Manchester next week for their huge new Greatest Hits tour – and it’s looking like quite the stage spectacular.

Fans who have seen the band perform live before know the lads always put on an incredible show. And in the first images released from the new tour which started in Sheffield last week, you can see that the current line-up of Howard Donald, Gary Barlow and Mark Owen have pulled out all the stops.

Incredible stage sets, flamboyant outfits and at one stage the Take That lads even mount motorcycles to rev up the crowds.

Naturally, as this is the Greatest Hits tour, fans can expect all the band’s biggest hits on the setlist.  The show will open with Greatest Day, and will include fan favourites like A Million Love Songs, Sure, Never Forget, Rule the World, and even Babe.

The tour celebrates the 30th anniversary of the band first forming right here in Manchester.

There is also superstar support for the lads, when music icon Lulu heads on stage at the finale to reprise her big moment on the band’s chart-topping hit Relight My Fire.

But if you haven’t managed to bag a ticket for the live tour, which is also heading to venues in Birmingham, London, Cardiff and Glasgow, there’s still the prospect of seeing it all live on the final night of the tour on June 8th at cinemas across the UK.

It’s definitely worth getting down early for the shows, as chart-topping singer Rick Astley is the support act for the tour.

Stage times for Manchester Arena have not yet been confirmed, but these are the expected times based on the Sheffield concerts.

While many of the concerts on the Take That tour have now sold out, there is still some availability for the Manchester Arena shows on Monday April 22nd and Tuesday April 23rd.  For up to date information, check Take That’s website here.