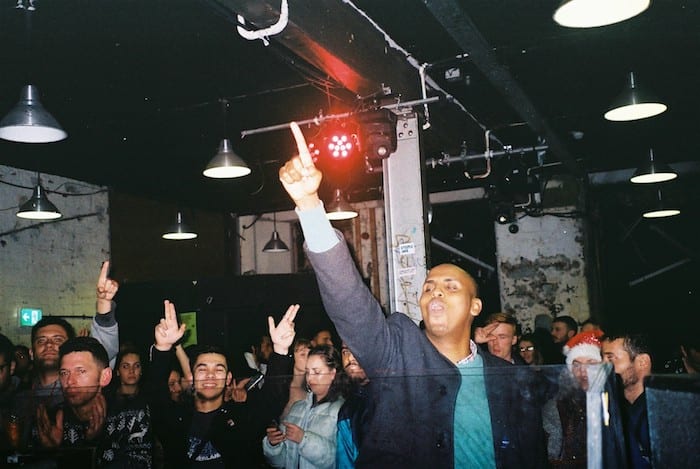 Dancehall, afro bashment, UK funky, old school garage, soca, bassline, funk, soul, and R&B – these are just some of the genres you might expect to hear played out at a Swing Ting dance.

The experimental club night and record label has never been afraid to pluck artists from a multitude of scenes – and as a result, has long been a melting pot for different talents in the city to come together.

An integral part of the fabric of Manchester’s underground music scene, it was first founded in 2008 and, like many a good Manchester club night, began first as a radio show and series of student house parties before graduating into ‘proper’ events.

Now this week, after eleven years spent running parties and producing tracks under the Swing Ting moniker, founders Ruben Platt and Balraj Samrai are on the cusp of releasing an album that is as much a love letter to Manchester’s varied and eclectic music scene as it is to the dances themselves.

Called 100 Dances, if we didn’t know any better we might say that the new ten-track LP, which is “dedicated to the staff, security and everybody who came to dance,” feels like it could be their last dance.

It’s certainly an homage to everything that’s been achieved up to now – including over a decade spent passionately channelling soundsystem navigation.

The album carries with it an indubitable sense of nostalgia, with certain tracks echoing different eras of the events and nodding to Platt and Samrai’s various fascinations over the years with dancehall and bashment, UK funky and garage.

We’re told a lot of this, to a degree anyway, is intentional. Balraj tells us how he feels that tunes like Signs and Feel It hark back to the days of 2012-14 when they had bookings like Zed Bias and DJ Q and would play a lot of what he calls “almost like soulful garage.”

Others, like a feature with MC Trigga, marry contemporary and old school sounds together: combining the junglist and grime MC’s classic grimey ragga vocals with what Balraj describes as “some of the drill kind of like production that’s around at the moment.”

“For us, Trigga for us feels a bit like somebody who is a bit timeless,” he elaborates. “He’s worked with like Giggs and Wiley and Skepta and all these people like JME and people but he’s still very humble and [we] work really well together.”

But as well as encapsulating bygone eras, the new album also carries with it the feeling of progressing through an actual club night.

Soulful opener 99 Dances starts with a snippet of resident MC Fox recorded live at the club night and warm brass, which Balraj describes as “almost preparing you to start to go into it, into the event.”

Whilst the final tune, Give Thanks (feat. Shanique Marie), feels like an end of the night selection.

“There’s a few tracks that are a bit more almost like soul R&Bish kind of vibe which for us feels a bit like lights up kind of vibes or early in the night,” he continues.

“So yeah strangely I feel like some of it feels like stuff you could play during different parts of a club night and then other parts it probably feels like different eras of the dance.”

Over the years, the club night itself has had many incarnations,  moving from a tiny place on Oxford Road called Scubar (now apparently a church) to a night at The Attic and then a karaoke bar called Charlie’s, before settling down in the Soup Kitchen basement.

Those years spent at Charlie’s were particularly formative, with 2010/11 seeing Samrai and Platt make a return to creating their own music after taking a break to just DJ, get involved in the city and go to events.

“I guess [we] kind of [wanted to] absorb and hear music a little bit more before you know going back to the productions,” he tells us.

“By then I think we had a bit of an idea of what we wanted to make music-wise and it was stuff that you could play out and that would sound quite good maybe, so yeah we were able to test out some music here and there and I guess like in soundcheck and make sure it sounded ok like with the mixdowns and things like that.”

It also saw them expand their reach and gain wider recognition across the city’s scene. In 2011, they booked a guy called Seiji who’d been part of Broken Beat Scene to play Charlie’s and that brought a whole new crowd down to the events.

“He had a bit of a following with a slightly older crowd as well as a newer crowd, cause he was like crossing over different spans of scenes and things like that,” says Balraj.

“I remember even seeing people like from the Electric Chair, [Luke] Unabomber like him coming down with some people of that kind of era too sort of getting to know about what we were doing.”

Inspired by other events they were going to – like Hotmilk, where they’d meet Swing Ting resident and label director Joey B, or Hoya Hoya and Eyes Down, which Jon K (who Balraj worked with at Fat City Records) was involved in – the pair were making loads of connections in the city and starting to push the envelope in terms of what they wanted Swing Ting to be.

“That sort of time was where we like started to incubate more a proper thing really,” he continues.

“We booked quite a mix of different DJs from around the city across different scenes […] we weren’t just trying to appeal to just like a garage or grime crowd or just a hip-hop crowd whatever it might be, we were trying to kind of mix it up a little bit I guess.”

This was during a period when the going out music scene was, as he puts it, “quite separate.” You’d either be going to say Mint Lounge or The Music Box to hear a set selection of DJ’s play, or to a bassline rave in the Printworks or an R&B night.

There wasn’t much crossover back then – so they created it, booking people like Konny Kon from COZ to DJ alongside Jon K and Angie Steppah for their Charlie’s events.

“It was kind of this weird post-dubstep time where there was this, there was other music going on that was getting a bit more like techy, like techno-y, but then there was also kind of some quite funky rhythms which we quite liked I think because we wanted it to be sort of a dance still really.”

It was around this time they moved into the Soup Kitchen basement, having been approached by one of the owners, Sam, who’d been coming along to a few of their parties at Charlie’s.

So began a new monthly residency that ended up running right from 2011 to 2019 – with “barely with a month off, to be honest.”

In 2012 they began to amass extra residents and singjaying MC Fox started hosting regularly (“We were booking him anyway to do it,” says Balraj, “but he regularly kind of got involved and became a proper resident, barely missed one over that period.”)

Joey B came on board with his seemingly endless collection of dubplates, alongside Murlo/Sharda – who brought with him an array of silky bashment, UK funky and soca productions that went down so well he eventually ended up relocating from London to Manchester.

Starting their label seemed like the next natural progression. Its first release Skank came organically – “It was a track we’d been playing anyway and we sort of helped to link it up because we first introduced Fox and Brackles together through playing the events,” says Balraj. 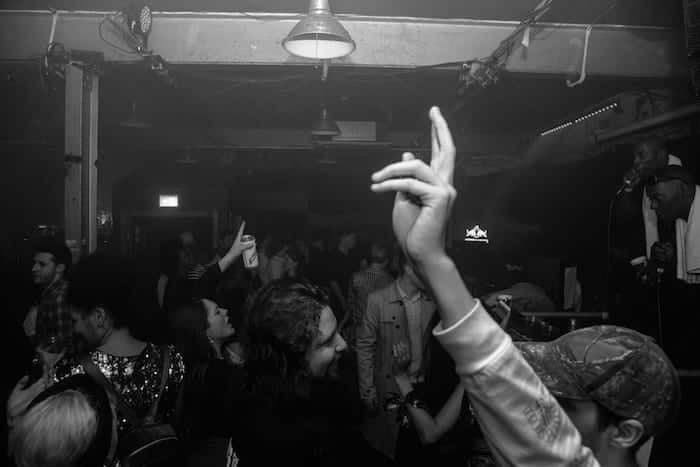 Using it as a platform to release fresh music from the Swing Ting family as well as from friends, peers and like-minded producers, the releases started flowing and they gained the attention of Manchester icon Zed Bias, who approached them in 2015 with his Madd Again project.

From here, Swing Ting started to build up an international profile with a slew of global releases and shows. Profiled by Resident Advisor and awarded FACT magazine’s label of the year in 2016, the rest – as they say – is history.

Soup Kitchen’s Northern Quarter basement is still the club night’s home, although dances are a bit less regular than they used to be. Nowadays, they’re more focused on the production side of things for the label.

But they will be throwing a series of parties this month to launch the new album, which features a host of local collaborators like HMD, Eva Bee and [K S R] as well as some from further afield.

The London date is set for this Friday 15th March to coincide with the album’s release. They’ll also be taking the show on the road, heading to Bristol and Dublin as well as throwing a party here in Manchester on Saturday 21st.

We honestly can’t think of anywhere better to celebrate the sounds that have shaped over a decade of underground clubbing in Manchester. Just don’t wear your nice trainers.