Before YO! Sushi opened up their doors in 1997, getting an authentic Japanese sushi bar experience was nearly impossible unless you were willing to fly all the way to Japan. Introducing Britain to the distinctive yet delicious flavours of sushi, katsu, soups, ramen and tempura, YO! Sushi now has 92 outlets and is the go-to place for a Japanese food fix.

One thing I’ve always liked about YO! Sushi’s layout is the fact that even if you’re dining on your own, you still feel a part of something when sat up on the kaiten train bar. In fact when I went, the majority of people having their lunch there were lone office workers on their lunch break or shoppers who needed to refuel. It’s a place that feels welcoming, bright and alive, not only in the décor and staff but also the food.

I sampled eight out of the 20 new dishes, ranging from hot plates and sushi rolls to an oriental style dessert. YO! Sushi’s food is at its heart inspired by the street food of Tokyo and these new dishes seek to portray the gastronomical variety and fusion of tastes found there.

The new paper menu, designed to look like a one-use newspaper and including various articles about contemporary Japanese culture, reflects these city roots. With Japanese native chefs in the open kitchen and a menu that is made fresh daily, this street-food vibe is certainly upheld through the broad range of dishes.

Spoilt for choice by the new range, I started off by trying some of the cold options. With some refreshing new takes on the traditional sushi roll, the first dish of Fish No Chip Roll was also a spin on a British favourite. The roll consisted of tempura sea bass with onion, cucumber and a wasabi sauce coated in citrus yuzi furitake, a spicy Japanese seasoning with hints of zingy mandarin. It’s coated in a mayonnaise-like sauce to counteract the spice, making it a real treat for the taste buds and a healthy alternative to fish and chips at just 139 calories per plate. 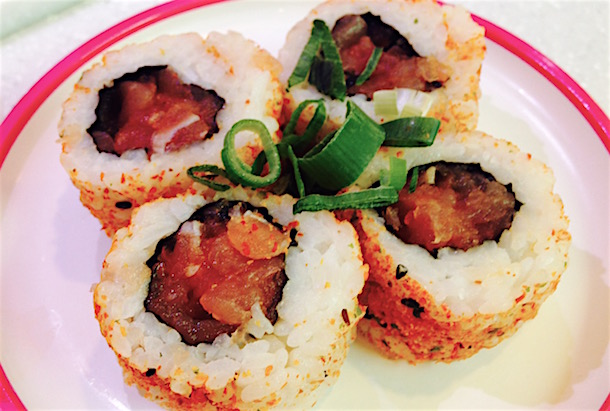 Unable to resist the thought of crispy duck, spring onion and hoisin sauce in sushi form, I next tried the Hoisin Duck Roll and it didn’t disappoint. Perhaps veering slightly away from the Tokyo vibe, it tastes just like the Chinese favourite although with a slight seafood taste from the nori.

The next cold dish I sampled was another fiery option – Spicy Tuna Roll. Filled with yellowfin tuna and a chilli-based sauce, it’s not for the faint hearted and was a truly memorable explosion of strong flavours.

The silent hero of my meal had to be the Okonomiyaki ( or ‘As-You-Like-It’) pancake. Filled with cabbage and topped with smoked bonito tuna flakes and a Japanese sauce, this dish was like an oriental version of bubble and squeak and incredibly moreish. With some nice subtle flavours and a great combination of textures, it’s a healthy and tasty option.

The Maguro Katsu, a tuna version of the ever-popular chicken katsu, is also worth a try. A crispy outer shell gives way to the soft tuna, onion and mayo interior and the very mild wasabi dipping sauce gives it a bit of extra bite.

The Teba No Karaage chicken wings were tasty but nothing special and the Clam and Enoki Miso soup was nicely seasoned with a bit of spice – a nice light option for a starter.

Too full from my selection of main courses, I took my Matcha Roll home to eat as a mid-afternoon snack. For those who aren’t a fan of green tea, this dessert’s light sponge is only very subtly flavoured with Matcha and is filled with a generous helping of fresh cream. The odd crunch of azuki beans adds texture to the cake and it’s drizzled with white chocolate for some sweetness.

Carrying on with the Japanese preference for cream filled cakes, the other new dessert on the menu is a tempting baked Soufflé Cheesecake which I look forward to trying in the future.

Whether you go for the quirky combinations, intense flavours, healthy ingredients or distinct freshness of the food, the new Tokyo-inspired menu at YO! Sushi is definitely worth a taste. 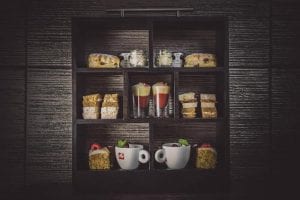 Afternoon tea for 2 is just £25 at Rosylee and it’s amazing! 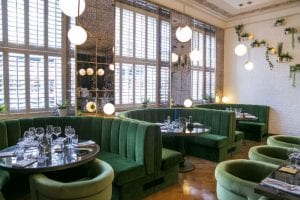 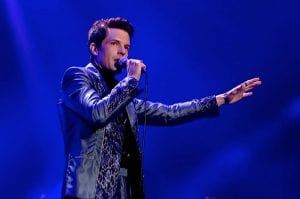