Just before Christmas, chef Aiden Byrne came back to Tower 12 for his new venture, restaurant MCR. And though the restaurant isn’t called Manchester House anymore, the tasting menus include several of the dishes the chef is best known for.

Now, the restaurant has just received its first visit from the national press. Kathryn Flett, reviewing for the Sunday Telegraph, took her teenage son with her to try Aiden’s nine-course tasting menu. 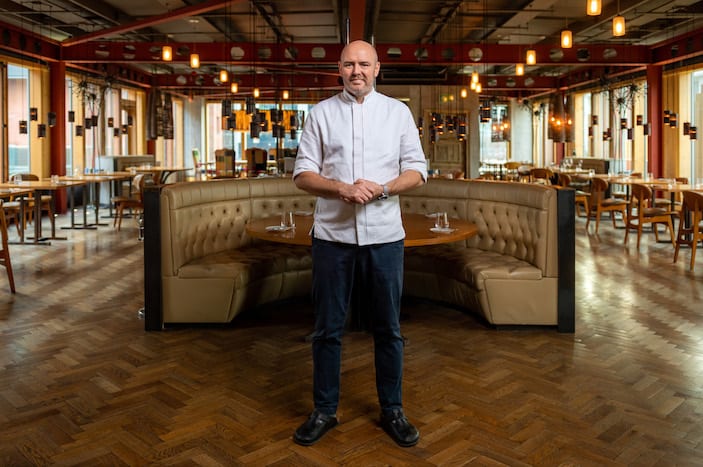 On first impressions, writes Kathryn, “MCR ticked all the contemporary urbane posh-dining boxes: entrance is via an anonymous door in the base of an office building, there’s a lift, you have to be escorted to your table far away in a cleverly reimagined airy-glassy giant office space with a warehousey vibe – open kitchen, inevitably – which manages to be funky and elegant, cool and classy and yet sufficiently in-your-face to be properly Mancunian, too.”

So far, so good. But what about the food?

“Back in the 2002-day when aged just 22, the whippersnapper Byrne became the youngest chef to acquire a Michelin star in a British restaurant,” writes Kathryn.

Aiden then swiftly became head chef at the Dorchester Grill and at Tom Aikens, before launching Manchester House in 2013.

“That Byrne can cook is not in question,” writes Kathryn.

“That he can cook for tired-old-me and a nearly 17-year-old whose love of jalapeño chillies means everything he eats is soused in Flying Goose sriracha sauce is, conceivably, moot.”

Katheryn’s teenage son is impressed by several of the dishes (pig’s head croquette with smoked apple purée: “God, that’s amazing!”) but less so with others (salt-aged duck, girolle mushroom, hazelnut and borlotti beans: “OK, so that looks nice – but what’s with all the mushrooms?”).

He describes Aiden’s Ribblesdale goats’ cheese flan, Lomo ham and onion as “awesome!”, while braised short rib of beef, eryngii, secretto and tartar is “totally delicious” (although he has “no idea what any of this is”).

The teenager’s verdict: “This is totally not my kind of food, you know that, but I’m also so glad I had it.”

But the surprise winner amongst the procession of dishes was Aiden’s bread served with chicken butter: “Omigod, I have literally never had better butter than chicken butter,” says Kathryn’s son.

And Kathryn describes the service during her meal as “great: warm and cool, explainy without being infuriating.”

So did she enjoy the restaurant MCR experience?

“I always have fun in Manchester, but it’s fair to say that my exhausted palate didn’t so much sing as sigh,” she concludes about the nine-course menu.

The Sunday Telegraph awarded restaurant MCR four stars out of a possible five.