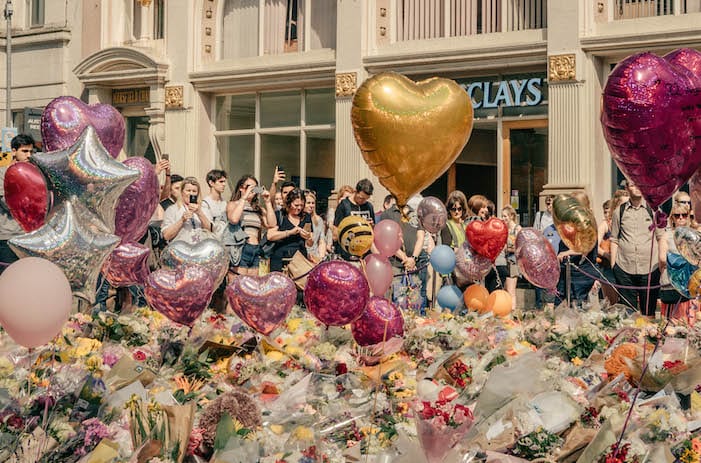 Images of the tributes honouring the victims of the Manchester Arena terror attack moved people to tears, not just in Manchester, but around the globe. The sea of flowers, balloons, toys and messages filled St Ann’s Square, which became a place of pilgrimage for tens of thousands of people who wished to pay their respects and express their sympathy to the dead and injured.

The unprecedented scene in the quiet of the square illustrated a mood of love and togetherness in the wake of the city’s most traumatic time since the Second World War.

Now they are gone, but the town hall’s handling of the removal of such a symbol of Manchester’s shared grief and spirit of solidarity in the face of evil, conducted with dignity after consultation with grieving families, has commanded widespread respect.

The timing for taking away the tributes – 19 days after the atrocity at the end of  Ariana Grande’s long awaited concert – was absolutely right and has enabled many of the flowers, messages and soft toys to be rescued for reuse before the affects of time and bad weather rendered them beyond saving.

Twenty-two children carrying 22 balloons – one for each of the Arena victims – will lead the Manchester Day parade through the city in an act of remembrance watched by up to 100,000 people.

Flowers retrieved from St Ann’s Square in good enough condition are being pressed and preserved by staff in the City Art Gallery’s conservation studio. Some will be included in memorial books for the families of the victims. Potted plants left in the square as tributes are being replanted in tubs all over the city, nourished by compost produced from the remaining floral tributes that it was not possible to preserve.

Scores of teddy bears, other soft toys and football shirts, left as tributes to mark the targeting of young children in the terror attack, are in the process of being dried, cleaned and restored for distribution to children’s charities around the city.

Hundreds of written messages of love, hope, sympathy and solidarity, read in silence by the square’s thousands of visitors in the aftermath of the bombing, are being preserved by staff in the archive section of Manchester Central Library before being given a permanent home for posterity in the Manchester Museum.

Councillor Sue Murphy, Deputy Leader of Manchester City Council, said: “St Ann’s Square has been a remarkable sight and a moving temporary memorial which we have maintained as long as we practically could. People should be reassured that neither those who lost their lives or were hurt on 22 May nor the remarkable resilience and refusal to give into hate which Manchester demonstrated will ever be forgotten. That spirit and those memories will live on forever.”

Meanwhile the council is continuing to weigh the options for a permanent memorial to the bomb victims. One possible location could be the proposed sculpture park on the bank of the River Irwell close to Manchester Cathedral, Chetham’s and Victoria Station’s entrance to the Arena where the attack took place.