Snow White and the Seven Dwarfs review: the jokes just keep on coming in this hilarious version of the classic panto 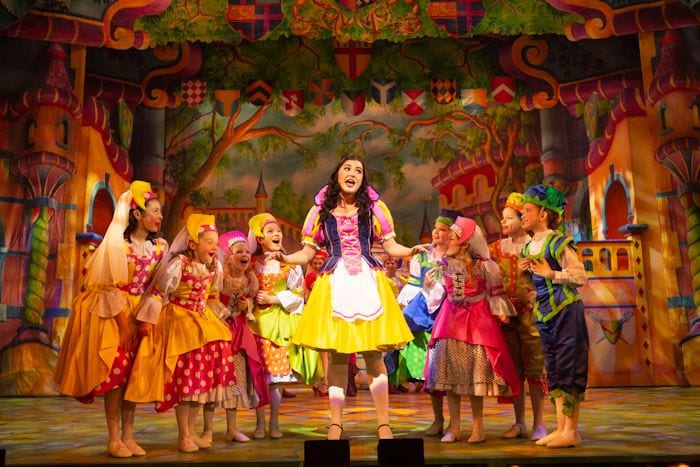 It’s that time of year when everyone gets the chance to boo and hiss the villains when they come to town.

It’s also pantomime season. For many little ones, it may be their first time seeing a show on stage. Oh yes, it is!

At the Opera House this year it’s Snow White and the Seven Dwarfs, and the face on all the posters is Strictly judge Craig Revel Horwood as the Wicked Queen. He is joined by panto regulars and scene stealers Ben Nickless (Muddles) and Eric Potts (Dame Nora Crumble), Joshua St Clair as Prince Harry (no, not that one), who has just finished touring in the hit musical, Kinky Boots), and Zoe George, who has appeared in Wicked, as Snow White.

Having seen quite a few American stars unwittingly sign up to a panto and seem quite confused by what is going on, it’s brilliant to see a terrific team who embrace the tradition of variety, complete with the many double entendres and word plays which make up Alan McHugh’s ferociously funny book.

The plot is always loosely based on the original fairy tale in order to play up the comedy, incorporate plenty of contemporary and local references and give the supporting characters lots more to do because they are the glue keeping the piece together.

The familiar narrative development of Snow White dreaming that once day her prince will come is not really shaken up, and you cannot help but think this is an opportunity missed. She doesn’t have to turn into Katniss from The Hunger Games, but she should have more to do than look wistful.  Zoe George does well though, particularly when she is singing some of the upbeat pop numbers.

Joshua St Clair has recently appeared in both Kinky Boots and School of Rock and you can tell. Ashley Nottingham’s choreography is incredibly athletic, and St Clair delivers this with real effortless style and swagger. He has great vocals too.

The Seven Dwarfs are given a twist – they are Mancs and have some good scenes, but these are too short (sorry!) to have much of an impact, and you end up wanting more from them.

But Craig Revel Horwood is front and centre and he surprises you in many ways. He is in great voice and belts out songs like One Way or Another with genuine power. He is also great at improvising when things go wrong.

But he is not quite as dastardly or wicked as you would want him to be. I imagine he will become viler as the run goes on because as a TV dance judge he has far more bite.

The ensemble and students from the Stalder Academy of Dance in Sale do far more than perform in the background. They are the backbone of a show like this and acquit themselves very well.

Eric Potts is a real pro and knows the panto inside out. He reminds you of Les Dawson and some of the great dames because he enjoys the ridiculousness of what is happening. He  delivers his gags like a tray of Greggs steak bakes at lunchtime, and you eat up every single morsel with relish.

Following his brilliant turn here last year, Ben Nickless dials it up and now has his own following. His impressions of people like James Arthur and Gary Barlow are so spot on that you can hear belly laughs all around you. Everything this performer does is comedy gold and he never simply phones it in. He could make a Lord Sugar joke seem hilarious. Like Kylie Minogue’s greatest hits, they just keep on coming.

Guy Unsworth keeps the momentum going with a dazzling dragon flying over the audience, plenty of songs, adult humour and slapstick. And, of course, there’s a moment when kids are invited up on stage to join in with a sing-along.

This panto offers you the chance to unwind and put the year behind you. And like the annual staple Christmas film starring Steve McQueen, Snow White offers you a great escape.

Snow White and the Seven Dwarfs is at the Opera House until 29th December.