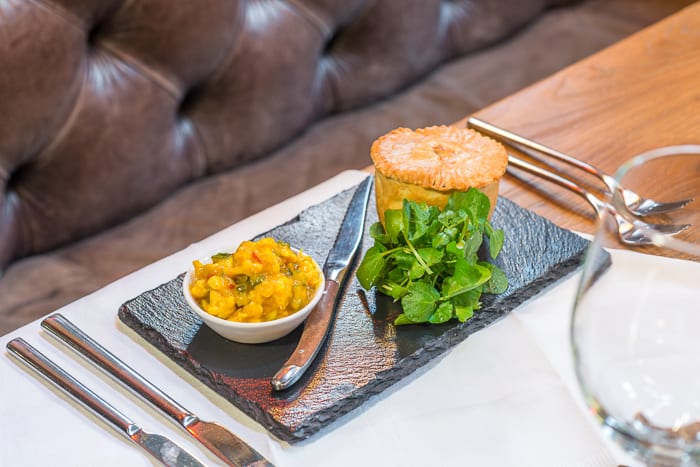 Lee Ferguson has been a very busy boy. The executive chef for Manchester’s three Victorian Chophouses – Albert Square, Mr Thomas’s and Sam’s – has perfected no less than ten new menus to greet the spring.

He may be a bluff Yorkshireman, but Lee knows how to feed Mancunians. One of his first missions since arriving as head chef in September – he was made executive chef just before Christmas – was to redefine the chop houses’ famous “Manchester Plate” of snacks for sharing. He didn’t think the original was Mancunian enough.

The new menus – featuring bar snacks, fixed-price lunch specials and spring/summer à la carte – were unveiled at a preview tasting at the Albert Square Chop House and demonstrated Lee’s passion for traditional northern delicacies, robust flavours and the best ingredients, some of which have been all but forgotten in recent times. Most of the dishes will be available in all three restaurants.

His bar snack menu – he resisted the temptation to call them Manchester tapas – perhaps best sums up where Lee is coming from. “It’s all about nibbling on snacks while enjoying a pint,” he says. But the tasting revealed that there’s much more than a nibbles worth of creativity gone into them.

The Manchester Egg substitutes black pudding for the sausage meat casing round a perfectly runny yolk and comes, naturally, with brown sauce.

The joy of these snacks is that none is priced at more than a fiver.

Highlights of the fixed-priced lunch menu – £16 for two courses; £19 for three – include a starter of delicately flavoured curried lamb sweetbreads partnered with hearty lentil dahl and an inventive vegetarian main course of broccoli and Stilton “speltotto”, a named coined by the River Café’s Hugh-Fearnley-Whittingstall to describe a risotto made from British grain spelt instead of rice. Puréed broccoli produces an attractive green colour while the melted Stilton adds a sharp cheesy punch.

From bacon and haddock chowder to Mr Lowry’s rice pudding, the new spring/summer a la carte is a mighty celebration of British gastronomy.

The tasting showcased starters including crab on toast, Stilton croquette and, as yet only on the menu at Mr Thomas’s, crispy pigs head.

Cauliflower fritters – Lee’s “mega beer snack” – are deep fried in a batter made from gluten-free flour for extra crispiness (who knew?) and partnered with home-made curry mayo.

The Stilton croquette features that most English of cheeses sourced from the family-run Cropwell Bishop creamery adding serious bite to a potato croquette served with sliced beetroots and pickled walnuts.

The crispy pig’s head, a real labour of love, is made by rendering a brined and boiled pig’s head, rolled and set into brawn then deep fried and partnered with English mustard mayo, sharp Granny Smith’s apple and a pickled quail egg.

Rump of lamb is a tour de force, the meat roasted and rested to a blushing pink paired with wilted lettuce, peas and beans, while chicken on toast – there’s a lot of toast on the menu – is a real showstopper. Lee takes half a corn-fed Goosnargh chicken, confits the leg, steams the breast to keep it moist, loads it on a slice of sourdough dressed with mustard and pan-fried in the cooking juices and serves it with peppery watercress and a jug of creamy chicken gravy.

The specials board is back too. This is where you’ll find the fish dishes which will vary according to what’s best on the day.

For the tasting it yielded a whole brill – designed for two –  one of the very best of flatfish, which came smothered in tangy brown shrimps and samphire and accompanied by tenderstem broccoli and new potatoes with hollandaise.

Pork tomahawk, the meat special, was almost as spectacular –  a monster trimmed pork chop cooked with sage and garlic and served with roast gem lettuce.

The showcased pudding was an enduring favourite – a to-die-for rhubarb trifle made from forced Yorkshire rhubarb, lifted by the sweet spicy stab of stem ginger, set in ginger beer jelly and topped with double cream.