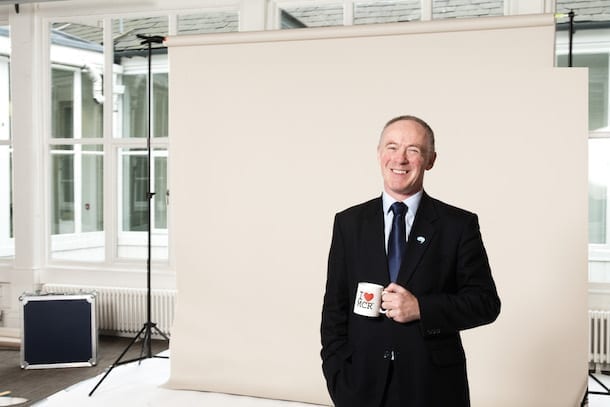 Sir Richard Leese succeeded Graham Stringer as leader of Manchester city council following the local elections of 1996 and has been at the helm during two of the most tumultuous decades in the city’s history.

“…the bomb was not the making of modern Manchester.

“…it was a disaster that we recovered from pretty well.”

His was literally a baptism of fire. Less than six weeks after he was elected leader by his fellow councillors, the biggest bomb ever detonated on the British mainland in peacetime ripped through the heart of Manchester’s commercial centre. The devastating attack by the Provisional IRA left more than 200 people wounded and much of the city centre in ruins. The damage was estimated at more than £500m.

Sir Richard had been at a Labour Party meeting in the town hall that morning. Seconds after a fellow councillor asked what could be done to raise the new leader’s profile, the building shook as the bomb detonated.

“The bomb was the most traumatic thing to have happened in this city since I have lived here,” he said. “There is nobody who was directly or indirectly involved that still in part doesn’t live that trauma…there’s an emotional impact that will stay with me until I die.”

Despite that trauma, Sir Richard believes that the successful delivery of the Commonwealth Games in 2002, in which he was deeply involved, probably had more impact on the growth of the city in the long term than the bomb.

“I have argued consistently that the bomb was not the making of modern Manchester. It was a disaster that we recovered from pretty well.”

The Commonwealth Games – at the time the biggest multi-sports event that the UK had ever hosted – saw the building of the City of Manchester stadium into which Manchester City moved the following year. It is hard to imagine that Sheik Mansour of Abu Dhabi would have bought the club – and sparked the massive development of the Etihad Campus – had it still been based at its old Maine Road ground.

Sir Richard played a key role in securing the expansion of the Metrolink system and has led the city through the longest and deepest economic recession since the 1930s.

More recently, he has been an enthusiastic supporter, alongside Chancellor of the Exchequer George Osborne, of the so-called Northern Powerhouse project, passionately advocating the construction of the HS2 rail link to London, the electrification of the trans-Pennine rail route, and seeing Greater Manchester take on pioneering new devolved powers over the local administration of its £6bn health and social care system.

Born and raised in Mansfield, Sir Richard took up teaching after graduating from the University of Warwick and worked in schools in Coventry and Duluth, Minnesota, before arriving in Manchester and becoming a youth worker.

He was elected to the council in May 1984 – the year that the left-wing faction, led by Graham Stringer, finally took a majority in the controlling Labour group and formed a controversial and uncompromising anti-Thatcher administration with a radical equality agenda, years ahead of its time.

Their belief that a group of like-minded socialist town halls could take on and bring down Margaret Thatcher’s government was soon shattered. By 1987 Manchester was facing huge debts and the crushing Labour defeat in the general election that year snuffed out all forlorn hopes of a bail-out.

Graham Stringer, aided by Sir Richard and most of the erstwhile hard-left group, shied away from emulating Liverpool’s rebellion and executed an astonishing political U-turn.

Manchester Labour’s new and enthusiastic embrace of the private sector was the start of a new era which saw the remarkable regeneration of Hulme – dubbed the worst slum in Europe – the beginning of Metrolink, and the bid for the Olympics of 1996 and 2000 which delivered the Manchester Arena and that “gold medal factory”, the Velodrome.

As chair of the city’s finance committee and deputy council leader from 1990, Sir Richard was deeply involved in the city’s leap forward in the 1990s and was Graham Stringer’s natural successor in 1996.

On his watch, the long-term decline in the city’s population has not only been reversed but risen by a fifth. Today the average Mancunian’s age is just 29 and in the last four years the city’s economy has grown by 4.6 per cent – even faster than London.

He was awarded a CBE in 2001, and in 2006, ten years after the bomb, he was knighted in the Queen’s Birthday Honours’ List for services to local government.

Yet despite the honours and the achievements, Sir Richard has ruled himself out of contention for the new post of elected mayor for Greater Manchester, which will be contested in 2017.

” Throughout my political career I have always looked for progress, both for the city but also personally,” he says. “For me it is always about what’s new, about challenges. Given the experiences of the last few years, in many ways I see the mayoralty as a step backwards, a step down even, although after two demanding, difficult but exciting decades as leader of the council I would struggle to think of another political position that wouldn’t be a step down.

“I would also resent the amount of time seeking to be a candidate would take. There’s too much to do – the referendum in June, a devolution agreement to implement, investment for the north of England to be secured, a city to run.”