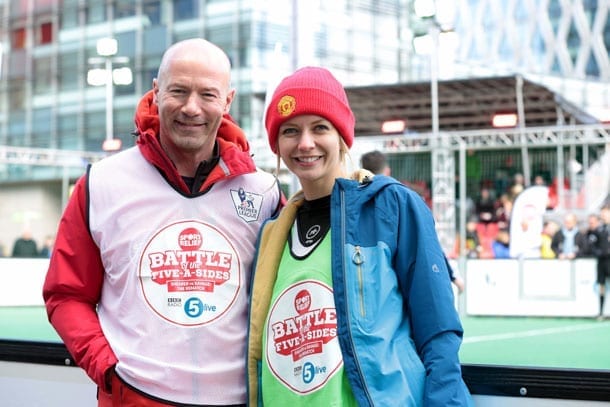 The final whistle was blown yesterday evening at MediaCity with Alan Shearer winning the epic BBC 5 Live Battle of the Five-A-Sides for Sport Relief, supported by the Premier League.

Over 1,100 players took part in 30 minute games as part of Team Shearer or Team Savage to play the equivalent of an entire Premier League season.

Television presenter, Rachel Riley said: “It was such a pleasure to be involved in this epic football challenge, especially as it was right across the river from Old Trafford! I wasn’t sure at one point that I’d be able to carry on for the full 12 hours but the support from the public has been amazing and helped get me through to the end!”

Other well-known names from the world of sport and entertainment taking part were John Bishop, Angus Deayton, Hugh Dennis, and Fatman Scoop, who was sent off with a red card by honorary referee, United’s Adnan Januzaj. 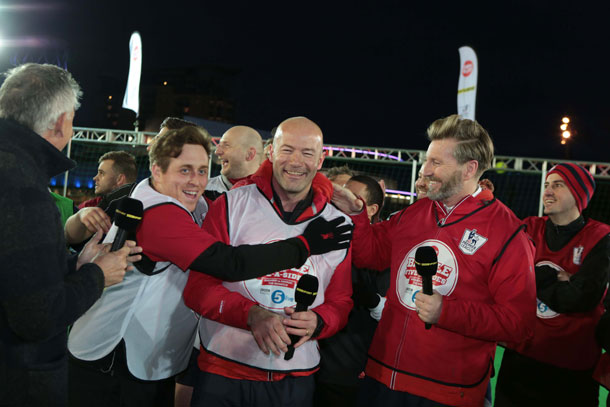 The goal of the game was to raise much-needed cash for Sport Relief. As part of its ongoing support for Sport Relief, the Premier League is turning every £1 raised by the public during the event into £5 and have donated £50,000 on behalf of both teams.

As part of its bigger commitment to funding football facilities throughout the UK, the Premier League also funded the cost of the pitch, which was based outside BBC North’s headquarters at MediaCity.

The money raised will help make a difference to people living incredibly tough lives, both here at home in the UK and across the world’s poorest communities.

The total raised so far stands at over £370,592 and is still rising. You can donate to Sport Relief by visiting sportrelief.com/fiveaside and if you’ve been inspired by the challenge and want to get involved in Sport Relief yourself, head to www.sportrelief.com where you can sign up to the Sainsbury’s Sport Relief Games and run, walk, swim or cycle yourself proud.