See it if you dare: The Haunting of Blaine Manor at The Kings Arms, Salford 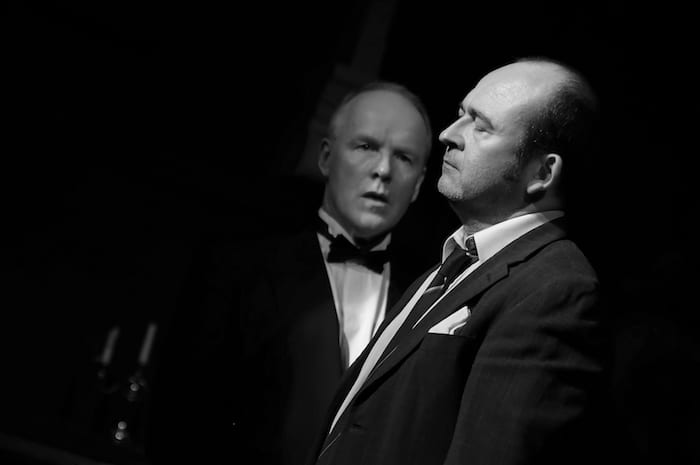 It’s rare for me to feel intrigued within minutes of the start of a play. But this was exactly how I felt as I sat in the front row and stared up at a man towering in period dress, tweed thick and tinged with the chill of age, his angular face bathed in a cool light and icy jewels on his fingers.

His name is Cairo, a legendary medium, just one of the many characters we get up close and personal with as we get to the heart of The Haunting of Blaine Manor.

Written and skilfully directed by Joe O’Byrne, this is a ghost story with a cinematic quality. The intimate upstairs theatre at the Kings Arms becomes Blaine Manor, the stage dressed with flickering candles, glass vials and warped wooden furniture to distort our perception of reality.

The date is 1953 and an investigation is underway. Cairo is joined by Vivian, a bold investigative journalist, and Scarabus, another famous medium. They are driven by the thrill of the chase in a way which is reminiscent of an old American thriller. But are they chasing the ghosts of Blaine Manor or something bigger?

A seance is scheduled to identify the ghosts. Also in attendance is Dr Roy Earle, a paranormal investigator determined to disprove all things supernatural. 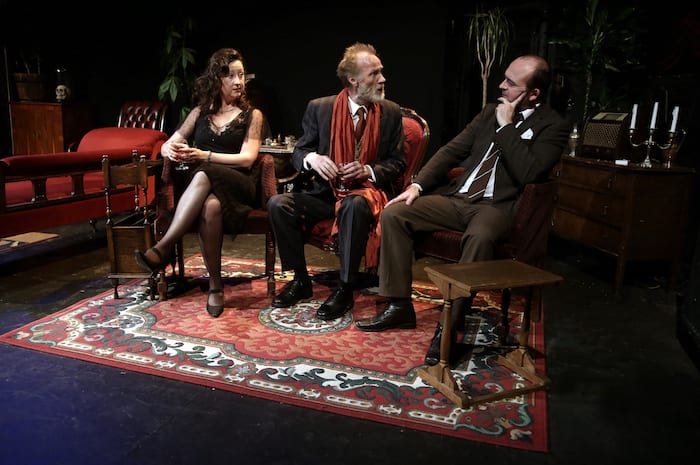 “That’s baloney!” he declares at one point, his tired eyes and American drawl creating a character we can’t help but feel a little affection for. Perhaps he represents the sceptic in us all, the ingrained disbelief we are taught to embrace.

The story unfolds and new clues are introduced at regular intervals. It is well choreographed by O’Byrne, with the mood of unease enhanced by visual effects from Darren McGinn and a growing storm engineered  by sound technician Justin Weatherill. Dr Earle opens up the alcohol and the rest of his demons are released.

The play is set in 1953 but increasingly we realise how the setting keeps characters locked in the past. Vincent the icy custodian of the manor appears, informing the party that the intended seance for the evening has been cancelled due to the death of the owner of the house.

At this point I perceived so much to be already dead: the creepy Butler, Grady (himself a ghost given gravitas by O’Byrne), the deceased wife of Dr Earle who we hear but never see, and then Dr Earle himself, dead behind the eyes as he pours out another drink. He even says he’ll still stay the night in the awful old manor. It makes us ask, is this man haunted or is he haunting himself? Not even a flirtatious Vivian, played with gusto by Jo Haydock, can draw the truth out of him. No, it’s going to be a much more painful process.

Despite the mood of death, the party remain to face the supernatural and their fears. This creates the same sense of intrigue I felt at the opening though what could be more clearly conveyed is why none of the characters choose to leave whilst they have the chance. However, the storyline does generally hold strong, littered with false clues and red herrings whilst we follow the direction of discovery and Dr Earle’s descent.

This is a story of twists and turns from following the visions of the shuffling Scarabus, to the deviously dark humour of Daniel Thackeray’s Vincent.  The punchiness and pace with which this is delivered is commendable – especially as this is a production which has developed over time. I spoke to members of the audience who had seen the play performed at Hope Mill where it was affectionately received.  That this is a play people have returned to see is a sure sign of its enduring merit, and the intimate setting of The Kings Arms upstairs theatre with its high dark ceilings adds another level of eeriness.

The Haunting of Blaine Manor runs at The Kings Arms, Salford until the 20th August. See it  if you dare.