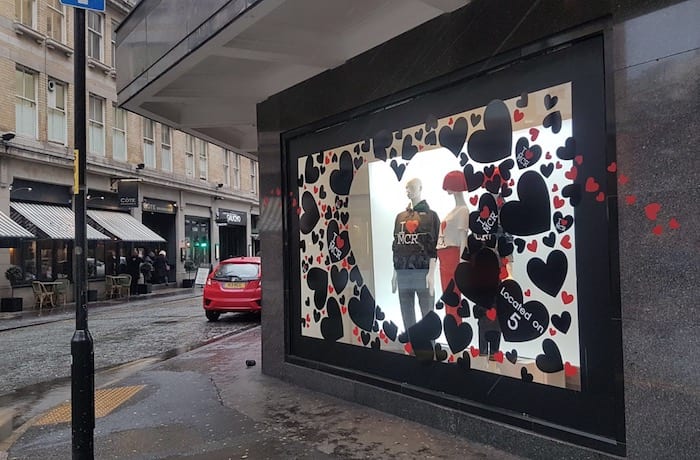 New owners Sports Direct have decided that they will close the House of Fraser Manchester store after Christmas and inevitably put at least 160 jobs at risk.

Always in unity and never afraid to voice opinions, the Manchester community have made no secret of their feelings about the plans to close.

Councillors William Jeavons and Pat Karney have launched a #SaveKendals campaign to stop the closure of Manchester’s House of Fraser store.

Manchester City Council declared that they will do everything it can do to get this decision reversed. “The next step is to meet with the owners,” said Cllr Pat Karney, secretary of the Manchester Labour Group.

“We will not stand by and see workers treated in this way. We will fight for this decision to be reversed. We want to speak to Sports Direct and if the issue is about rent, we will also need to speak to the landlord.”

“I’m heartbroken,” says general manager, Anne Latham, who has been championing the iconic store with the Manchester community for over six years. “But hopefully things get changed. The council have started a campaign on Twitter and I know we’ve got the city’s support.”

Current House of Fraser employee, Dean Anderson, said: “I have been an employee for House Of Fraser since September last year in the iconic Kendals building in the city centre of Manchester. I have worked in retail for 9 years, but it’s not a store it’s a family. Help me and my colleagues.”

Sir Richard Leese, Leader of Manchester City Council, said: “The Kendals building is a Manchester institution that has been a much-loved constant since it first opened in 1832, dominating its location on Deansgate as our modern city centre developed around it. The current 1930s building is a treasure of our city’s architecture.

“Generations of Manchester people have a huge fondness for the store and the City Council will do everything it can to get this decision reversed and support those working at the store who will be shocked at today’s news.”

The store is expected to close on the 28th January 2019. Until then, share your thoughts, feelings and memories of the iconic Manchester store below…

Sad times when greedy retail and property giants are responsible for not only the loss of an iconic store in Manchester, but also the livelihoods of the 100s people employed by House of Fraser and their concessions. Whatever happened to the sense of community? #SaveKendals

As a frequent shopper of the store and user of the great 6th floor Kendals Restaurant, this news that Kendals in Manchester in shuttling is a bit of a blow. It is my favourite department store! #SaveKendals