T’was a few sleeps before Christmas and all the town was still – not really in fact it was horribly busy with people in Christmas jumpers having enforced fun at the Xmas markets – so an ideal time to escape and enjoy the new offering from San Carlo.

“.PRETTY TO LOOK AT, TWINKLY LIGHTING AND COMFORTABLE IN A ‘SIT & EAT’ ALL DAY KIND OF WAY AS WELL AS THEIR SIGNATURE ‘BE SEEN & STARE’ VIBE.”

Based on the second floor in Selfridges in what has, in our lifetime, been a champers’ bar and that French gaff. Bottega is the latest offering from the Italian giants San Carlo who have straddled Manchester and beyond with their blend of style and food with substance.

On this day we were pleasantly greeted by San Carlo Group owner Carlo Distefano and his typically well whistle & fluted greeting staff. A few cheek kisses, tactile hand shakes and we were seated on a table big enough for Ginger’s lens. 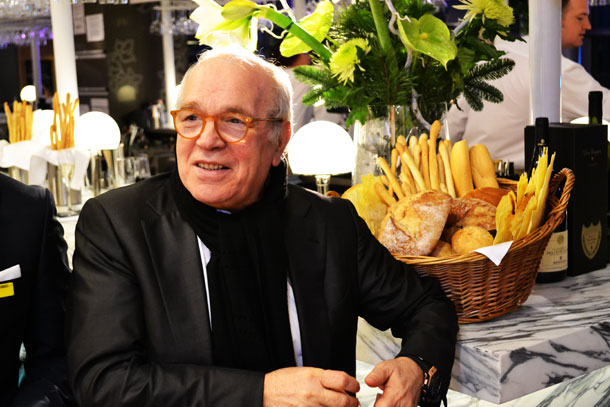 Like Cicchetti, it is based on a menu of small plates, Italian tapas-styley, but this time from the more French side of the region, offering an extensive menu and with daily specials.

The spacing of the room doesn’t seem much changed apart from a quite seamless blue colour theme with padded blue seating and marble tables – it does look very San Carlo, pretty to look at, twinkly lighting and comfortable in a ‘sit & eat’ all day kind of way as well as their signature ‘be seen & stare’ vibe. 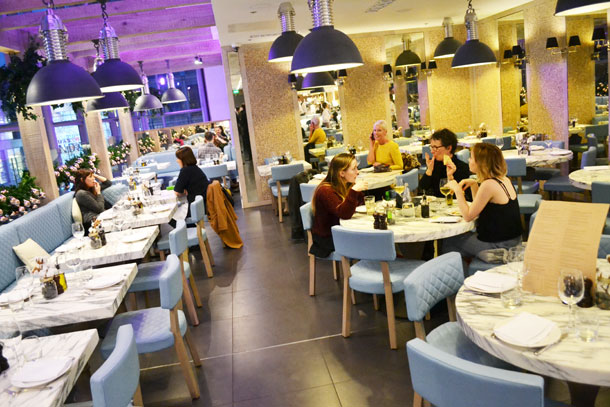 The staff are in jeans with those long aprons and there’s a Hed Kandi type soundtrack, presumably tailored to fit the Selfridges customer.

The menu looks good with small plates starting from under a fiver but they range from £2.80 to just short of £10. Plates available are fritti (slightly battered stuff), insolata (salad), pasta, carne (meat), pesce (fish) and pizza. Booze is reasonable with wine from £6 a glass and a house bottle from just short of £20. Obviously you can push the boat out, but so far so reasonable though I had heard murmurings from folk who had felt a little short changed by portion size. This wasn’t the case when we dined, in fact we were over faced by the portions (o er matron) and we did check other diners to make sure we weren’t being given media portions. 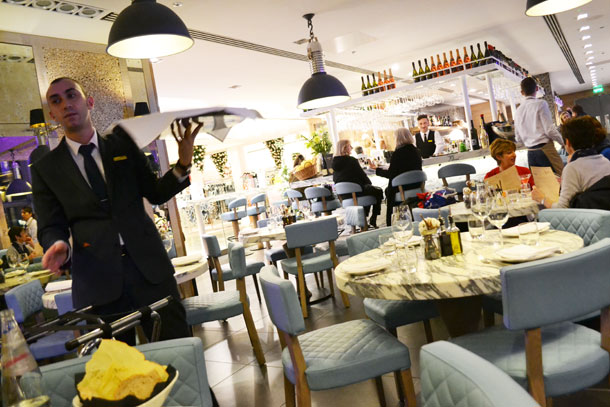 The staff are wonderful and we were superbly looked after by Frederico who guided us through the menu and also met the charming chef Nicola – one of the staff wrote that in my notebook so I hope it is spelt right – who has introduced an absolutely gorgeous mozzarella from his home town.

We started with (though in fact plates just come out when they are ready) beef Carpaccio with parmesan made sensational by the Burrata mozzarella which you cut in half and let the cream ooooze out and coat the beef, this was just beautiful. 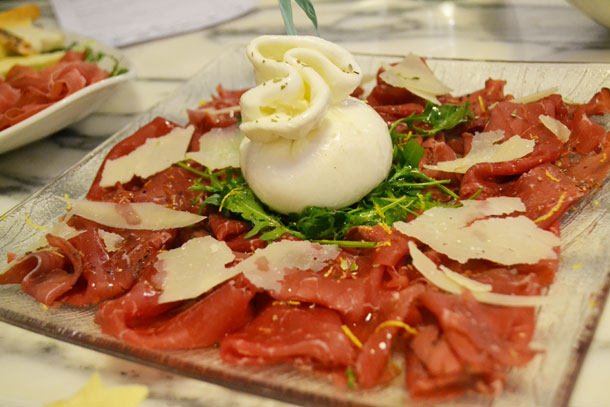 Onto a Fiorentina which sounds simple but was gloriously fresh and tasty as spinach met egg met cheese and made magic on the palette. 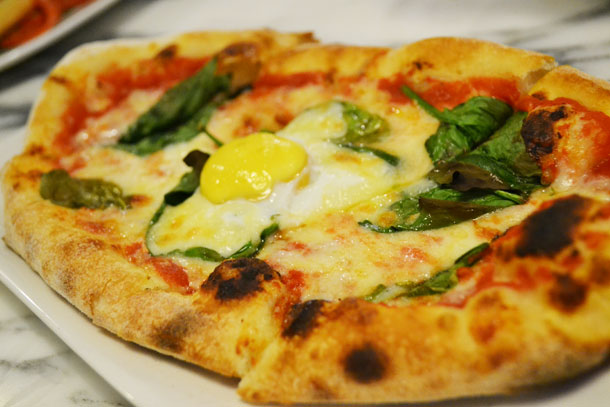 A deep-fried Panzerotto, which is basically a calzone pizza deepfried (wonder if they’ve heard of that in Scotland) divided the table. The Queen’s not good with deep-fried stuff and couldn’t taste the truffle that was meant to be in this whilst Ginger had found Narnia with this dish. 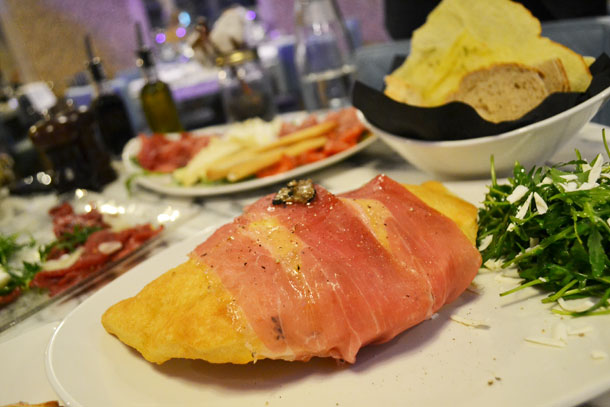 Rice balls with bolognaise looking like the unhatched spawn from Alien, shouldn’t have worked but was one of the highlights in a meal of highlights and was just fabulous whilst a suckling pig with braised celery gravy missed the mark for both of us and was the only bum note. 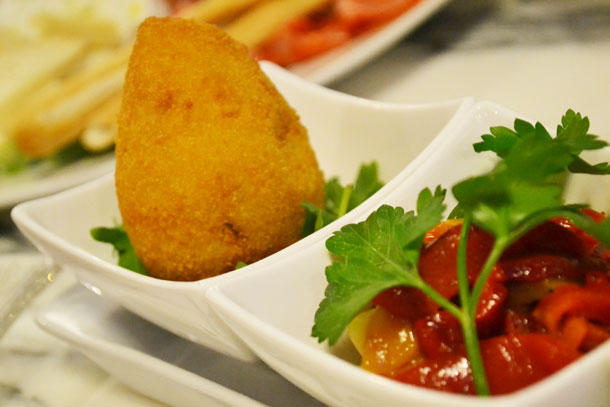 Then Nicola, despite protestations that another mouthful couldn’t be eaten if were to try the Boulbillion, sent out a Toulouse sausage with egg and spinach. We were so glad he did, this was the mother of all sausage from which sausage should evolve from. Fragrant is really the only way to describe this. A real assault (in a good way) of all the senses, soooooo tasty. 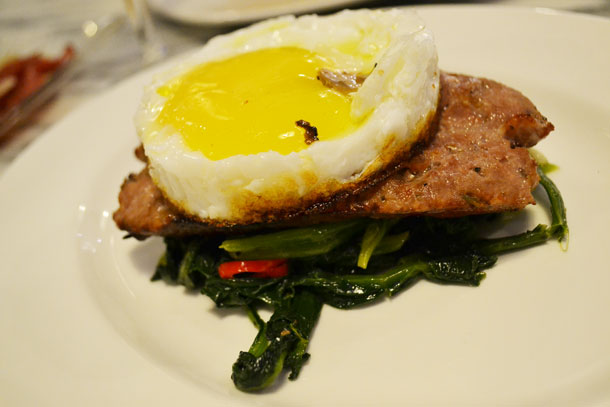 Onto the Boullibaise and this was served with some pomp and circumstance as the lovely Frederico divvied up all sorts of seafood delicacies and served with a divine broth. This is the Queen’s nirvana and indeed lived up to fishy dreams with a wonderful delicate sea-dog flavour. Its just under £20 a pop for two people and well worth it. 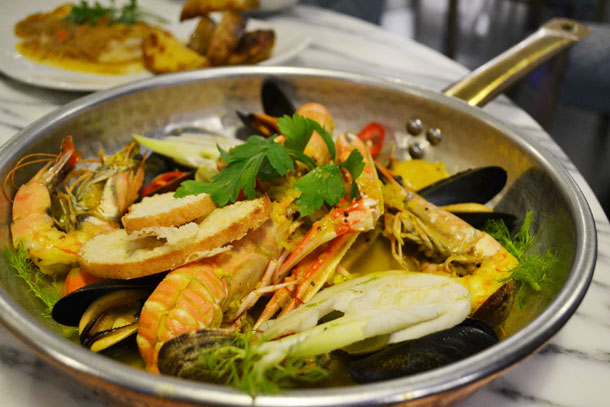 You would think that would be it wouldn’t you? But no, Ginger wanted pudding (the separate Dolci menu starts from £5) and opted for the Dolci Bottega which was basically bits of all the desserts on one plate. Again, sweet heaven and San Carlo have also opened Dolci in the basement of Selfridges, a must have visit if this is anything to go by. 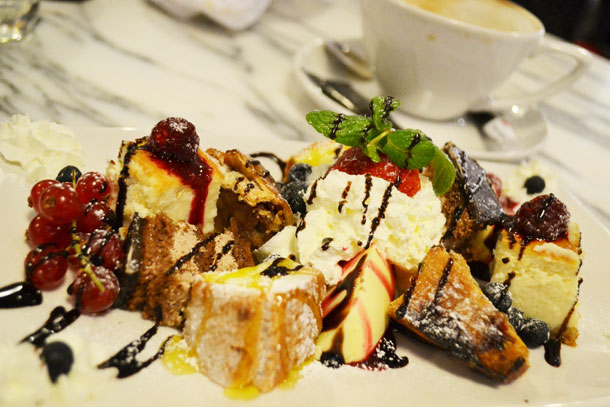 We’re smitten and may even be a little unfaithful to Cicchetti.