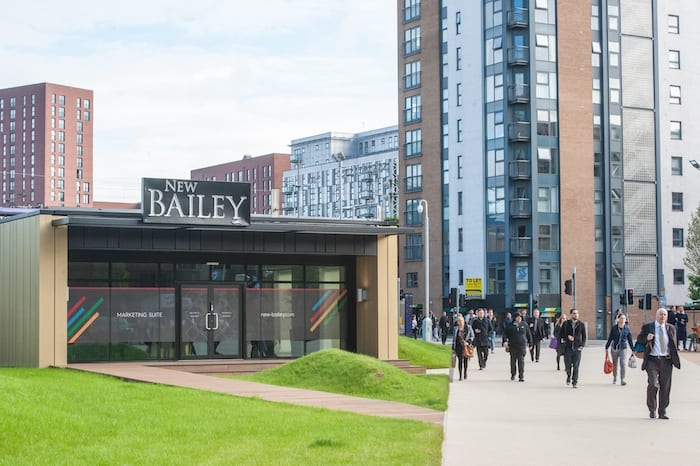 Salford Central, the city’s biggest regeneration project since the transformation of the docklands a generation ago, is poised to enter a dramatic new phase in the New Year.

Aimed at addressing years of neglect and degradation, leading to high unemployment, low education, crime and poor family structure which had seen the area fall within the top four per cent of the most deprived areas in the UK, a development agreement was signed with Salford City Council in 2006.

But the drawn out process of land acquisition and clearance, planning and CPO inquiries meant that work did not start on the massive 50 acre site until 2013.

The project is being driven by the English Cities Fund, a joint venture between Muse Developments, Legal & General and Homes England in conjunction with Salford City Council.

Some people believed it would never happen, admitted Muse Developments regional director Phil Mayall at a recent five-year review of the scheme so far. So it needed to be a game changer, an innovating way to approach development which raised expectations.

Planning consent for 12 phases to 2021 covers two million sq ft of prime office space – of which Salford had precious little – 849 new homes, 261,000 sq ft of retail and leisure space, 391 hotel bedrooms and a new footbridge across the Irwell into Spinningfields. It will create an estimated 11,000 jobs.

Jim Taylor, Salford council’s chief executive, said: “Nobody believed that what we were proposing at Salford could work, but thanks to our joint willingness to share risk, the close working relationship and the combined expertise of the fund, we’ve surpassed all expectations. There is real momentum in Salford now.”

Salford’s riverfront had been little more than huge surface car parks – used by people going to work in Manchester – and poor quality office buildings. It was the site of New Bailey prison, built in the 1700s, whose inmates were said to be forced to walk up to 19,700 feet per day turning the infamous treadwheel.

After the opening of Strangeways prison in 1868, New Bailey prisoners were transferred, and the redundant site lay derelict until 1872 when it was purchased and transformed into a sprawling Lancashire and Yorkshire Railway goods yard.

As the site is currently being developed, a team from Salford University’s archeology department is rediscovering the prison’s secrets.

The south bank is now dominated by the landmark One New Bailey, a seven-storey state-of-the-art office-complex. In a major boost to the whole project, the top five floors have been let to Freshfields Bruckhaus Deringer, the leading global legal services company.

Two New Bailey Square will rise 10 storeys next year, whilst another building is earmarked as HM Revenue and Customs’ third Salford location.

Mr Mayall said: “This is another giant step forward for the New Bailey masterplan. The fact that the government has chosen to relocate its employees to the scheme is testament to the offering that we have created through our partnership for make New Bailey a place where people really want to live and do business.”

Further along the waterfront towards the Irwell Street bridge, a Premier Inn hotel and strikingly designed NCP multi-storey car park have been completed.

The transformation of the Chapel Street area has been dramatic, showcasing many of Salford’s listed buildings including the town hall in Bexley Square, St Philips Church, the cathedral and former education offices.

Residential development at Timekeeper’s Square and Vimto Gardens – on the site of the old Vimto factory in Chapel Street – have won prestigious awards and more are likely to follow as the work continues.

If it was difficult before, the transformation now makes it almost impossible to see the join between Manchester and Salford.