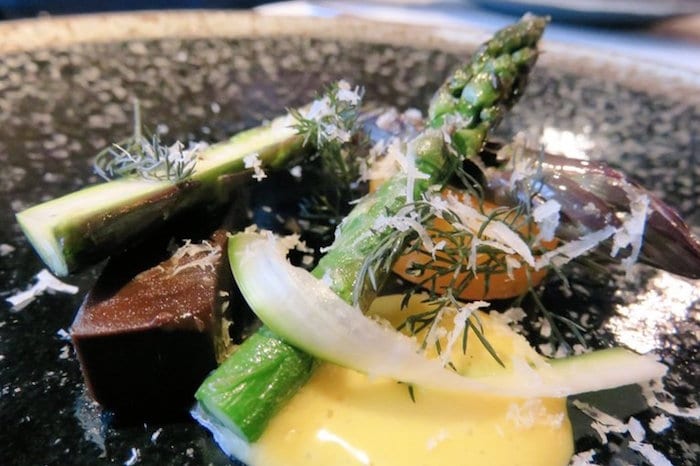 Don’t be put off by the slightly over-indulgent decor and casino location.  It’s the food that makes James Martin worthy of its spot on the Manchester culinary map.

With a celebrity TV chef at the helm, this fine dining establishment in the atmospheric Great Northern building is somewhere to visit for a special occasion or just to enjoy a unique culinary experience.

With its eclectic take on British culinary classics, there’s something for everyone to enjoy whether you’re a meat lover, a fish fanatic, a vegetarian or prefer all three in one dish (go for the sea trout main with pork loin if you do).

Having visited just before Christmas and enjoyed their festive dishes, I went back to sample their new summer menu and see what surprises they had in store. 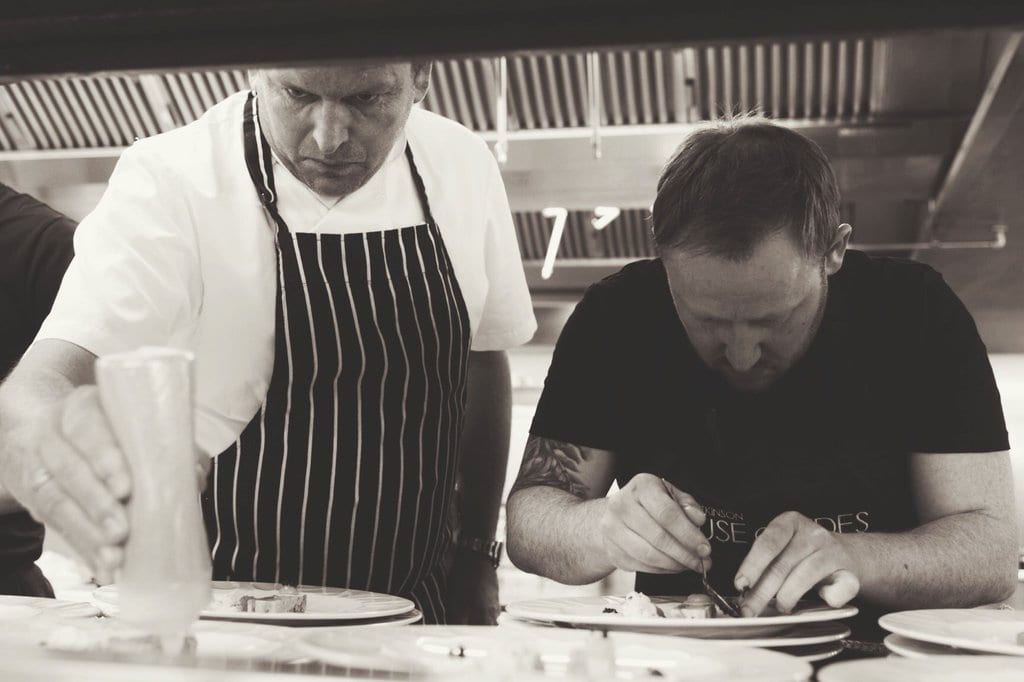 Opting for the home-cured meats sharing platter to start, we were not disappointed in the array of hams, sausages and other cuts sourced from farms around the UK. Moreish beef, cured sausage and thin slivers of ham were accompanied by savoury chutney and seasonal vegetables that were also proudly British.

The centre piece of the platter was a black pudding designed to look like a plant pot with the vegetables representing flourishing fauna and the black pudding as the soil beneath. Nice to look at but the pudding was too dry to be properly palatable and incredibly crumbly making it impossible to eat without using a spoon.

We also sampled the asparagus starter that came with black garlic, a creamy sauce, an egg yolk and a dusting of Berkenwell cheese. All the flavours came together beautifully but the egg yolk, which was apparently slow-cooked to allow it to take on a fudge-like consistency, was just a bit tasteless on its own. A shame after all the painstaking effort that went into cooking it.

The butter-poached quail starter with a pea sorbet fell off the bone in an exquisite morsel of meaty perfection. Unfortunately, the tiny portion was made to look even smaller by the gigantic plate and I was left craving more once it had been swiftly devoured in just three bites.

Our main courses were heavily meat-orientated and included Himalayan salt-aged lamb in a red wine sauce and slow-braised wagyu short rib served with Roscoff onions. Both cuts were superb and the seasonal side of mixed garlic greens and chips soaked in onion and dripping gave the course a wholesomeness that you usually achieve after eating a full Sunday roast. The only thing that let these dishes down was the fact they were served at a slightly lower temperature than we would have liked.

James Martin is known for his impressive desserts and on this occasion, the menu had been given a summery update with seasonal fruits and classic favourites- all with that nouvelle cuisine twist. A great fan of meringues and cream, I ordered the English strawberries with toasted meringue and a buttermilk sorbet which was freshened up with some strong mint leaves and chunks of sweet honeycomb. It was served with a tiny phial of sarsaparilla. It was an acquired taste with an almost medicinal flavour that I definitely could have done without.

The second sweet treat was a coconut and mango mousse served unusually with pineapple, cucumber cubes soaked in elderflower and wild puffed rice to finish. The cucumber was quite an odd component that only worked as the other flavours were so refreshing and strong. The wild rice puffs added texture that was not necessarily needed while pretty purple flowers added a burst of exotic colour but otherwise offered nothing to the taste.

The dishes we tried were full of rich flavours and ingredients, making them very filling. And the talent of the chefs definitely shines through when you’re able to taste a bounty of wonderful and complementary flavours in just one bite. It also makes a welcome change in a city with so much culinary choice to see good British food in the spotlight.  However, the summer menu at James Martin is probably not for fans of plain food and huge portions.

A definite contender for a romantic evening or an alternative to Spinningfields, the new menu is well worth a taste, but be warned – you may be asked for ID at the casino door entrance.