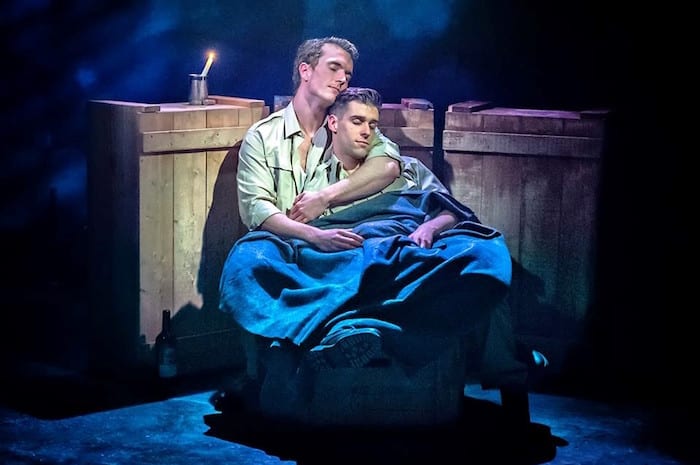 When I first read the words World War II and musical in the description of this show, I was a little confused. I found it difficult to imagine something that could perfectly blend the two things together. But Yank! did that and more, combining wonderful music and brilliant dance routines with the heartstring twanging of a WW2 play.

It begins in modern day San Francisco where a young man finds an old diary in a junk shop, before going back to 1943, where awkward teenager Stu joins the US Army. It’s here that he gets to know himself and realises that the pin-up girls of the era are not for him. Instead, he falls for the charming Mitch, a fellow soldier.

Yank! explores what it is to be a man, to fall in love and the struggles of being gay at that time, when being true to yourself could have terrible consequences – especially in the army.

Although it’s bittersweet and heart-wrenching in parts, Yank! is by no means depressing. The fabulous songs and Chris Cuming’s fantastic choreography are enjoyable throughout and there are many beautiful, heartwarming and funny moments. There’s even a brilliant tap number and an intimate slow dance.

There are many points at which the the fourth wall shatters slightly and the audience feels directly involved. The play actually begins with one of the actors emerging from the audience itself. The intimacy of this is pure genius and works brilliantly in this theatre.

The lead couple have amazing chemistry. Stu, played by Scott Hunter, radiated an innocence and adorable naivety whilst Mitch, played by Barnaby Hughes, could break hearts with his facial expressions (and his jawline).

It’s incredibly soul-stirring and one of the most romantic performances of a gay couple I’ve seen.

But it was the only female cast member, Sarah-Louise Young, who stole the show for me. Extremely versatile and an awesome singer, every character she portrayed was both believable and captivating.

It’s an exquisite production and perfect for an intimate and homely space such as the Hope Mill theatre. The set is basic, with several wooden boxes with the words ‘US Army’ stamped on them, some occasional curtains and a bed, but nothing too flashy is needed. It’s the kind of play that can unleash the audience’s imagination without the need for excessive scenery.

Although a rite of passage story at its core, Yank! is so many different things rolled into one. The audience couldn’t help but get emotionally involved at many points in the show and there were audible gasps and sniffles throughout.

The cast and crew fully deserved their standing ovation at the end.

So, with a powerful beginning, a moving ending and everything from laughter to blinking back tears in between, I can heartily recommend Yank!  I always know if I have really loved a performance if I feel an ache of longing to perform myself and I certainly felt that.

Go and see it. It’s on until Saturday 8th April so get your tickets before you miss out.