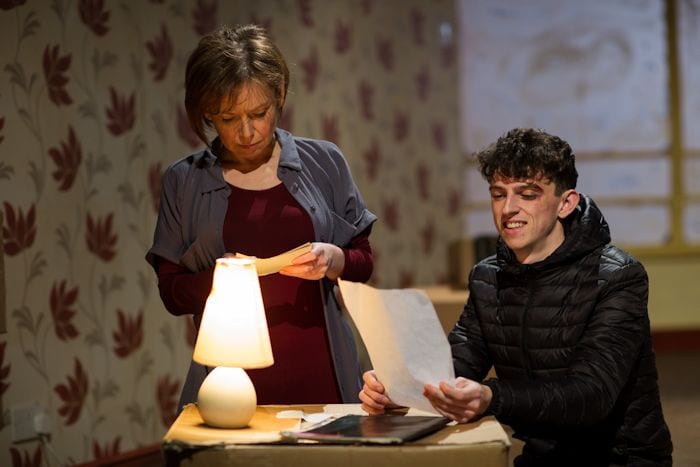 With storm Emma battering the country, brave audience members ventured out to the beautiful Hope Mill Theatre to see this two hander about homophobia and hate crime.

On the night I attended, the beast from the east took a supporting role, providing the venue with a rattling door and whistling winds, adding to the drama, tension and already excellent sound effects in this production of Phillip Ridley’s play originally staged in 2001.

This searing and scorching play is the perfect antidote to the horrendous weather we are experiencing, as it contains unexpected moments of genuine warmth amongst the pain and heartache.

Anita is a mother emotionally stunted by grief, as her son has been killed in a homophobic attack. She is moving in to a rundown flat in Manchester (Dagenham in the original script) and she is looking for answers.

In case you are expecting a nasty revenge tale in the style of Death Wish, or John Wick, rest easy. This is a clever and beautiful piece of theatre that explores secrets, lies, prejudice and the thin line between love and hate.

As a mother, Anita needs closure but also feels lost and out of the picture, as she didn’t know that her son Vincent was gay. Davey is a local young lad who claims to have been the last person to see the body. He is looking for answers too.

These two lost souls come together on a quest to find out who Vincent River really was, beyond the newspaper headlines that have reduced him to a ‘victim’ with a secret life.

Although the play is now 17 years old, it still resonates fully, as hate crime is sadly still very much still with us. For every image of a parent accompanying their son or daughter to a Pride event, there is a grim reality – 20% of the homeless population are LGBT, in some cases because they have been rejected by their families.

John Young directs with urgency but allows Joyce Branagh and Dominic Holmes time to flesh out their characters. They both have skeletons in the closet, share deep pain and are looking for a way through a minefield of grief and despair.

Branagh is excellent. She begins the play holding her cards close to her chest but, as the play unfolds, she begins to unravel before your eyes. She did not really know her son so she hears the truth about him at the same time as the audience. This is such an intimate venue that you see her body language change with every revelation and you react with her.

Dominic Holmes is revelatory, flitting about the set like a bat trying to avoid being picked off by a predator. The play hinges on the chemistry between him and Branagh. Together, they generate enough electricity to light up the darkest pockets of New Islington.

Phillip Ridley’s writing is intense and makes you question whether equality actually exists.

Because of this, the piece is raw and hits a nerve every few minutes. There is some comedy – albeit black comedy – and this is most welcome. But ultimately this is a play of hope because these two flawed characters find each other at a time of loss and try to offer a helping hand through a meeting of minds and, at the same time, ease their own pain.

Alice Smith’s set is filled with rips and fissures representing the unloved flat that Anita is about to live in and the unresolved issues that she hopes to put to rest.

Like many plays that hinge on revelations and secrets, there are too many answers and coincidences to make it entirely credible

Nevertheless, this remains a relevant and truthful play that dares to question how tolerant we really are. And with two actors who bare their souls throughout, never once missing a beat, it’s a play that begs to be seen.