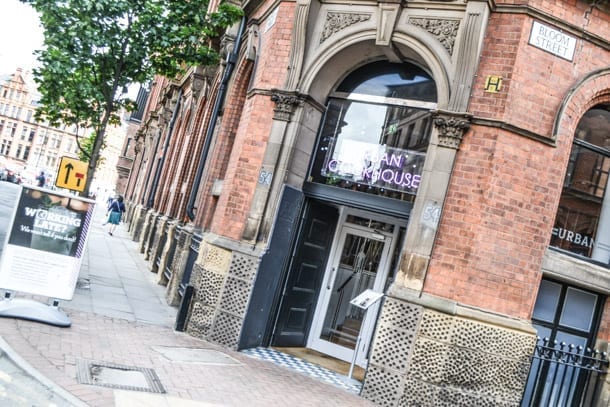 Urban Cookhouse is a refreshingly refined venue on that vast Princess Street strip with enough elegance and the right amount of camp to please just about everyone. It just struggled to fit in. So it’s been doing some fine tuning to find the right blend of style and substance…

‘…the right amount
of make-up to give
it personality’

We reviewed Cookhouse in April, shortly after it opened earlier this year. We were impressed and had heard there had been a revisit to the entire menu so we decided to pay another windy walk visit to find out how this new independent is getting on.

A lot of thought has gone into the decor. It describes its style as “relaxed urban,” which is a perfect description. It’s a good looking, stylish, modern space with minimalist decor – exposed wood and metal with some original features – but with just the right amount of make-up to give it personality and enough splashes of purple to satisfy a member of the Royal Family. Which is quite appropriate as this is Princess Street, after all. 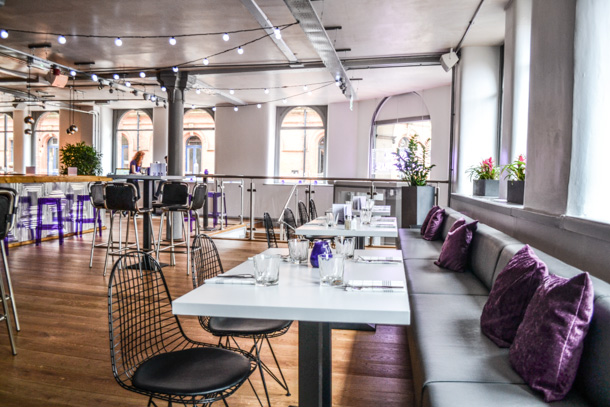 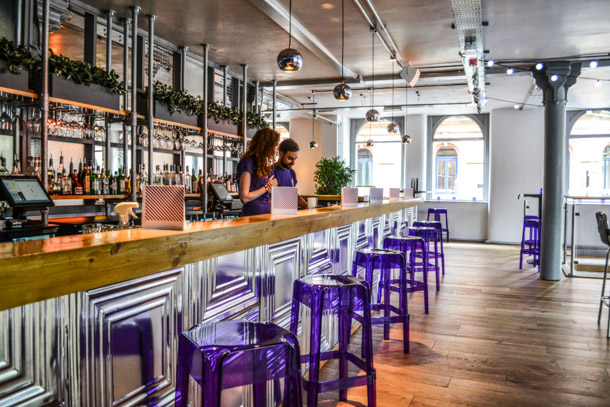 The new NYC diner-style menu, billed as ‘a flavour of downtown New York,’ is designed to appeal to a cosmo variety of tastes and offers something for everyone from steaks and burgers to Caribbean and Thai. Some dishes were actually cheaper than last time we visited, evidence that some fine tuning has been going on. 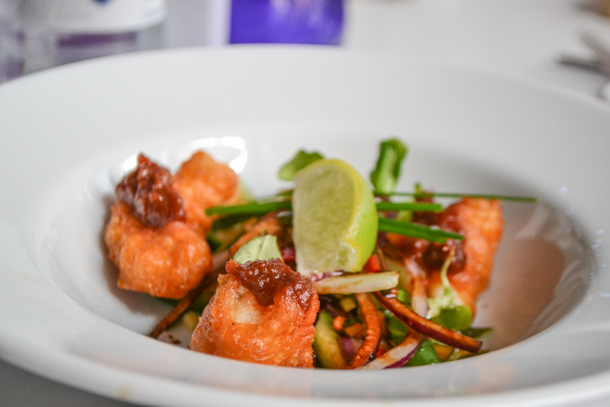 The cod cheeks encased in a crisp, light batter were wonderful with generous helpings of the sweet chilli jam, which was smoky-sweet, with enough of a kick to lift the flaky fish. The crunchy slaw underneath, flavoured with soy was a revelation and was definitely a favourite amongst my dining companions.

The lamb was elegantly presented – like most dishes here – but just lacked that little something to make a good dish a great one. The almond added much needed texture to nicely cooked fillet, charred red onion was bitter sweet but the harissa just didn’t add enough punch. An intense chilli, garlic kick away from perfection. 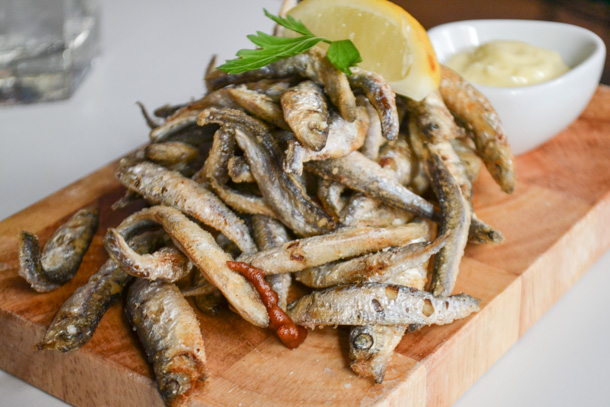 The whitebait was a nibble rather than a starter and therefore slightly cheaper but the portion was so generous it looked like we had been served a fisherman’s entire catch for the day. We would have preferred to have had it served on a plate or in a bowl rather than on a board. We just don’t see the point of serving food on anything else.

Of the mains we chose, the star was the 125th Street Sub (£13) – a generous portion of breaded pig cheeks in tomato gravy topped with jalapeno cheese. Crispy batter with a hot, sweet chilli sauce and a fresh slaw were perfectly balanced with the crisp vegetables and soy sauce, the spice from the jalapenos kicking through the cheese and complimenting the pork and sweet bun, helping to lift the dish not far from foodie heaven. 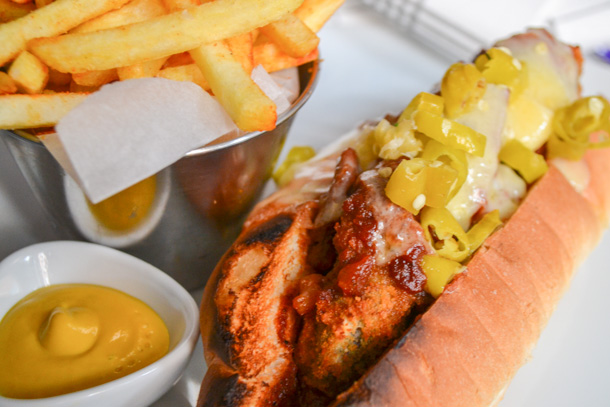 The Coriander and Lime Chicken (£11.95) with New Potato Salad and Slow Roasted Vine Tomatoes was nicely cooked, moist, and spiked with coriander. We were expecting the new potato salad to be a classic potato salad dressed in mayonnaise, but it was actually boiled new potatoes with a green salad. Another generous portion. 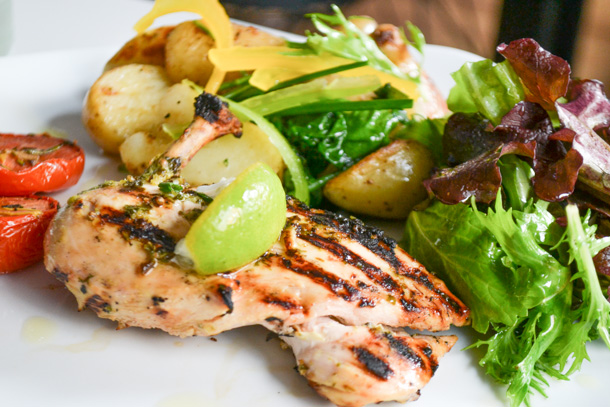 The Urban Legend (£9.95) is a beast of a burger. Some cheeky onion rings added to its stature and the coleslaw somewhat lifted the flavour of the whole beast. It was nice enough without blowing anyone’s socks off. Served with fat chips – a nice change from your usual standard fries – it was good value for just under a tenner. 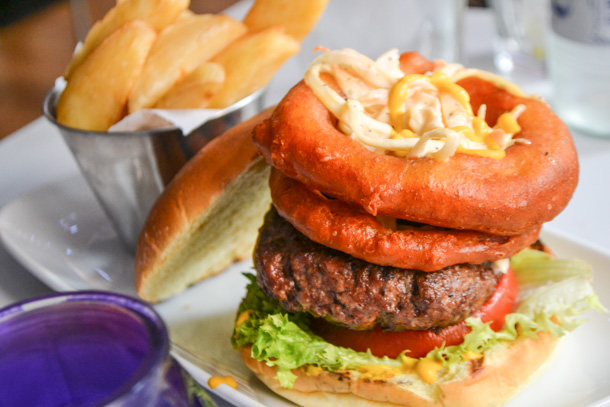 When it comes to dessert, chocolate is the perfect way to end any meal, so we were surprised that there wasn’t a dish with even a trace of it on the menu. This is either brave or foolish.

In the absence of anything remotely chocolatey, we chose The Big Apple, Cup Of Joe and Strawberry Soup (all £5.25).

All three dishes were very photogenic and would all be contenders for the best looking dish in Manchester (dessert category), if such an award existed. Maybe it should. 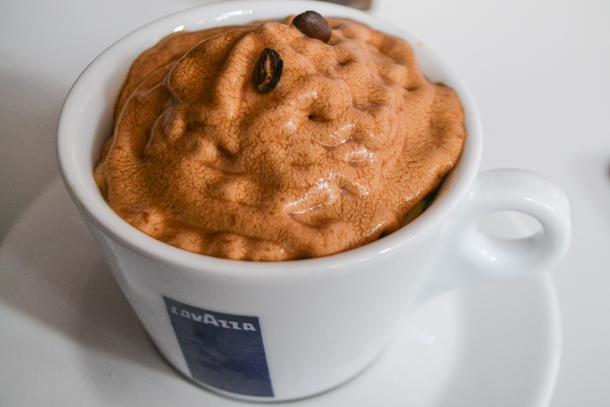 The Cup of Joe, an espresso cheesecake with coffee foam, was a beautiful thing. An incredibly rich dessert topped with coffee froth, but you had to dig in deep to get a bit of everything.

The Big Apple (apple sorbet, cider doughnut, apple sphere and apple candy). The apple jellyish sphere releases a puddle of intense apple liquid which was pleasant enough. An apple crisp brought another texture dimension to the dish, but the apple candy, although being a nice idea was rather difficult to eat. The sorbet was refreshing and lifted the dish – probably the best part and the doughnut was nicely flavoured with a cider apple jam, but a little undercooked in the middle. Lots of style but a little more substance needed. 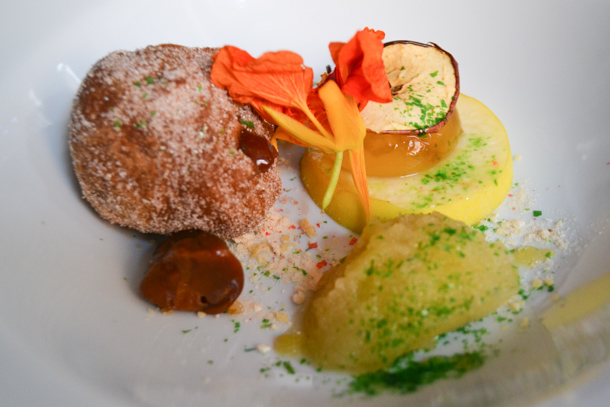 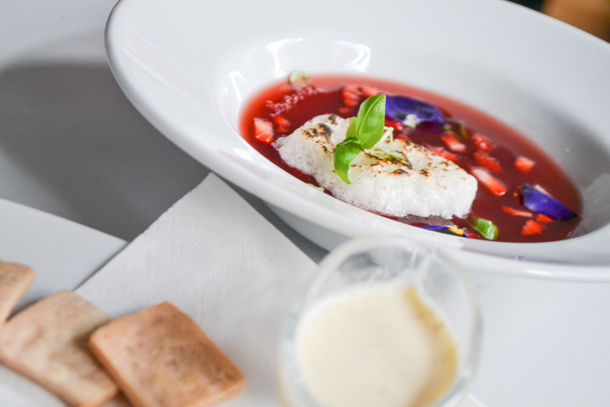 But when it comes to food, looks aren’t everything. Our favourite was the Strawberry Soup with a floating meringue, shortbread croutons and pannacotta, sprinkled with petals. This looked good, tasted good and by golly… You probably know the rest. The perfect summer dessert. Lovely.

We’ll be back – the lunch menu is particularly good value at £9.95 for a main and a drink. But next time we might have to smuggle a bar of chocolate in to get that quick chocolate fix. Let’s hope they don’t start searching you at the door. 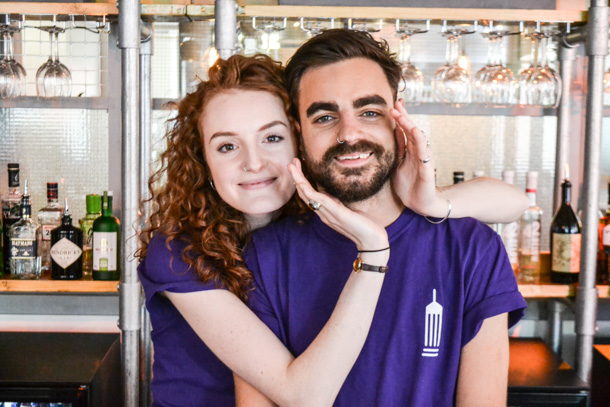