Review: This House at The Lowry 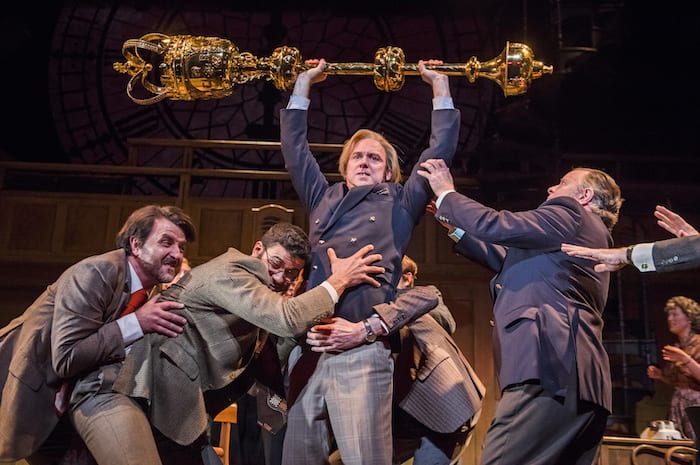 Brexit, the Windrush scandal, anti-semitism in the Labour Party, and a government propped up by the DUP. Politics just isn’t funny at the moment.

So what better time to go and see James Graham’s brilliantly biting look at life in Wesminster in the 1970’s.

It’s 1974, and even though the folks in power are a different party, much of what the public is experiencing has parallels with today. There is a hung Parliament, and the Labour Party is hanging on by a thread. So they invite some of the other smaller parties, laughingly referred to as the “odds and sods”, to work with them.

What is refreshing about this frequently funny play, is that we witness what goes on in the back rooms, behind the scenes, and in the bars. It’s all very honest and frank, a bit like eavesdropping on the corridors of power as a party clings on for dear life.

This House has been staged at the National Theatre, the West End and many people have seen at cinemas as part of NT Live. You can see why it is so incredibly popular, because even if politics leaves you cold, there is plenty of warmth here, provided by the characters’ desire to stay in power “to keep the others out.” They eff and blind their way in and out of situations, and sometimes bend the rules to such an extent you laugh out loud.

Graham’s skill as a writer is that these politicians are far from stereotypes. Often vilified in the media as out of touch with the public, self-serving and claiming expenses for luxuries, the play gives you the flaws, but also explores the fact that the job involves unsociable hours, sacrificing time with family and friends, and that you may be forced to make decisions that go against the very reason you entered politics in the first place.

The huge cast have a monumental task. The Lowry’s Lyric stage is vast so they have to project their voices, and much of the dialogue is as fast as the changes taking place in Parliament at the time.

So at times some of what we see is delivered like a gag. On a smaller stage this would be more poignant, as it would be delivered with more breathing space. So, to be honest the venue is not always ideal.

Nevertheless, all the actors deliver like athletes, passing on the baton, gliding across the stage and on to the next scene with ultimate precision. With such a huge cast, it is difficult to single out individuals, but Natalie Grady’s Ann Taylor – the only female Labour Whip – is bloody brilliant. She waits for the right moment and speaks her mind with such passion you are reminded of the late, great Jo Cox.

The supporting actors also do a grand job, as this is a play which celebrates the ensemble, as this is a production built on the fact that no one is merely in the background, just like politics.

Jeremy Herrin and Jonathan O’Boyle direct the play like a race to the finish. So even though it is almost three hours long, the time flies by. Each scene is punctuated by a brilliant line designed to keep you smiling. It’s also perfectly poignant, as MPs ‘live’ for their jobs, which affects their health and well-being.

Rae Smith’s set design is vast and captures the House perfectly. You are in for a treat if you can get stage seats as you will feel totally involved and an in-house band will keep you entertained between scene changes. You can even pretend to vote.

Politics has become very po-faced and we lack much of the satire that we used to enjoy. This House takes you back to a world without social media and the constant pings of that echo chamber. It invites you to laugh, shed a tear and gain an insight into this incredibly volatile and unstable world.

I absolutely loved this production. Do go if you get the chance. It’s one of the best plays you’ll see all year.