Review: The Rocky Horror Show at the Opera House 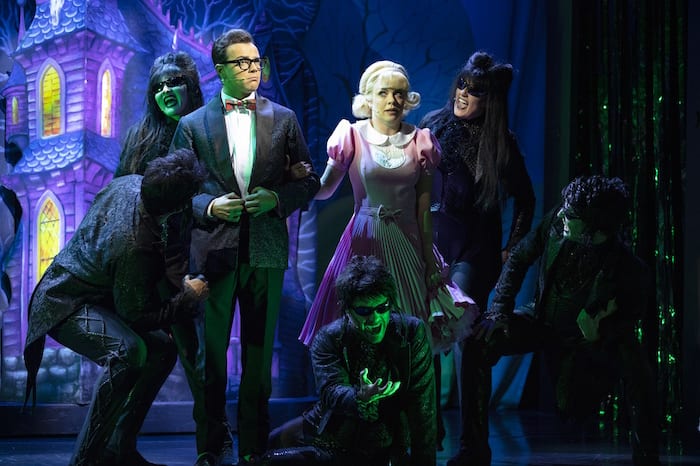 Richard O’Brien’s hit musical The Rocky Horror Show has such a faithful following that you could just churn it out like a factory produced piece of theatre and people would turn up because of their love for their show.

This latest tour production breaks the mould. It is dazzling, fast paced, frequently funny and filled with top drawer performances from all involved.

Coronation Street’s Beverley Callard is the Narrator of this wild and wacky tale of a couple called Brad and Janet (Ben Adams and Joanne Clifton) who take a wrong turn and end up at a castle after their car breaks down. Instead of this being the home of a serial killer who will dispose of them, there is something far sexier at play here.

Enter Frank N Furter (played with a real sense of gleeful mischief by Stephen Webb) who sets out to turn the innocent couple into wild things and make their hearts sing. His sidekicks include Magenta (Laura Harrison), Riff Raff (Kristian Lavercombe) and a newly created character called Rocky (Callum Evans) who create a sense of mayhem whilst breaking down gender boundaries.

This camp and horrifically funny tale does not pretend to be high art. Sure, during the second half the sense of ridiculousness may overwhelm those who prefer something slightly more serious. And, the plot has never made much sense.

But it is a celebration of drive-in movies and everything that comes with that. What makes it special is how ahead of its times it was. There is a real lack of toxic masculinity on display here and that is really welcome, because the show celebrates gender fluidity, at a time before anyone knew it was a thing.

As for the leads, you won’t find better. Laura Harrison deserves the first mention as she opens and closes the show as the sweet voiced Usherette but is also a magnificently morose Magenta.

Joanne Clifton has earned her musical theatre stripes in Flashdance and Thoroughly Modern Millie. Here she is cute and clean cut as Janet and clearly loves exploring the fact that she is about to tempted to the dark side. She is in fine voice and has great chemistry with Ben Adams as Brad, following their successful partnership in Flashdance.

Kristian Lavercombe is the perfect Riff Raff, his awkward movement and dodgy accent straight out of a B movie.

The wonderfully named Miracle Chance is a joy as Columbia, a helium-filled excitable character who makes you want to jump on stage with her and dance. Callum Evans is an actor, singer and gymnast, and performs all three roles with enough energy to light up Manchester.

Everything about this production is completely spot on, from the superb narration from Callard who bats hecklers away like tennis balls with real class and authority, through to the supporting actors who sing and dance their tights off.

If you want to chase away the January blues, have some fun and do The Time Warp, this is the perfect show for you. If you have tickets for a Monday, it will give you that Friday night feeling and all that entails. It’s that good.

So grab your tights and lippy and get a ticket. This production is rock solid and just like a cream cake. Naughty but nice.

The Rocky Horror Show is at the Opera House until 26th January.