Review: The Maids at HOME Manchester 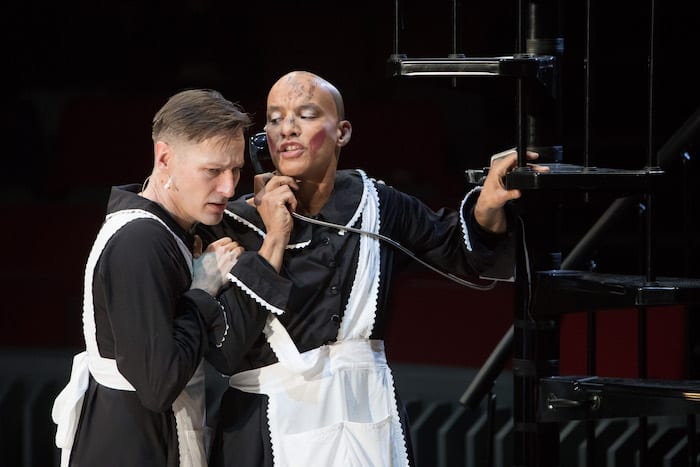 When Jean Genet’s The Maids was staged in London a couple of years ago, Orange Is the New Black’s Uzo Aduba earned plaudits for her performance. Whilst HOME may not have bagged as big a star as that, there is a great deal to savour in this black comedy.

The first thing you notice when you enter the space is the lack of stalls. HOME have totally changed Theatre 1 to house this production. Lily Sykes’ production is staged in the round so a new space has been created with the audience sat upstairs.

Ruari Murchison’s messy and chaotic set design features flowers, the sands of time and anything that the maids spill on the floor. Expect to be involved for the first five minutes in a section which is reminiscent of the antics of the Blue Man Group, so do not sit at the front if you do not like audience participation.

If you are unfamiliar with the plot of The Maids, it is essentially about masters and servants and the interchangeable roles that arise. When the cat’s away, the maids will play.

Solange (Luke Mullins) begins as a subservient character who bows and moves across the set like a meek mouse. As time goes by, you realise this character has pent up anger at the way she is treated. The costume she is forced to wear tells everyone that she is a servant. Her work is scrutinised and her mistress takes away in one hand what she has given her in another.

Solange’s sister Claire (Jake Fairbrother) mimics her mistress and enjoys the games, but there is something more reserved about her demeanour. If she knows the boss is coming home, she darts about the house frantically, trying to remove all traces of the darkly comic fun that has taken place.

The two maids have a mix of respect and revulsion, depending on the day.

For me, Danny Lee Wynter’s mistress is the most interesting character. His interpretation is a joy to behold, reminiscent of Jessica Lange’s portrayal of Joan Crawford in the TV show Feud: Bette and Joan. Wynter plays the role like the fading movie star, mannered and always playing to the mirror and the audience, desperate to cling onto something resembling power.

It’s apt that one of the characters is called Solange because, in my warped mind, these two sisters are Beyonce and Solange, and the mistress is the master, Jay Z. I half expected him to burst through the door, asking where his tea was. But I digress.

Jake Fairbrother and Luke Mullins have a difficult job. They must hold back much of their emotion as these maids are trapped and can only let loose when they are playing a role in a game. But they are both highly watchable.

Although Jean Genet’s play is bleak, the humour does come through and it questions your perception of people who ‘serve’ you. It is not for everyone though, as it is slightly repetitious, reflecting the boredom that these two feel every day. And none of the characters is particularly likeable.

The Maids is an exploration of power. We have heard from Hollywood actors about the abuse of power in the film industry. But what about the people who change the beds and hoover the hallways? Are they the forgotten voices because they are not famous or rich? So everything here is incredibly relevant and familiar, just heightened and much bleaker.

If you want to see something slightly subversive with a strong political streak running through the middle which challenges you and leaves you feeling perplexed, with more questions than answers, give it a go.

The Maids is at HOME until 1st December.