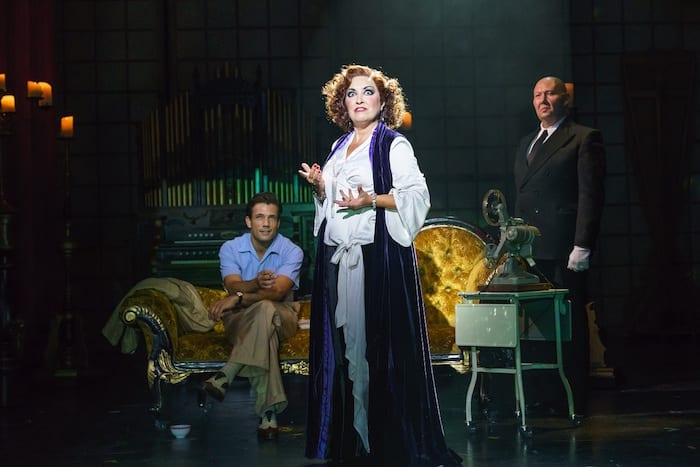 Manchester was treated to a break from the usual grey skies and rain to bask in the warm glow of Andrew Lloyd Webber’s Sunset Boulevard.

The production, based on the Billy Wilder movie of the same name, beamed from The Palace Theatre on its opening night this week.

The 1950 film received critic’s praise, landed three Academy Awards and was deemed “a giant amongst motion pictures” and now in 2017, the stage production hasn’t downsized in its critical acclaim, after receiving rave reviews during its UK tour.

In late 1940s Hollywood, the golden era of the silver screen, we meet Norma Desmond a fading silent star.  Desperately clutching to her glory, Norma hires an unsuccessful young writer to help story her comeback to screen.

The production simply overspills with talent. Returning to the role after briefly understudying for Glenn Close in London last year, Ria Jones is simply stunning as the deluded and vain Norma.

Harnessing the melodrama one may come to expect from such a larger than life fantasist, Jones balances this effortlessly and with conviction, commanding the stage with a resonant presence, particularly during her soaring rendition of As If We Never Said Goodbye.

Danny Mac plays impoverished writer Joe Gillies, who is drawn into Norma’s fantasy world with dire consequences. The ex-Hollyoaks star clearly shook off any ridiculous preconceptions of his ability to take on a theatre role and proved there is life after the soaps.

Other noteworthy performances are Adam Pearce as Norma’s doting butler Max, along with Molly Lynch as the sunny and sharp Betty. Neither is aware of how their affections will shape the fate of Norma and Joe.

The creative team have done a phenomenal job of recreating the magic of old Hollywood glamour, going beyond the superficial nuances to somewhere where new worlds are created in front of us.

Part set in Paramount Studios, the characters are surrounded by spotlights, moving scenery, cameras and stagehands.

Only in the movies can we co-exist in the world we actually live in and the one we create for ourselves. It’s the perfect metaphor for the delusions of our protagonists.

Sunset Boulevard is a harmony of infectiously catchy songs, in a story of love and obsession, amongst a backdrop of fabulous visual effects. A hot ball of scorching energy that’s not to be missed.

Sunset Boulevard is at The Palace Theatre until 4th November.