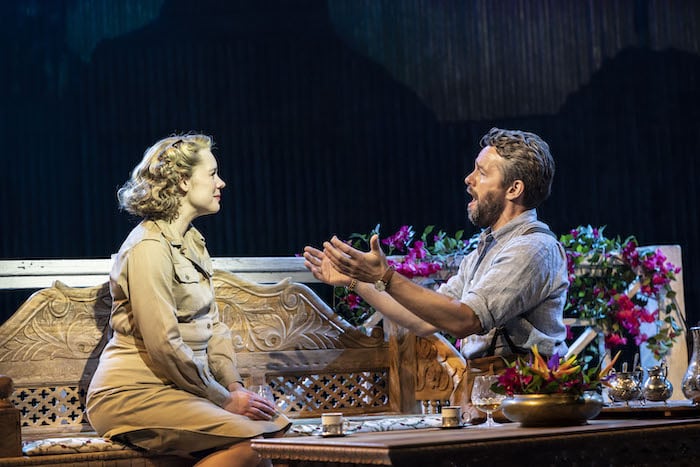 In the midst of a heatwave, the outstanding Rodgers & Hammerstein musical South Pacific has arrived in Manchester’s Opera House.

With familiar names such as Julian Ovenden (as seen in Bridgerton, amongst others), Gina Beck, and Joanna Ampil, the classic tale is retold with a shift in dynamics.

Taking place on an island in the south Pacific amidst World War Two, this show portrays multiple love stories, heartache, heartbreak, and a stand against racism all dispersed between catchy tunes you’re bound to be familiar with.

Based on the 1958 film, this production brilliantly represents the values held by society in the 50s while intensely flipping the outdated beliefs and mindset that protrude throughout the story on their head.

One of the best examples of this is during the song You’ve Got To Be Carefully Taught in which Lt Cable and Emile sing about how racism, and fear of people who don’t look like you, is instilled into you from a young age; it’s not something you’re born with, but something that is taught.

It could be said that the movie shows the characters to be accepting of this, taking it for what it is – but in this production, the characters challenge it and question this way of thinking.

Ensign Nellie Forbush (Gina Beck) is a nurse working on the island, who crosses paths with the charming Frenchman Emile de Becque (Julian Ovenden), who seemingly begin to fall head over heels for each other until Nellie learns of Emile’s late wife, a Polynesian lady with whom de Becque has two children by.

The idea of Emile, a white Frenchman, being with a woman of different skin colour shocks and disgruntles Nellie, revealing her prejudiced nature.

Interesting to note is that the original film was released in 1958, and it reflects the social attitudes held by society at that time. What is clever about this production, however, is the shift in dynamics that makes Nellie’s outlook look small minded and out of touch in today’s society.

Lieutenant Joseph Cable (Rob Houchen) arrives on the island, being assigned a mission of deterring the Japanese soldiers that are rallying together on the surrounding islands.

He is introduced to Liat (Sera Maehara), a native child he falls in love with. This romance is difficult to swallow for modern audiences, given that his love interest is a literal child – but the production seems to age Liat up by casting Maehara who portrays her as a late teen/young adult.

As you can imagine, the huge group numbers such as There Is Nothin’ Like A Dame are fantastic to see, the bright coloured light illuminate the stage in yellows, pinks, and purples while the large choruses of Marines and Seabees convincingly sing about missing women’s companionship.

The staging is simple but effective, with tin cladding to look like the offices of the island soldiers, which double as a screen for the projection of the volcanoes of Bali Ha’i, and a cockpit.

The stage pieces include the balcony of Emile de Becque, occasionally rotating in circles thanks to the revolving stage floor, which becomes very effective when both Nellie and Emile have their brief soliloquies.

There is also staging for Billis’s laundry services, not to mention the fully functioning showers in which I’m Gonna Wash That Man Right Outa My Hair takes place.

The entire cast are remarkable, with the leading man Julian Ovenden being something else; his voice is tremendous.

This production is great, it provides the unique story for which it is known for while keeping elements of the time in which it was made.

True, you can’t rewrite history, but providing representation from another angle and challenging what was considered ‘normal’ is key to keeping things contemporary for modern audiences.

The film is of its time, and this production is of this time.

South Pacific is playing at the Opera House until Saturday 23rd July 2022 with an audio described performance taking place on Thursday 21st July at 7:30pm. Tickets start at £13 and can be purchased here.