Review: Rock of Ages is one show you definitely don’t want to miss 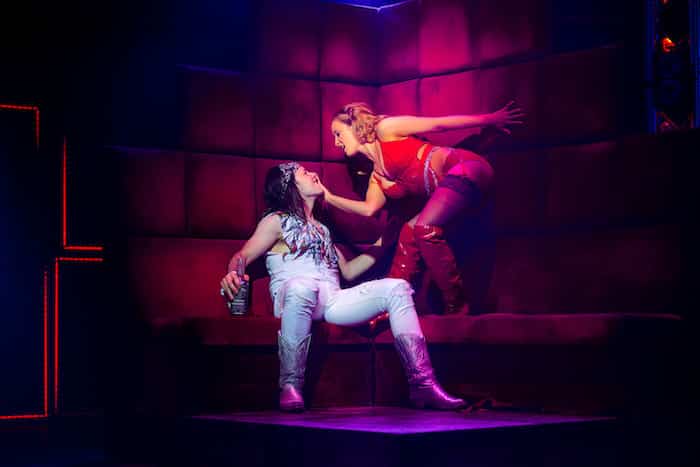 Picture the scene: it’s 1987 on LA’s sunset strip, you’ve just come from having a few drinks at The Bourbon Room, and you’re singing your heart out to We Built This City (On Rock and Roll).

But then, a suspicious man in a suit approaches you to boast about how you’d do well to give it a rest with all that ‘rock n roll’ because your beloved sunset strip will soon be demolished…

Nick Winston directs the outstanding production Rock of Ages, and births a story of passion, youth, and finding yourself within music through a tremendously multi-talented cast.

It’s almost as if there isn’t really just one protagonist, as we live through each character’s experiences on the strip – every character has their time to shine, as the spotlight centres in on them throughout.

Morgan Large’s set and costume design provides the feeling of being just as much a part of the show as the cast; leather jackets, big hair, tight pants, long skirts, heavy eyeliner, and peace symbols give the effect of walking along the sunset strip amongst these flamboyant and instantly loveable characters.

The show kicks off with Sherrie (played by Rhiannon Chesterman) as she decides to leave her small farm town, along with her disapproving parents, to make it as an actress in Los Angeles.

Predictably, it isn’t going to go as planned because that would be too easy, but throughout the production, whimsically light-hearted Sherrie teaches us about the excitement, disappointments, and the laborious nature of working towards a dream against the odds. 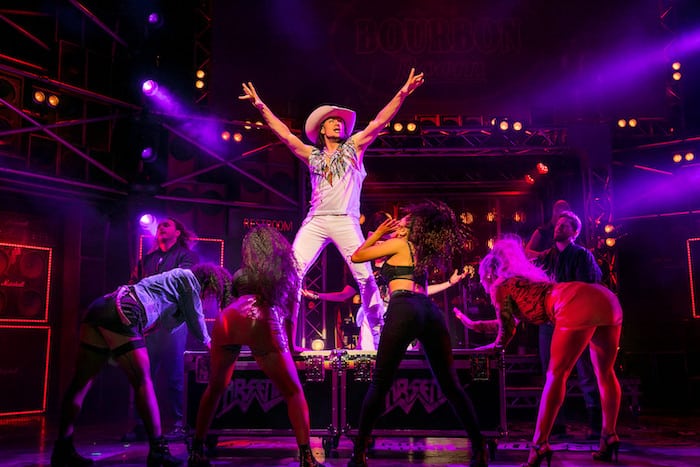 Of course, no production about the sexually alive sunset strip would be complete without a slightly star-crossed romance blossoming before our eyes, would it?

Good guy Drew (played by Luke Walsh) comes to the rescue as he spots Sherrie on the street corner when she arrives on the strip and is promptly mugged; Drew begs Dennis (Ross Dawes), owner of The Bourbon Room, to take Sherrie in as a waitress, and after a little bit of convincing (by convincing I mean, Sherrie bends over and Dennis suddenly changes his mind and decides they do need another waitress) she’s got a job and somewhere to stay – halfway there, right?

Greedy politician, Hertz (played by Vas Constanti), plans to demolish the strip which symbolically represents the destruction of expression through music, and sexual freedom. However Dennis, the fearlessly vibrant Lonny (played by Joe Gash), and the eccentric Regina (played by Gabriella Williams) scramble to find a way to stop their beloved home and livelihood from being torn away.

Will peaceful, and some not so peaceful, protests, an emergency concert delivered by on-screen sleazeball Stacee Jaxx (played by Kevin Clifton), and a realisation that fighting for what you believe in is always worth it, save the beloved sunset strip? 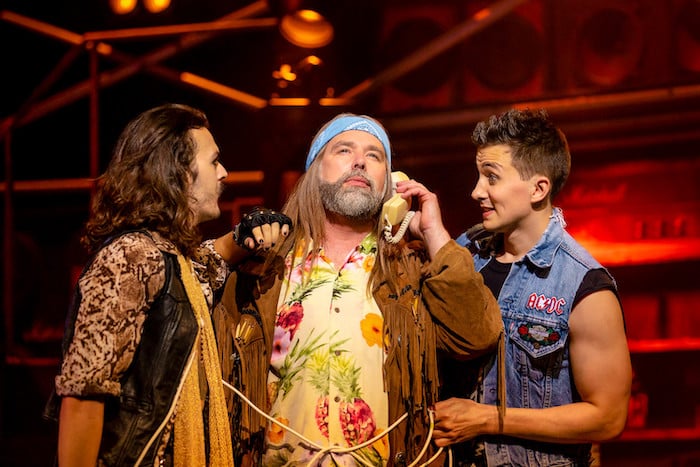 With outstanding choreographed dances, glass shattering vocals from Justice (Jenny Fitzpatrick), owner of Venus Gentleman’s Club, as many sexual innuendos you could ever want, and important life lessons delivered through the comedic talent of the beloved, and sexually charged, character of Lonny, this production is one you definitely don’t want to miss.

Lonny said it best, when he told the audience: “That’s the thing about the strip; the dreams you come with may not be the ones you leave with – but they still rock!”

Rock of Ages is at the Opera House until Saturday 9th October 2021. Tickets are available here.