Review: Rain Man at The Lowry 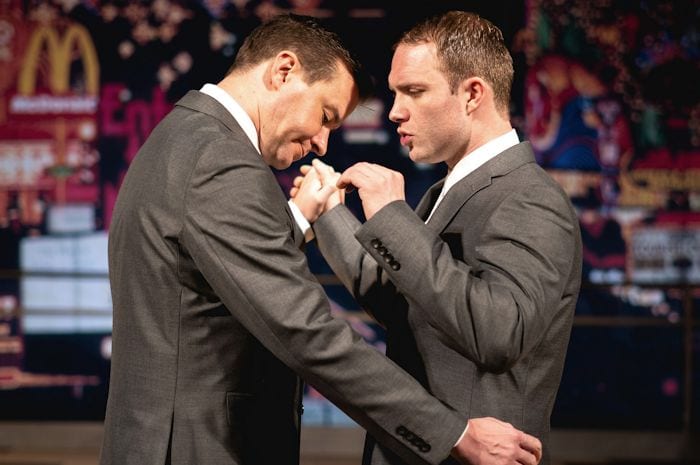 Screen to stage adaptations attract audiences because essentially what you have is material that’s tried and tested.

So it’s no wonder that shows like Dirty Dancing, Ghost, Footloose, Flashdance, The Graduate and Hairspray have packed audiences into theatres.

Barry Levinson’s hit 1988 movie Rain Man secured an Oscar for Dustin Hoffman and proved that Tom Cruise could do far more than flash his pearly white teeth and run like the wind.

It’s a road movie which explores the relationship between two brothers who are like chalk and cheese. Charlie (Chris Fountain) is a fast talking, foul mouthed wide boy whilst his brother Raymond (Adam Lilley) is autistic and lives his life with a regimented order to everything he does.

In true Hollywood style, they take a road trip of discovery and Charlie ends up realising he loves his brother more than life itself.

All of the lines from the movie that you know and love are here as are the locations, including the Vegas Casino where Charlie takes Raymond in the hope that he can bag some dollars by counting cards.

Jonathan O’Boyle’s direction really comes into its own when the brothers meet because the two actors are given a chance to embrace the material. They both take this opportunity to avoid merely impersonating Cruise and Hoffman.

There are two very good reasons for seeing Rain Man at The Lowry. They are Chris Fountain and Adam Lilley.

Chris Fountain is excellent as Charlie the selfish younger brother because he gives him light and shade. His anger is understandable as he does not know what to do for the best. He has an older brother who in many ways feels younger and he wants to love him but does not know how.

Adam Lilley is understudying for Paul Nicholls and has played the role before. And you can tell. He has great comic timing but it is in the play’s quieter moments that he excels. There is superb chemistry between these two actors, and to be honest it is this that keeps you hooked even when the production feels a bit ordinary.

Both actors bring poignancy to the piece. At the play’s close you may even shed a tear because you believe that they are brothers-in-arms at war with the doctors who want to keep Raymond institutionalised.

Some elements of the production seem a bit at odds with the sentiments behind the original film.

The choice of music is ill thought out. People Are Strange is used to introduce Raymond, which not only feels like a stage version of Speak and Spell but is also patronising. The music is also used to fill in gaps for the scene changes of which there are so many that the play keeps stopping and starting, just like when the tracking used to go on your old VHS recorder.

So even though it takes you back to 1988, it is clearly not the intended effect. Dropping items from the ceiling or a revolving set would give much smoother results.

There does come a point when you realise that this is essentially a photocopy of the film itself and not really a play. And its depictions of autism feel rather dated. But it is a period piece and its heart remains.

Rain Man is at The Lowry until 16th March.