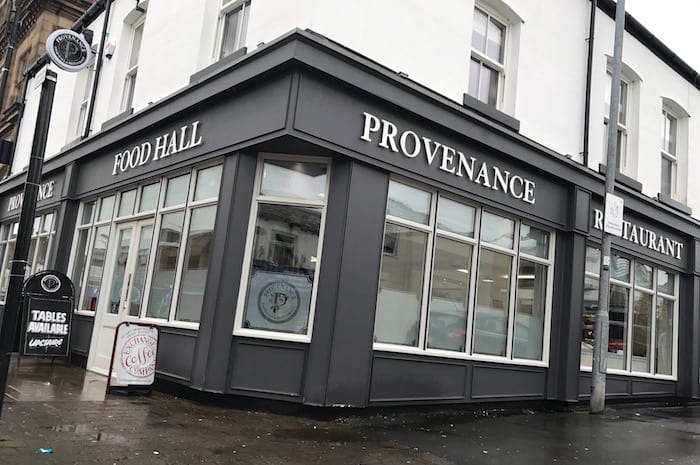 Fifteen miles north west of Manchester is the former mining and cotton town of Westhoughton. It’s also known to locals as Keawyed (Cow Head) City because, according to local folklore, when a farmer found one of his cows with its head stuck in a five bar gate, he sawed off its head instead of sawing through the gate, as the cow cost less than the gate.

Now it’s home to Provenance, one of a select few restaurants in Greater Manchester which made it into this year’s Good Food Guide. Head chef Lewis Gallagher is also making a bit of a name for himself. He’s won a number of awards including North West Young Chef of the Year 2012 and runner-up at National Young Chef of the Year.

Our expectations were therefore high when we set off on the short trip up the A6. Luckily, the car has sensors as parking proved to be pretty tight in these parts, but once inside this prime site on Market Street we found a ground floor food hall that is spacious and open. The butcher, greengrocer, bakery and delicatessen supply the upstairs restaurant with locally sourced, quality ingredients. Provenance by name and by nature. Good start.

When we moved up to the first floor restaurant the airy feel continued, although it could do with a bit more homely warmth to distinguish it from the food hall and make it more comfortable and plush. But it’s nice enough, with a menu offering a version of ‘northern fine dining’ consisting of classic northern fare such as sausage and mash, and fish and chips, as well as more upmarket dishes such as chateaubriand and lobster. But no cow head.

Of the starters, the Curried Scallops (£10) was an interesting choice. Although cooked just over, the flavours were subtle and well balanced and not overwhelming at all. Pickled cucumber added great texture and sharpness, but the star on the plate was the mini onion bhaji.

Black Pudding (£6) was a hearty little number with a nice surprise of smooth mash potato beneath the slab of pudding, propping up a perfectly runny poached egg smothered in creamy hollandaise. A starter that jumps in at the deep end of proper northern fine dining.

The generous quenelle of Chicken Liver Parfait (£6) with pear chutney and toasted sourdough was rich and smooth, almost like a luxurious foie gras, and a definite step up from your bog standard pate starter.

Chicken Broth (£12) was the main course I was most excited about having been brought up on soups and broths. Unfortunately, this one was a bit hit and miss. A decent stocky broth with some perfectly cooked pearl barley gave the dish great bite. The chicken was moist but unmemorable (as is often the case with breast), and overcooked sage dumplings, one of which I couldn’t get my knife through, were a disappointment.

I wished I had chosen the Crispy Duck Breast (£18) ordered by one of my companions. It was easily the main of the day, giving me a severe case of duck envy, and came complete with some cracking accompaniments – creamed cavalo nero cabbage, smoked bacon, wild mushrooms and gloriously buttery gnocchi.

The Posh Shepherd’s Pie (£11) was a fine example of a modern interpretation of a traditional British dish. It was made from prime shoulder cuts of lamb rather than the typical minced meat, proper mashed potato which absorbed the juices from the meat, and a side stack of roasted carrots with a sweet glaze. A little deconstructed and maybe not the textures you’d expect from a typical shepherd’s pie, but pleasing all the same.

Having spent much of his earlier career as pastry chef at Stanley House in Mellor, desserts are chef Lewis’s speciality  This was evident in the classic British dessert Rhubarb & Custard (£6) reimagined as a fantastic vanilla creme brûlée with sweet and brilliantly fruity rhubarb. The only fault was with the sorbet which tasted more like blueberry than rhubarb and had no place on the plate.

Chocolate Orange Bread & Butter Pudding (£6) was another successful take on a classic British dessert. What a beauty. Only spoilt, yet again, by the blood orange sorbet which tasted more like strawberry. It didn’t come as a surprise when we later found out the ice-creams and sorbets are being bought in while Lewis is waiting on an important piece of kitchen equipment that is clearly urgently needed.

This wasn’t a problem with the Sticky Toffee Pudding Sundae (£5) which consisted of warm sticky toffee pudding pieces in a sundae glass thrown together with vanilla ice cream, butterscotch, whipped cream and toffee sauce. Not the most elegant of desserts but one to get stuck into.

We drank a couple of decent wines recommended by in-house sommelier Stuart – the tongue-twister of a mouthful Wollomooloo Chardonnay (£4.25 175ml) was big enough to handle the starters but our supping winner was the Louis Latour Pinot Noir (£45 Btl) well-rounded, silky smooth, elegant, and very easy drinking lunchtime red.

Service was friendly and informal and the staff are obviously passionate about their product but the divided spaces of the restaurant and low music make for a more formal feel with little privacy. We were scared to raise our voices after one couple sat at the table next to us unsubtly moved into the next room. This probably wouldn’t be the case in the evenings but when we went at lunchtime it felt more like a food hall with a restaurant. Nothing that a few ambient tweaks and soft furnishings couldn’t sort out.

Provenance has glimmers of promise and moments of excellence, and Lewis is clearly a very accomplished chef. It’s a fine line between fine dining and giving people what they actually want to eat. Although they’ve pitched it well here, the menu does seem a little safe. Maybe they could put something quirky and more memorable on the menu. Anyone for cow head?