It's the perfect antidote to the cute and cuddly romantic comedies you see on Netflix, as this one has teeth 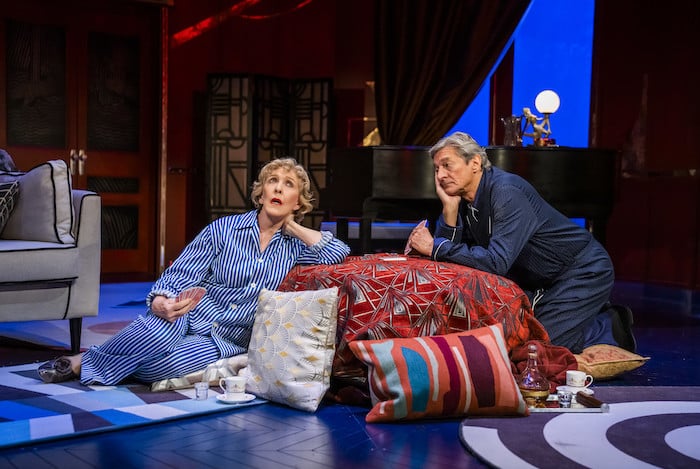 This latest production at The Lowry, directed with aplomb with Christopher Luscombe, stars two beloved actors of stage and screen, Patricia Hodge and Nigel Havers.

This is one of the plays that audiences return to time and time again because it’s a blueprint of the rom coms we now know and love, but the characters have lines to die for courtesy of Coward, who remains the master of cutting comedy.

Amanda (Patricia Hodge and Elyot (Nigel Havers) are divorcees who have since settled down, or at least attempted to do so with their respective spouses.

They inadvertently visit the same hotel whilst on their honeymoons – and they soon discover that their love for each other has never really died.

They reminisce and realise that they enjoyed their challenging relationship, and that Victor (Dugald-Bruce Lockhart) and Sibyl (Natalie Walter) are not going to do as replacements for that old devil called love.

The romantic comedy tropes that we recognise are all here intact.

Walter’s Sybyl is high pitched, needy and whiny, and Bruce-Lockhart’s Victor is faithfully gormless, so when these two are caught in the crossfire, we laugh along, as we are rooting for the witty and sophisticated pairing of Hodge and Havers as the ‘cruel to be kind’ twosome who are made for each other.

Christopher Luscombe knows that this play is a crowd pleaser and he directs with pace and respect for the original material.

He also ensures that these skilled actors deliver their lines like heat seeking missiles, and the comic timing is spot on throughout.

Aïcha Kossoko is delightful as maid Louise who witnesses the destructive relationships and she has a ring side seat. Natalie Walter and Dugald Bruce-Lockhart could just sit back and allow the leads to steal the show, but instead, they amp up their roles and do far more than simply play it for laughs.

Patricia Hodge revels in the gifts that Noel Coward gives her but she does more than just deliver. Her comic timing is so on the money that she manages to pause and make you wait, and then you have time to savour the experience, like a fine wine.

Nigel Havers has played many a cad before, but here, he has such great chemistry with Hodge that he is able to play a game of verbal tennis, hitting the words back and forth until they land.

The result is a laughter-fest and you really believe this couple exists.

Simon Higlett’s set is gloriously over the top, with red velvet which highlights the love/anger strands of this destructive relationship and the fact that this couple are horribly likeable and familiar.

Their garish, yet glorious Paris flat becomes a battleground and slapstick comedy ensues.

If you are seeking something familiar, which reminds you of days gone by with a script that still sparkles, then Private Lives will leave you with a big smile on your face and it is the perfect antidote to the cute and cuddly romantic comedies you see on Netflix and other streaming services, as this one has teeth.

Private Lives is at The Lowry until 19th February 2022. Tickets can be booked here.