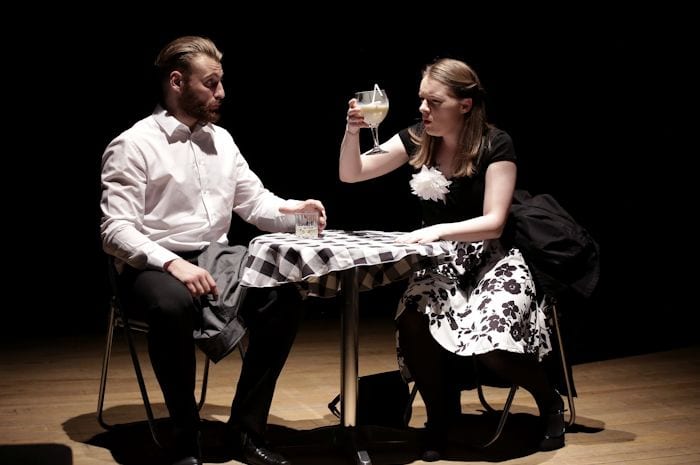 There’s something alluringly cinematic about Alan Ayckbourn’s Private Fears in Public Places. One of the great playwright’s later works, he intended it to be a ‘film for stage’, originally consisting of 54 short scenes, focusing on six different people and their separate yet overlapping lives.

No wonder it was made into an award-winning 2006 film directed by Alain Resnais.

Dick and Lottie Theatre Company brought a faithful and hard-hitting production of the 2004 comedy to the Salford Arts Theatre, as part of this year’s Greater Manchester Fringe.

Walking into the theatre, what was immediately evident was the layout of the seating on three sides of the stage, emphasizing the compartmentalised nature of the set. This immediately established the mood of the play – a sense of compartmentalisation and domestic claustrophobia, themes often encountered in Ayckbourn’s work.

Private Fears in Public Places is famously known as one of Ayckbourn’s bleaker works. Making the interlocking lives of these mundane, largely middle-agers into interesting viewing could be considered quite a challenge. But I wasn’t just interested. I was hooked, watching life unfold in flats, an office, a bar and other domestic locations.

The set remained the same throughout. Only the lighting changed, indicating which location was being focused on.

That was all that was needed in this tour-de-force of character portrayal.

Nicola’s unhappiness is exacerbated by her boyfriend Dan’s desire for a flat with a third bedroom to be his ‘study’ – despite doing little to help with the search.

Dan enters with swaggering pomp, with Andrew Goulding managing to balance the character on the fine line between exasperating and endearing.

This is something each actor seemed to celebrate in an appropriately underhand way; the multifaceted nature of human beings. There are no stock characters here, no archetypes. Each character has their own hint of mystery we can’t quite get our heads around.

Thanks to John Cotgrave’s direction, each actor embraced both the ordinary and the odd simultaneously, allowing the audience to appreciate the inconsistencies and unexpected elements that are actually integral to human nature.

Dan often drinks in hotel bars, served by seemingly loyal bartender Ambrose. Actor Richard McArtney crafts a real sense of stoicism to the older Ambrose: his hand movements, eye contact, gestures of care, all suggesting a man who ‘just gets on with things’.

Only, Ambrose is having to get on with quite a lot, as at home his elderly father is becoming increasingly difficult to deal with, scaring nearly every carer away.

Helping us to appreciate the variety in everyday existence, this play maintains a steady pace, even without an interval. No one character feels more important than the other, and their stories and scenarios warrant interest enough to make each one of them captivating.

Maria Sykes’ portrayal of the seemingly disciplined and pious Charlotte deserves a special mention. Soldiering on with her head held high, the façade starts to flicker a little as the play progresses. The audience sense that there is something unnerving going on beneath that intense, expertly portrayed stare. A sneaky smile, and a stunning shot involving more than a little PVC is all you need to know.

This is a play where people are misread and miserable – but also mischievous and much-loved. It’s a difficult dynamic, but Dick and Lottie mastered it.